Before electric or motorized coal cars, pit ponies were the muscle used to haul coal cars to and from the surface of the Altas mine. The relationship between pony and miner was complex — probably much like the relationship between a working dog and partner/master. Stories about the intelligence of these ponies flowed like water during our tour. For example,

The little ponies were smart, maybe too smart! One little pony knew how to disappear behind coal cars or machinery in the mine. He would stand still all shift and avoid detection. At the end of the shift, when the other ponies were returning to the stable, he would quietly step out of his dark hiding place and join them. — Source: oral history 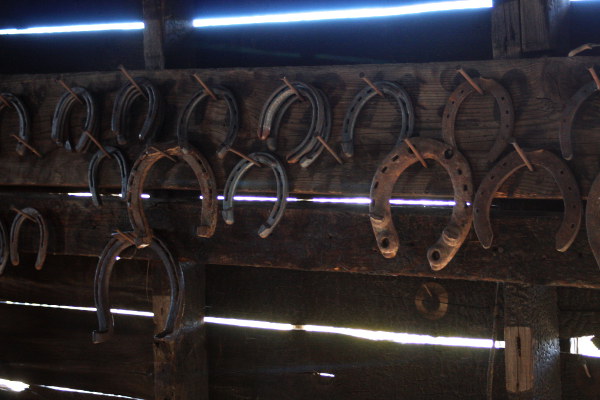 A small building for the blacksmith was built on the hillside. It was the blacksmith’s responsibility to take care of the ponies. These little animals stayed underground for most of the year.

Our guide tells us that ponies needed to pasture at least once a year as a “holiday.” These times were often stressful for the little animals because they were familiar with a confined life in the mine and not the wide-open spaces that a field provided.

On the wall in the bathhouse is the story of Love Star — one of the pit ponies from the Atlas Mine. It is a further testament to the complex relationship between horse and owner. 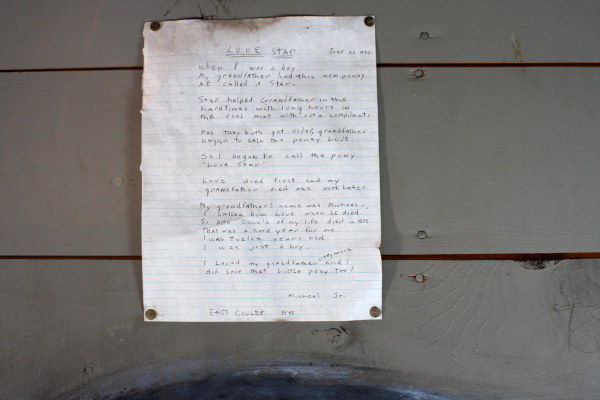 When I was a boy.
My grandfather had this new pony.
He called it star.

Star helped Grandfather in the
hardtimes with long hours in
the coal mine with out a compilant.

Has they both got older, grandfather
began to call the poney Love.

So I began to call the pony “Love Star.”

Love died first and my
grandfather died one week later.

My grandfather’s name was Micheal.
I called him Love when he died.
So both Love’s of my life died in 1939.
That was a hard year for me.
I was twelve years old.
I was just a boy.

I loved my grandfather very much and I
did Love that Little pony too!