The people are different in this area. They have a different look in their eyes than all the other people I have encountered thus far. It is as though the horrors of war have taken their innocence away and weighed them down. The women are all different. I would like to say they are stronger, but that is not entirely true. I guess harsh would be a good term. Many of them have had to find their own way without their husbands, who have gone off to war or who have died. They are self-reliant because the war has eaten into their stock of men and boys.

I rented a bicycle and this is how I got to Mihintale. It was a long ride: 11 km and there was a bicycle race going on so people lined the streets in places. People cheered as I biked past and more than once they wanted to splash water on me like they would the racers. At one point I stopped at a little shop to have a coconut. The man running the shop was missing one of his arms, either from war or from a mine. He was really interesting to talk to. He told me to watch the locals and if they all disappeared then I should run and hide because something was about to happen. Good advice coming from a stranger.

By the time I got to the temples I was glad to wander around under the shade of the trees. There is a lot of climbing involved in seeing the sites and shouldn’t be done during the hottest part of the day. As you come into the area there is a sign that reads: “Mihintale Sanctuary, No Shooting!”

This is how the story of Mihintale goes: While hunting in the hills around Mihintale (247BC) King Tissa encountered Mahinda, the son of the Buddhist emperor Ashoka. After meeting the two had a conversation during which Mahinda did an “intelligence check” on the monarch and determined that he was “worthy” of the Buddhist religion. Mahinda then delivered the Chulla Hatthi Padopama Sutta, which sums up the essence of Buddhism in a “nut-shell”. After this King Tissa embraced the Buddhist religion and the religion spread quickly throughout the island. This paved the way for the arrival of Arahant Maha (Mahinda’s sister) who came to Lanka bearing the sapling of the Sri Maha Bodhi Tree from Buddha Gaya, India. The Bodhi Tree is the tree that Buddha was sitting under when he gained enlightenment.

There a whole cluster of sites you can visit in Mihitale. This is merely a taste of what can be seen:

Mahaseya Dagoba: This is the largest of all the Stupas in Mihitale and is said to contain the “Artefact of Mahinda,” or a piece of his body. The Dagoba is located on a hill and from here you get a great view of Anuradhapura and the surrounding landscape. 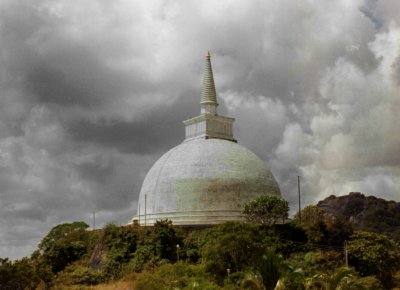 Mahinda’s Bed: This is the spot where Mahinda is said to have waited for King Tissa to appear. I sat here for a while and just looked at the view. There was no one around and it is really quite peaceful, but perhaps a bit windy. 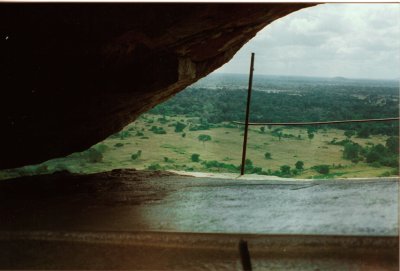 Meditation Rock: The most challenging place to get to is the meditation rock. From here you can see most of the sites and also a breathtaking view of the area surrounding the sacred area. The biggest reason to go up here is to see the large Buddha statue in the distance. This hike is not for the faint of heart and my sandals barely made it to the top! 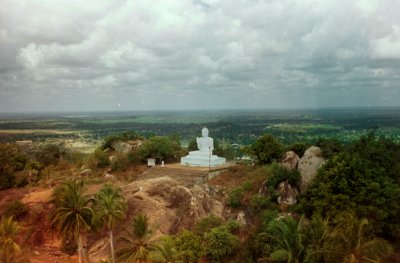 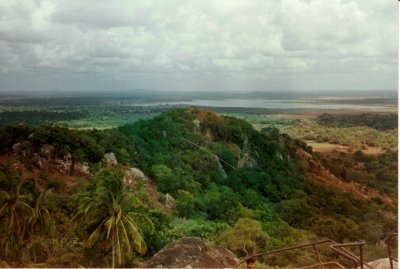 There are also a number of other temples, shrines, and monk repositories at the site. The area even has a few crooked monks and a loudspeaker blaring instructions in Sinhalese. One of my favourite parts of the whole thing was the bathing pools: a beautiful view, a beautiful pool and a peaceful spot. I sat here for a while but then headed back to Anuradhapura. On the way out I saw many locals who were missing limbs or were badly scarred. There is an eerie quiet about the place that left me feeling uncomfortable like life was holding its breath waiting for something to happen. 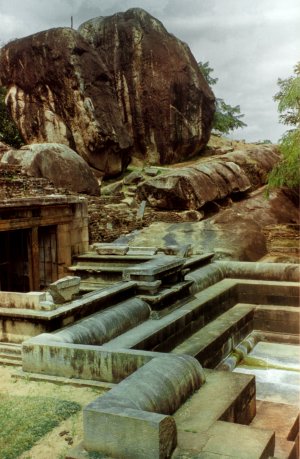