As mentioned in my last post, we were overwhelmed by how much is in the Louvre; so, I am only going to focus on three works of art in this post, which I am going to call the three ladies.

Each of the three ladies comes from a different art era, geographical location, and artistic style. Also, none are the most famous lady of all of the Louvre: the Mona Lisa. There is a separate post on the Mona Lisa Experience.

If you want to know more about the museum, check out the BBC Treasures of the Louvre, a 90-minute documentary on the history of the Louvre intertwined with the art within.

Considered the greatest female artist of the 18th century, Vigée was known to create a scandal or two with her paintings. Most notably, she periodically created self-portraits with her mouth open… showing teeth… like in the portraits below. 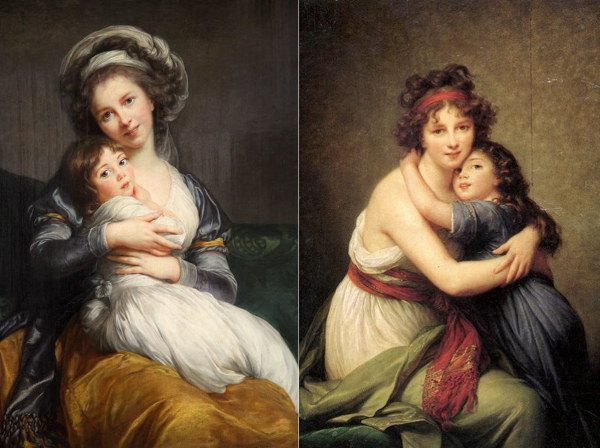 This was so taboo that it was commented upon rather disdainfully in the 1787 Mémoires secrets, the equivalent of today’s National Enquirer, but for 18th-century life.

But her style and her recognition earned her a place as a court painter to Marie Antoinette. And, after the French Revolution, while in exile, her people skills and talent put her in even more demand in Italy, England, Russia, Poland, Switzerland, and Austria. She became a member of the academia in most of these countries and painted portraits for aristocrats and royalty.

When she fled France, she did so with her beloved daughter Julie who appears in many of her self-portraits, which tells me that Julie played a very important part in her life. This is what I find so appealing in her portraits: the mother/daughter connection, the trust Julie appears to put in her mom and their adoration of each other. Their relationship is that of a single mother and her daughter.

Unfortunately, according to history, this close relationship did not last. While in exile in Russia, Julie fell in love with a Russian aristocrat whom her mother did not approve of. But, Julie married him anyway by getting written approval from her estranged father. The marriage did not last and Julie was condemned to the fate of a divorced woman in the 18th century: no longer marriageable and to a life of poverty.

This caused a rift between mother and daughter that was never fully repaired. Though, this may be history’s gossipy version of events. The relationship is likely more complex than what was written by outsiders.

While hundreds and hundreds of people mobbed the Mona Lisa, we stared at another lady, The Lacemaker; and, we’re completely alone in that part of the gallery as we pondered her beauty. Completed by Johannes Vermeer between 1669–1670, this is one of the few Vermeer paintings to make it to the modern-day. In total, only 34 paintings are attributed to him, of which only two are in the Louvre: the Lacemaker and the Astronomer.

It’s suggested that Johannes Vermeer used a camera obscura to get the detail needed for The Lacemaker. I’ll admit that it does look like a photograph with the framing, focus, depth of field, and perspective detail. 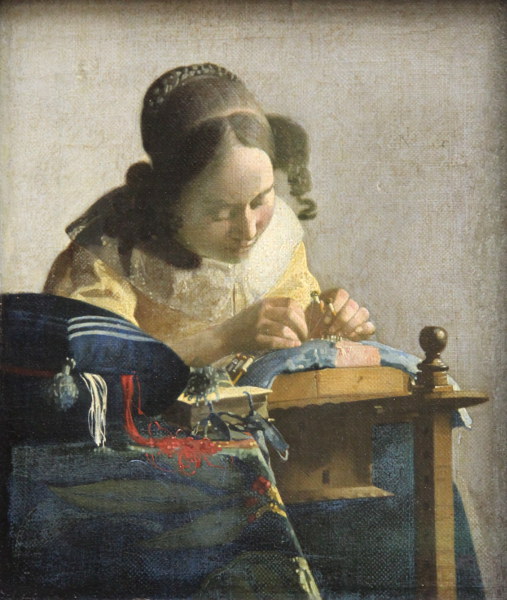 Vermeer preferred to paint low key moments in everyday life rather than grand historical moments and because of this, he was not a popular painter until the 20th century. But, once he gained recognition, his works became the most sought after and forged art in the world. And, one painting is on the INTERPOL stolen art list: The Concert, nicked in 1990 and said to be worth up to $300 million. It’s the most valuable missing painting in the world.

As legend would have it, Mary Magdalene lived in exile in la grotte de Sainte Baume, now a sanctuary and extremely popular pilgrimage destination in France. Here she lived naked in the cave with her long hair as her only covering. And, everyday angels would come to earth and lift her up to the sky so she could hear their beautiful singing.

This limewood statue is from a scene depicting the popular Sainte Baume legend and is thought to be part of a grouping that included Mary, an encasing, and a series of angels that held the statue of Mary to the ceiling. The work is attributed to German sculptor Gregor Erhart (1470?–1540) and dates to roughly 1510 (the actual date is not actually known). 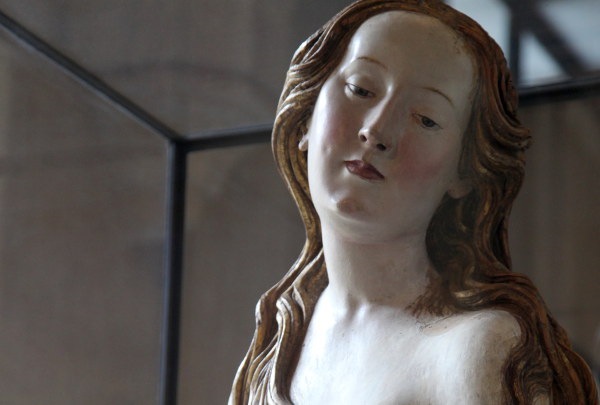 It makes me really happy to say that this is one ange au plafond that was not destroyed during the Calvinist iconoclasm of the 16th century. No one knows it’s exact history other than it quietly stayed hidden away somewhere for centuries and eventually found its way to the German art market and was sold to the Louvre in 1902. Images of the full statue are in the gallery.

0 comments on “The Louvre: Three Lady Portraits”Add yours →