Founded in 1899, the cemetery was an integral part of the growth of early Hollywood. Paramount Studios was built on the back half of the original Hollywood Cemetery, where the studio is still in operation today. The cemetery of choice for most of the founders of Hollywood’s great studios, as well as writers, directors, and, performers, Hollywood Forever Cemetery is now listed on the National Register of Historic Sites. — Hollywood Forever

While Westwood Memorial is small and peaceful, Hollywood Forever is a massive, sprawling 62 acres of unending memorials, mausoleums, and grave markers. It’s fairly easy to spend an entire day just wandering around (while I was there some people opted to drive from section to section rather than walk).

Before arriving, it’s best to download a map of the cemetery… one with the names of the graves you want to visit.

I’ve written about the cemetery already, in Hollywood Ramones. What I didn’t mention in that post is that every weekend there are movie screenings in the cemetery. The Night Of The Living Dead is often shown in 3D in memory of Johnny Ramone. While on the Hollywood Haunted Tour, the guide asked if I would attend the viewing with him after the tour, which struck me as being way creepier than watching a 3D zombie movie in a cemetery.

What I want to attend is the yearly Ramones memorial concert [link removed]. I’m not sure how I missed it last summer… (*sarc* I was probably flying that weekend).

But I digress. Below are some other sights.

I happily discovered a reproduction of Antonio Canova’s Psyche Revived by Cupid’s Kiss in the Garden of Eternal Love.

While I was photographing the statue, a woman screeched up in a car, jumped out, and frantically asked, “so which famous person is buried here?” Me: “No one that I know of. But the statue is beautiful.” She promptly made a strangled pffft type noise, jumped in her car, and screeched off to the next section. 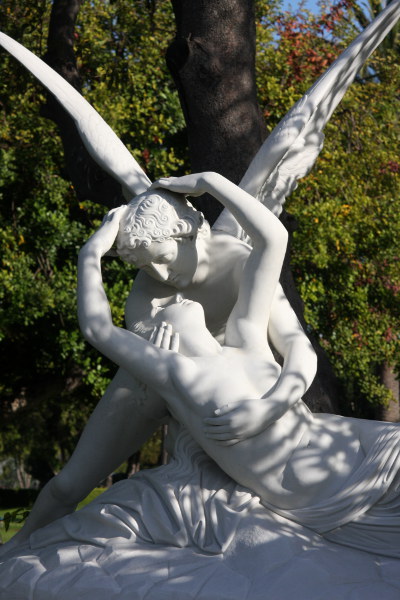 Myrtle Waters Ivey almost lived to be 101 years old. I like the way the ivy drapes itself over this mausoleum. 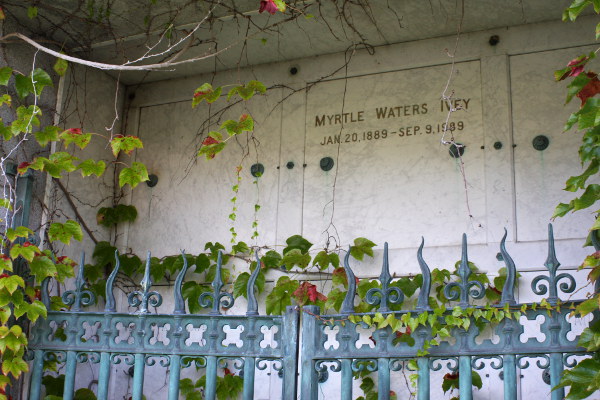 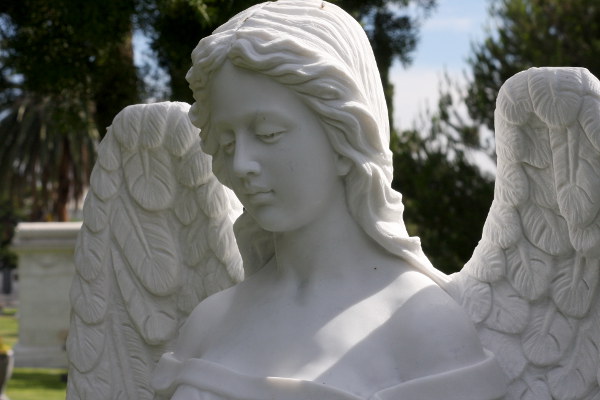 Inside the Valentino Mausoleum, you’ll find statues of the Twelve Apostles watching over the residents. It’s a very beautiful mausoleum, but I had to leave because it made me feel breathless and sick. 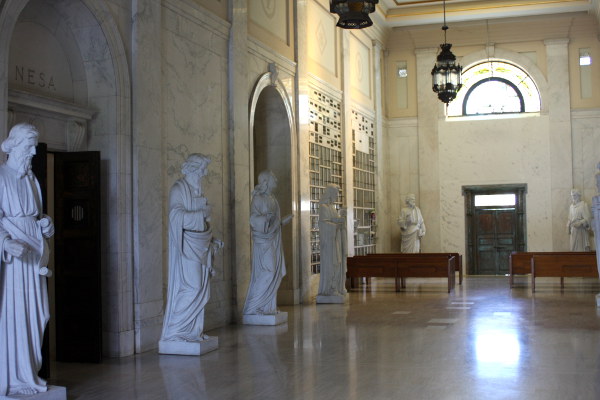 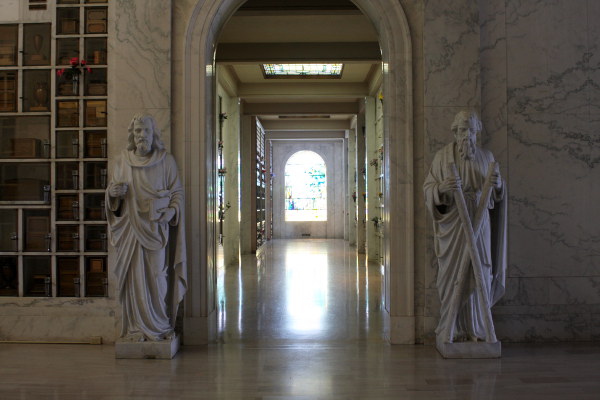 Not sure where this statue comes from… 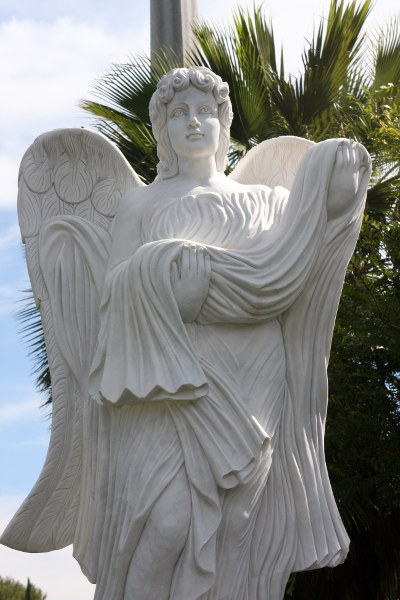 The Swayze Mausoleum for Wilbur F. Swayze. He was a prominent Los Angeles businessman — and a Canadian. 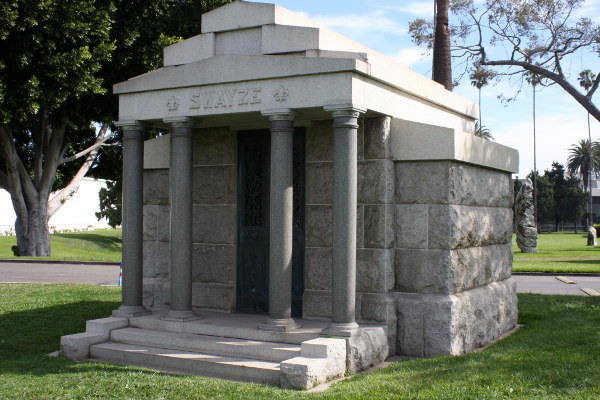 Carl Morgan Bigsby was “retired by God” and a “recognized leader in many phases of the graphic arts.” Details about the Atlas missile are written on the side of the memorial. Carl died shortly after the missile launched, the choice in memorial may have been to waymark a significant moment in history. 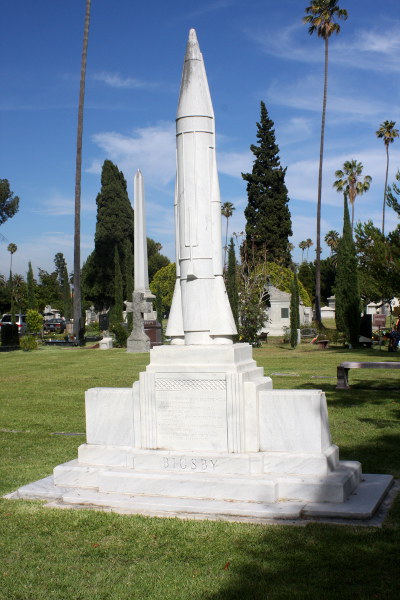 Charles Spencer Chaplin Jr. (5 May 1925 – 20 March 1968), the son of Charlie Chaplin and Lita Grey. He’s buried with his grandmother Lillian Grey. I singled him out because of his birthday: May 5, 1925. And, because someone is still adding fresh flowers to this small innocuous grave… someone who remembers. 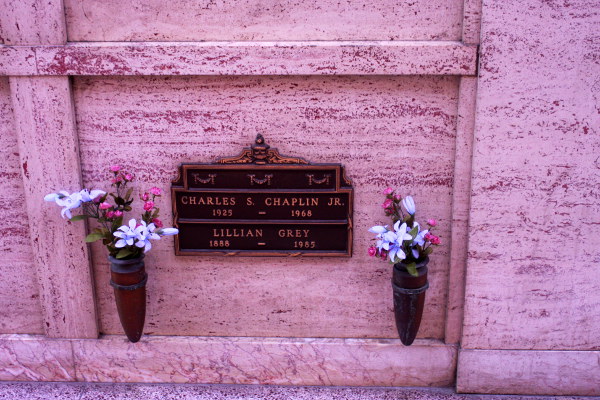 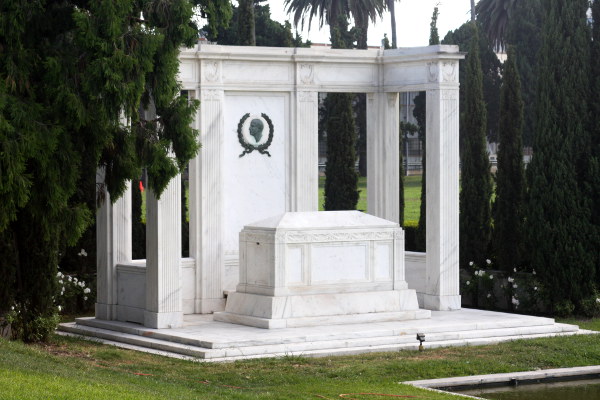 3 comments on “Hollywood Forever”Add yours →