As a wonderful (and scary) end to the Voodoo Authentica presentation, I partook in a New Orleans ghost tour. The tour was an “after dark” dealie, started at 10pm and all the tour participants got a set of “protective” beads meant to ward off clingy ghosts. The very large HOW group split into smaller groupings of about 20 people and each left with their respective tour guides.

I’m trying to think of a diplomatic was of describing our tour guide and will draw upon the insightful words used by others in our group: “a cheerleader on acid” and the “worst camp councilor ever” were a few of the stickier descriptions that came out. In all, the stories were fake, we were rushed, and after begging for a tip at the end we were ditched in the middle of New Orleans with the ominous warning: “don’t walk anywhere because the city is the most violent in NA.” Needless to say, there were a lot of angry people wandering through the streets after dark and trying to find their way back to the hotel.

Moving past this, there were a lot of great stories that came out from others on the tour and also from locals we ran into; stories about the city and its haunted past.

New Orleans has a dodgy history full of mystery and myth. It all started with the French, who wanted to get rid of their murderers, rapists and other violent criminals, and did so by shipping them off to swampy New Orleans. People quickly disappeared into the swamps without a trace and the area developed a reputation for being haunted (New Orleans was originally an Indian burial ground). Add to this history a couple of large fires that killed off substantial numbers of people and you have a recipe for lots of negative energy.

Some of the most heinous crimes in North American history occurred in New Orleans, and because of this many people believe the city is cursed. During the tour we learned about the LaLauries and the Octoroon Mistress. We quickly passed through the “Mad Butcher’s House” (now a bar), which we a quick beer and bathroom stop.

The LaLaurie Mansion and it’s story is considered one of the most gruesome of the city; the building is also said to be one of the most haunted in the French Quarter. This house was built by Dr. Louis and his sadistic wife Delphine. Over a period of many years servants would suddenly and inexplicably disappear without a trace.

During a dinner party in 1834, a servant set the kitchen on fire, possibly in hopes of attracting attention to the house. This was a tremendous sacrifice to her because she was chained to the stove. When the fire department arrived they discovered hideous atrocities in the attic: buckets of body parts, inhumane experiments in the midst of being carried out, people chained to the wall or locked in small cages, people with their innards spilling out and mouths sewn shut, people missing limbs and so forth. After this discovery and the sudden fleeing of the house’s owners (they’ve never been caught), the house became a spiritual hot bed and hot potato as it changed hands many many times over the next century. Recently, during renovations builders found a hastily built graveyard that is thought to have been the dumping spot for many of Delphine’s victims. 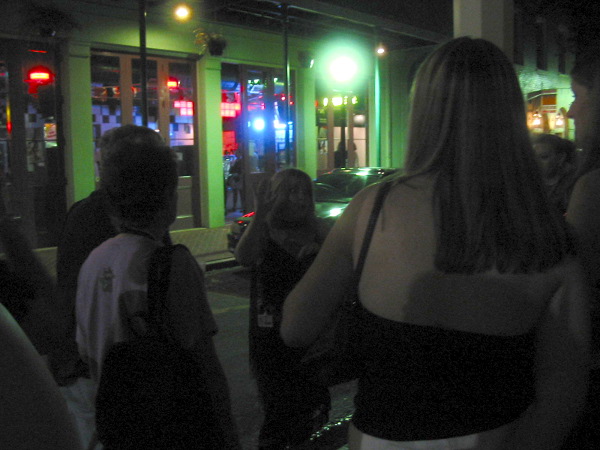 While the LaLaurie Mansion is one of the most haunted abodes in the city, Julie “the Octoroon Mistress” is one of the most active ghosts in New Orleans. She resides in a teashop on Royal Street called the Bottom of the Cup Tea Room. In life she was the mistress of a wealthy French Businessman. Being that she was 1/8 black (octoroon) she could not marry this nobleman lest he be shunned by society (it was illegal in N.O. to marry a person of coloured ancestry).

After years of fighting over the issue, the French Businessman finally agreed to marry Julie if she could manage to stay on the roof of their house naked for an entire night. She was determined to marry the Frenchman and traipsed up to the roof, naked and set upon remaining there for the entire cold and wet December night. Her husband to be was busy entertaining guests and forgot about both the deal and Julie.

Julie did manage to stay on the roof for the entire night, but because it was a wet blustery December night she died in the process. The Frenchman found her body the next day still clinging to the side of a chimney where she often still appears to passersby on cold days. When it’s not cold she is very active in the house, which is now a teashop. She is said to be a very mischievous ghost who likes to draw attention to herself and will appear when called upon.

Finally, one interesting thing I learned on the tour is about N.O. graveyards. About 90% of the graves in New Orleans are above ground because the water table in the city is so high that it is impossible to bury underground without losing the body to the river. Also, the soil in New Orleans is so acidic that bodies decompose fast; so, a family crypt can house the graves of generations without overcrowding. These graveyards with their crypts are often referred to as cities of the dead because the graves are like little houses.