We were here for the ice cream. As we ate, we wandered amongst the buildings and perused the Main Street Project write-ups affixed to many of the buildings.

From one such write-up:

Woo’s General Store stands on the site of a shoe repair shop begun by Charlie Woo and his brother Bill in 1936. They came to Canada in 1918 from Canton Province in China. Life was very difficult for Chinese immigrants at that time. The Canadian government required each immigrant to pay a head tax of $500 and their families were not allowed to live in Canada until 1947.

With its buff-colored brick, raked mortar joints, and overhanging canopy, this remarkably well-preserved storefront is the only local shop in a recognizably 1950s style and has been featured in various film sets.” 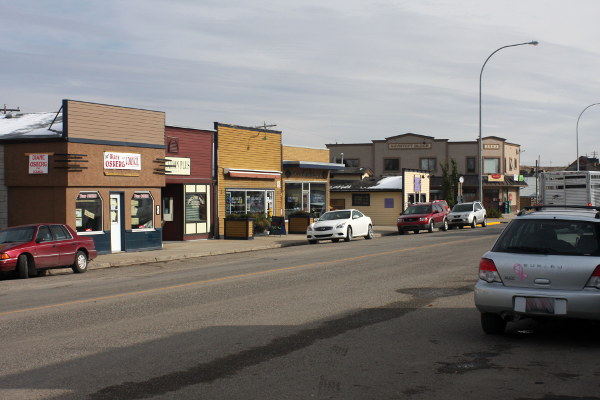 In the photo above, the white car is parked roughly in front of Woo’s General Store (the smaller building). The peach standalone building to the right of Woo’s is Jack Webber’s Pool Hall and Barbershop.

This building has changed functions several times over its lifetime. Built around 1925, it started as a restaurant, server meals to the throngs of newcomers attracted by the employment opportunities in the oilfields and at the Black Diamond Coal Mine.

Originally opened as Louis’ Cafe, stories describe it as a rough place that offered a little of everything to its customers. Legend has it there once was a sign in the window advertising “Bum Coffee, a potion consisting of coffee and a half cup of rye whiskey.”

Local police were unconcerned with the practice until a new officer arrived and charged the cafe with illegal selling of liquor. Given the choice of a fine or two months in jail, the proprietor opted for the latter, stating that he hadn’t had a holiday in 22 years! Upon his release, the sign reappeared at the back of his shop and business resumed. Apparently this tradition continued even after it was converted to a barbershop and pool hall. 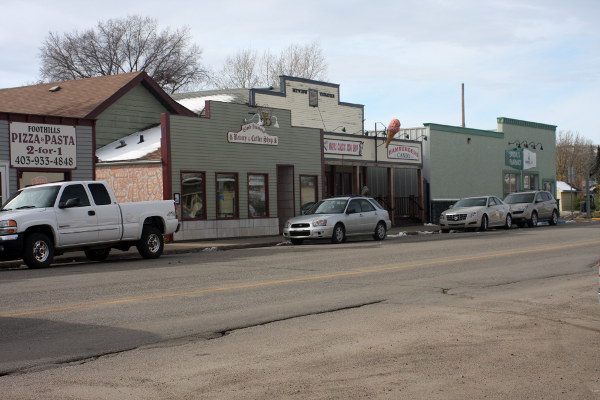 Across the street from Woo’s and Jack’s is the Black Diamond Bakery and Coffee Shop.

The Black Diamond Bakery had humble beginnings, originally operating from a private home on the corner of Centre Avenue and First Avenue in 1952. Owners George and Johana Vanysseldyks baked 80 loaves of bread daily. By 1960, the business outgrew the little house and the owners decided to move to a large space.

Instead of building new, they purchased an empty lot on Centre Avenue, left vacant after the 1949 fire. They then bought two former schoolhouses in the village of Longview and had them moved to the site. One building was originally a school for boys and functioned as a shop for woodworking training while the second was a cooking school attended by girls in the 1920s.

Finally, there’s the Stop Cafe, a cute and atmospheric place to pause for a latte, live music, and unique conversations.

3 comments on “Black Diamond, Alberta”Add yours →