The day started with a traditional Belgian practice… not mass, nor the consumption of mass amounts of chocolate, no Easter bunny or family brunch… but rather, the Tour de Flanders (a.k.a. the Ronde).

Fabian Cancellara was the winner this year; and, I found out later that Lance Armstrong was in the race, here to practice for the Tour-de-France. I was a little surprised when I discovered that I took a photo of him from my hotel room. 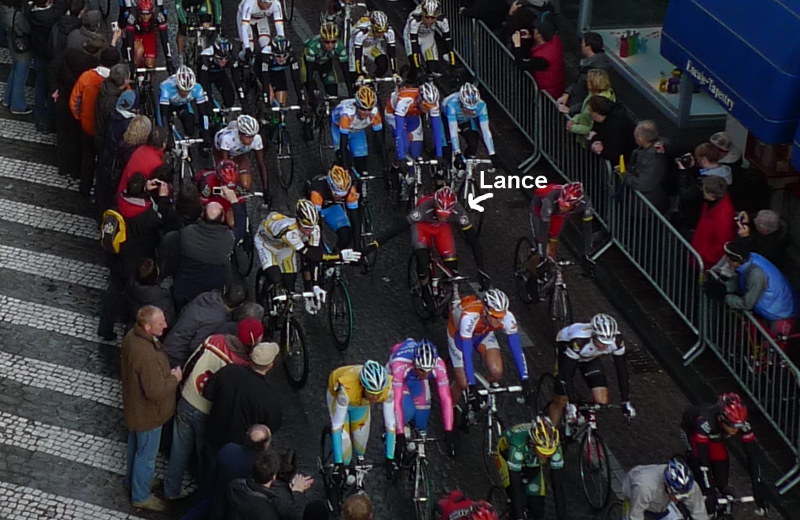 Everyone in Belgium is here for the race; and, they all appeared at 7 am with their drinking and cheering. By about 9am the streets and Markt were so packed you could hardly move. When the cyclists passed it was a rather quick blur of bikes escorted by security, police, crowd chanting (Tom. Tom. Tom.), and an entourage of escort cars jammed with spare tires, bike bodies, and parts (Shimano is still king).

After the cyclists passed, the crowd quickly dispersed into the various waffle and chocolate shops in the area.

Rather than brave the sweetshops I headed to Heilig Bloed Basiliek for Easter mass. It was conducted in five different languages and mostly songs. After people were able to pay their respects to the rock crystal vial containing the blood of Jesus. The typically known legend is that the vial appeared in Brugge in the 1200s after the destruction of Constantinople. Shortly after its arrival in Brugge, the blood in the vial dried up… but would mysteriously re-liquefy every Friday until 1325 when it inexplicably stopped.