Dunmore was an accidental discovery for us. The planned activity for the day was archery at the Countryside Leisure Activity Centre, but the wind was so strong that arrows would simply blow to the side instead of forward. So, on the way to Kilkenny, we followed a few signs that said “Cave” and showed up at Dunmore.

It took millions of years to build Dunmore but this particular cave has only been visible to people for a few thousand years; it’s thought that miles and miles of caverns exist under the countryside. In the cave, there are numerous examples of calcite formations (some of which Edwardian and Victorian collectors tried to remove using dynamite), stalactites, Victorian graffiti (which is currently being studied), and historical artifacts.

The part of the cave that’s most interesting to me as an archaeologist is the silent cache of bones hidden behind the walls and stalactites. In 928 AD, this was the site of a Viking massacre. In the Annals of the Four Masters it’s documented that Godfrey, son of Imhar with the foreigners of Dublin plundered Dearc Fearna and killed 1000 people in 928 AD.

It’s now thought that during the Viking raid, women and children hid in the small areas behind the walls of Dunmore and in an attempt to smoke them out (slavery was a lucrative business) the Vikings set fire to the cave. But, the women never left and still lay where they died. 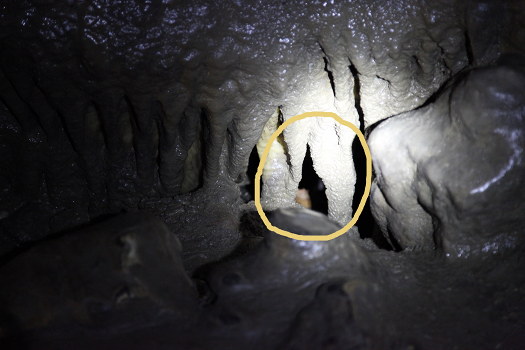 Dunmore has not yet exposed all of her secrets. It’s large, vast, complex, and every year archaeologists and staff seem to discover something new. For example, a decade ago a staff member accidentally discovered a hidden stash of treasure left behind by Vikings less than a few metres from the main path. Pieces of this are now on display in the main museum.

The people who work here are also very good at leaving things where they are found… like the bat skeleton below. The cave is home to a large number of bats and this one simply died one day and fell to the ground. Its skeleton will stay where it fell until it becomes a part of the rock. 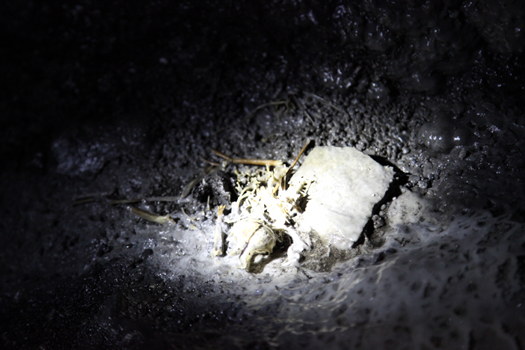 It was here that La Niña also picked up a friend: a little dog that reminded me of Heen, the dog from Howl’s Moving Castle [book]. He seems to find people that he likes and follows them around the cave.

0 comments on “Dunmore Cave”Add yours →