All paths in Stockholm seem to lead to the Palace. I ran into the building so often that I began to use its location as a point of reference.

I don’t have any memorable stories from the Palace but I will say that the Royal Guard is a little more interactive than those from Buckingham Palace in London. They will watch what you are doing and react to what is happening around them. This video is of a guard funning a little boy..

The Royal Family, Palace and Guard have been together as a trilogy since King Gustav Vasa founded the guard/police force in 1523. The palace is the oldest piece in this trilogy, though not original. The first Palace was more of a fortress and was built by Birger Jarl in the 1200s to defend Lake Mälaren. It was called Tre Kronor (Three Crowns), a name that became the national symbol for Sweden.

In the 1500s, work was done to turn the fortress into a Renaissance-style palace. But by the 1600s, tastes had changed and the Royal family decided to rebuild the palace in Baroque style. They didn’t get very far. The palace was completely destroyed by fire (along with the royal library, royal archives and the family’s prized possessions) on May 7, 1697. The blaze was first discovered by the castle’s keeper instead of the fire marshall and fire watchmen (who were running errands)… and by this point, it was too late. 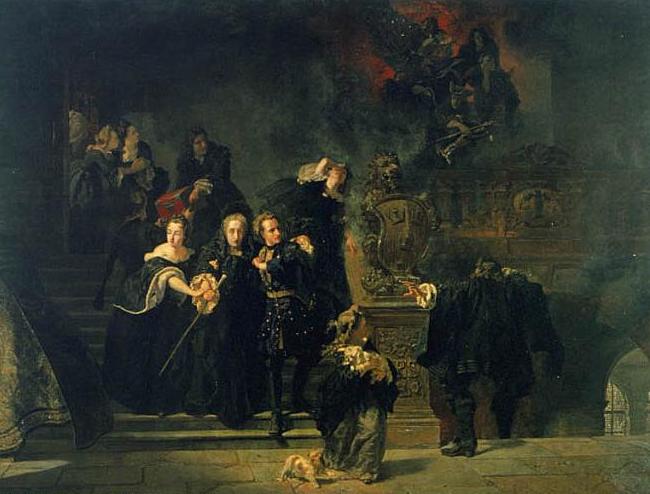 Johan Fredrik Höckerts painting Slottsbranden i Stockholm den 7 maj 1697 above is a depiction of the family fleeing the castle with the body of Charles XI of Sweden (who passed away a month earlier) and the crown jewels. This is the same Charles that Kungsholmen is named after.

After the fire, the castle was rebuilt into what you see and can tour today.

During my tour of Stockholm, the guide explained to us that the King and Queen don’t reside in the Royal Palace… but rather at Drottningholm Palace; however, when the flag flies over the Stockholm Palace, it means that the King is in Sweden.

0 comments on “The Stockholm Royal Palace”Add yours →