I thought I’d run a comparison of the two waterpark hotels in Calgary’s NE (by the airport). Both are popular destinations for waterslide parties, which is our preferred type of birthday party (you can burn off energy in the waterpark and at checkout walk out and not have to worry about clean up). We’ve held kids birthday parties at both hotels listed below… they are within walking distance of each other and (I would assume) competition with each other for business.

Of the two, our preferred hotel is the Port O’Call. There’s nothing influencing this choice other than our experiences. As an extreme traveller, I’m not a frequent customer of either hotel brand… only Marriott (I’ve achieved lifetime Platinum status with Marriott). But the Marriott in Calgary does not have waterslides so it’s not a kid party destination.

The rooms here were allegedly renovated in 2012. However, during our 2013 8-year old birthday party our room was not very impressive; it was dirty, dark, dingy, and noisy. However, the worst thing about this room was its location under the hotel’s neon signs, which made it impossible to achieve darkness at sleep time. As a result, none of the kids at the party slept well because the lights kept flashing and making sizzling noises.

The Oasis Waterpark itself is huge… open from 9am-10pm for hotel guests only (the hours changed recently; during our stay in 2013, the waterpark was only open until 9pm). We almost missed the experience because of frequently scheduled “facility refreshes” that shut down the slides and pool; it’s best to call ahead of time to make sure the facility is available, which we did (and had to reschedule).

Like the rooms, the facility has a dark and dingy feel to it at night. During the day it’s much brighter because of large windows. Giant puddles on the deck make walking around rather unpleasant.

The one thing that surprised me was that given the large number of parties held at the hotel, the hotel wasn’t particularly family-friendly. For a birthday party with five girls (in bed by 11pm) we had the manager talk to us twice about the noise the girls were making at 7pm and again at 9pm as we headed back to the room after the pool closed.

The cost of a family room: $266. Parking is outdoor, limited, and difficult to find.

Down the street from the Sheraton Cavalier is the Best Western Port O’Call Hotel. The hotel and Waves Waterpark are newly renovated and modernized… and the pool opens from 8:30am-10:30pm and free to use for hotel guests. We loved the 10:30 closing time because it kept the girls up late and made them tired at bedtime.

Birthday parties can use the facility and party rooms and not require a hotel stay. However, for a small group, it’s more cost-effective to rent a room for the evening and order in some food. Also, there are rooms that open up into the pool area, which are perfect for a waterslide birthday party.

My only complaint about this facility: there’s a real lack of seating in the pool area. There are plenty of upright deck chairs but very few tables. The majority of people who come to the facilities are families who need more space than the average upright deck chair.

Total cost for a room: $150 for a double; $170 for a poolside double. I’d recommend the poolside room on the ground floor for parties.

KID RATING OF THE TWO HOTELS

The girls had a slightly different perspective of the experience but the overall opinion/rating was the same.

2015: The girls rated the Port O’Call 5 out of 5. We rented a poolside cabana for La Niña’s birthday party and this was the perfect set-up. We set-up food on the patio and when the girls wanted to eat or drink they came over and had a bite. There is a “hidden” hot tub behind the slides that is really easy to access from the cabana rooms. The cabana room rated a 5/5 (for the party; not sure if I’d want to stay in the room more than 1 night). 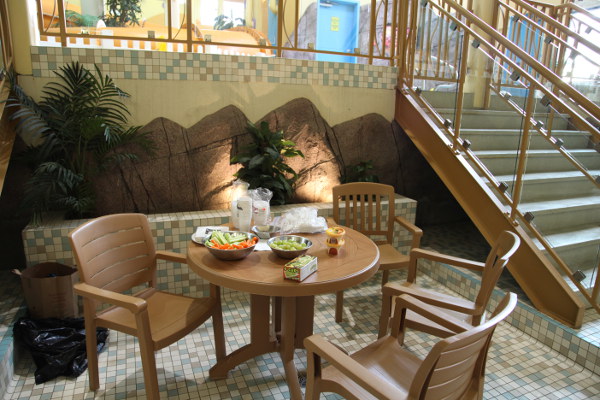 2013: They rated the Sheraton Cavalier as 3 out 5. The reason: This hotel had a steam room and the slides were longer. But the room was dirty and not nice; the staff were also mean.