I’m reposting this article from the St. John’s Telegram about my grandmother for my cousin Natasha. There’s more of the story on my old site in a post that I wrote when Eileen died.

BY J.M. Sullivan, Special to The Telegram.
Reprinted with permission from the editor of the Discovery section of the St. John’s Telegram – Sunday, March 25, 2001.

When a family in Nova Scotia found wartime negatives in a used sofa, featuring a stunning young woman and a handsome soldier in St. John’s, they just had to find out more about the people in the pictures. 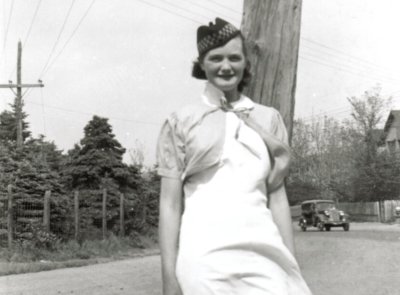 Photo after photo shows the same alluring young woman. In the summer, she’s leaning back against the grass in a field. In the winter she’s posed by a car. Whatever the season, she is stylishly dressed – from her hats (fur, or a summer one trimmed with cherries) to her footwear (ankle boots or heels with T-straps). Often, at her side, is a handsome young soldier. The details of his uniform, her dresses, and the design of the car; suggest the pictures date from the Second World War in St. John’s.

These beguiling images were found by Derek and Sarah Pelley when they developed some old negatives their son happened to come across. They became curious. Who was the woman? What was the occasion of the photos? And how had 60-year old negatives of photos taken in St. John end up in Nova Scotia?

About 10 years ago, a friend of the Pelley’s gave their son, Jude an old sofa. “Some time later, Jude and his friends found these negatives stuffed in the couch. He brought them to us. We looked at the first one, and could see it was of the caribou statue in Bowring Park. Other than that, we might have dismissed them, but that piqued our interest. We sat on them until this past year when we had contact sheets made.”

From the start, what most engaged them about the pictures was the young woman. “There was an aura about her that reaches out from the photographs. Something grew on us so we couldn’t help but wonder who she was,” said Derek Pelley. “I have to say, after we got the contact sheet. I just absolutely fell in love with the woman in the photographs,” Sarah Pelley added. 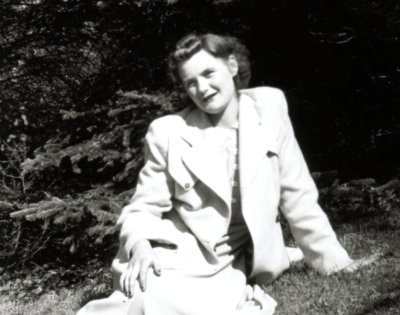 “With the negatives was a seemingly unrelated handwritten receipt, dated 1934, from a store close to here,” Derek Pelley said. “I should have pursued that from the beginning, but I didn’t.” Instead, he sent them to a friend in St. John’s, where they were shown to two archivists, Helen Miller, with the City of St. John’s, and Gail Weir with the Centre for Newfoundland Studies at Memorial University. Both made some good guesses as to when and where they were taken.

Miller knew the soldiers were wearing Canadian uniforms, and speculated that the young man who most frequently appeared could have been stationed on Bell Island. She also pinpointed one location as Cape Spear. “It’s very rare to see a wartime photo from Cape Spear, because (photos showing military installations) were censored,” Miller said. 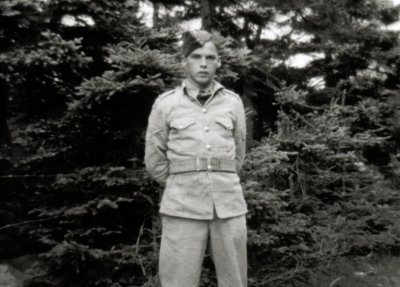 Weir thought some of the photos might show a militia camp. During the war, young men from all over Newfoundland spent six or eight weeks living in tents in one camp on Bell Island. Solving the mystery was difficult, because none of the photos had much of the geographical distinction in the background, and none contained telltale clues, such as a sign, car license plate or other revealing objects. 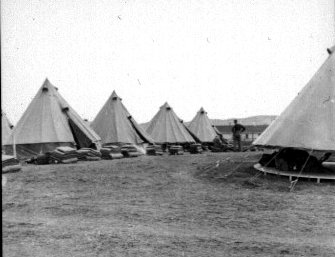 The Pelley’s friend sent back the pictures, and Derek Pelley decided to follow the trail of the handwritten receipt. “It was from Mill Village, a place near here, so I went there and snooped around. In another coincidence, I went into a garage and was talking to a mechanic and a guy was there at the same time, and he looked at the photos and said, (of one soldier who appeared in a group shot): “That’s my brother.” 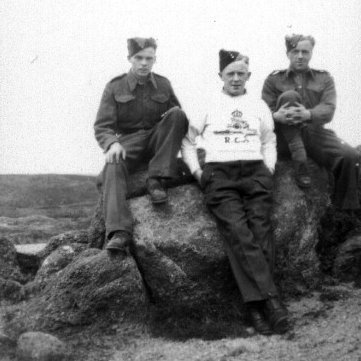 Then the Pelley’s learned that the soldier who appeared most often was a Nova Scotian named Max McKinnon, the man’s brother. The young woman was Eileen Hayes of Blackmarsh Road in St. John’s. It was late June 1942, she was 15, and the two were about to get married. With the help of Max McKinnon’s serendipitously encountered brother, the Pelleys also discovered that Eileen Hayes, now Mrs. McKinnon, still lived in Nova Scotia. (Max McKinnon died three years ago.) They contacted Mrs. McKinnon, and on a recent Sunday afternoon, they met her and members of her extended family.

They gave her the photographs, which they’d had developed. She had never seen them. When Derek put them in her lap, she said, “Oh, my God,” and then she said, “Where did you get these?” Sarah Pelley recalled. “She remembered every person in them, and knew where they were taken.” (Many were taken around the military tent encampment on Blackmarsh Road, near where it intersects Campbell Avenue today). “It was remarkable. She said they were her ‘courting photographs.'” “I couldn’t get over it – all these years,” said Mrs. McKinnon, contacted recently at her son’s house in Lawrencetown, outside Dartmouth, N.S. “I was really surprised.” 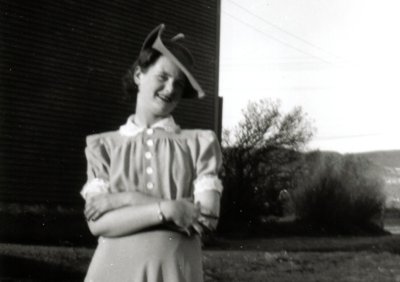 Max McKinnon had been serving with the Royal Canadian Artillery as part of the coastal defence at Cape Spear. Mrs. McKinnon said they had met on LeMarchant Road. “I was coming from the drugstore with my girlfriend,” she recalled. “He and some friends came up behind us and started tormenting us.” She was 14. They married a year later (she turned 16 on July 4, a few weeks after the wedding.) They had four children. One has died, and the others – Debbie, Bob and Kevin – live in Nova Scotia. After the war, Max McKinnon worked with weather departments in St. John’s, Gander and Nova Scotia.

Decades after they were taken, the photographs still have a crispness and depth. Their visual quality is amazing. “Obviously, it’s not your Brownie snapshots,” said Derek Pelley, “Eileen said Max went to the PX (on the American Base) and paid “$35 for a camera. For that amount in those days, it would have been a fairly good camera.” Bob McKinnon and his family maintain a Web site, and they have posted the photos online. 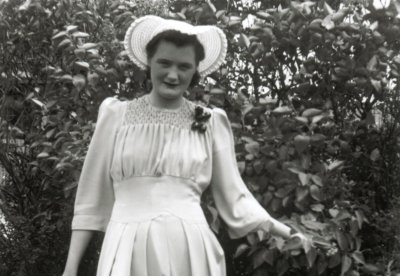 Mrs. McKinnon says she has no idea how the photographs ended up inside a third-hand sofa in Bridgewater. As to their future, she said, “I imagine I’ll give them to the kids. I’m getting old now, I’ll be 76.”

“She’s still recognizably the young woman in the photographs,” said Sarah Pelley. “She said, ‘I wish I still looked like that.’ But the aura is the same. Some of her grandchildren were there, big strapping young men, and one said, ‘Who’s the babe?'” 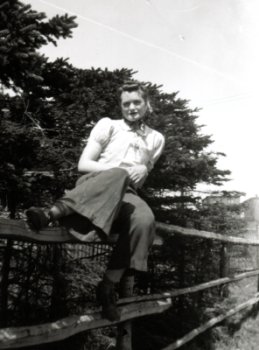 0 comments on “Woman of Mystery”Add yours →