The city of Bogotá has an incredibly rich and detailed history… starting long before the arrival of Europeans. It’s actually rather difficult to sift through the details written in Spanish to determine what to concentrate on. So, I’ve decided to focus on a particular area of the city: La Candelaria, the first neighbourhood of Bogotá.

Santa Fé de Bogotá was founded on August 6, 1538, in the New Kingdom of Granada by Gonzalo Jiménez de Quesada. He was in South America looking for El Dorado gold and other precious gems to bring back to the monarchy in Spain to fuel their war against France and other European nations.

The place of the city’s founding is thought to be at the Fountain of Quevedo in the Plazoleta del Chorro de Quevedo in La Candelaria. This tiny little square is full of life and culture and as you explore you’ll discover chicha and craft sellers, people mulling around, and those listening to storytellers who frequent the square. Storytelling is so popular that on some days it’s standing room only.

It’s from this plaza that the rest of the city was laid out and planned… and by city, I mean La Candelaria… though one of my taxi drivers showed me the “Spanish” section of Bogotá on my way to Monserrate; the “Spanish” part of the city that he showed me looked largely dirty, derelict, and neglected. It’s not too far away from what is La Candelaria and I suspect my driver showed me el Barrio Egipto, known for its crime and gang activity.

Around the Plazoleta del Chorro de Quevedo, the Spanish were ordered to build small huts and a straw church in which the first mass was performed by Fray Domingo de las Casas. From the square, tiny crooked cobblestone streets reach out like rays of sunshine. These are now occupied by pubs and small coffee shops frequented by students and tourists. A church that was built on the location of the first mass has long since disappeared; it was reportedly removed because it was too plain looking.

At the end of these rays are logical square blocks that can fit cars and larger vehicles. The businesses in Candelaria are a mishmash of museums, restaurants, churches, hostels, and theatres — all of which have an artistic and European flare. Some streets are shut down to allow pedestrian traffic to move freely without worrying about the danger of cars. 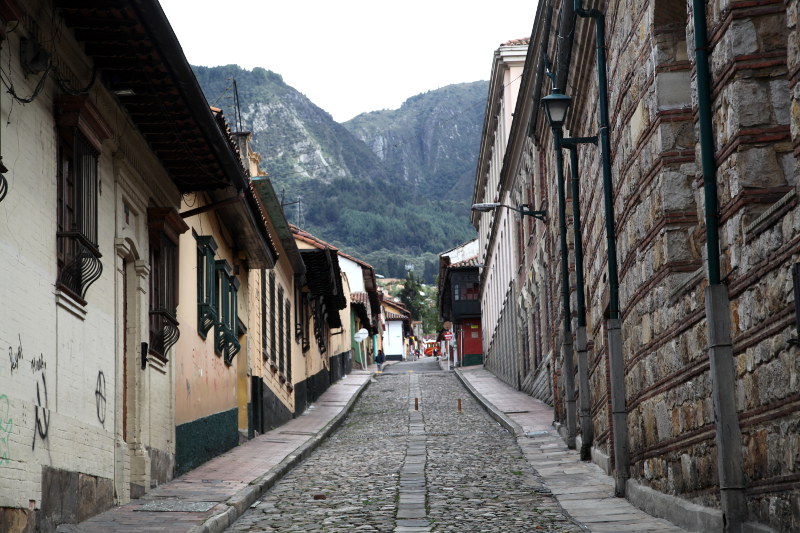 Even though I didn’t stay here, I spent the majority of my time in La Candelaria because it’s an area full of activity, people, culture, and history. There are no chain hotels that I saw (for those who use points for stays), but there are plenty of hostels and independent hotels from which to choose from. The Hotel de la Opera became my lifeline in La Candelaria and I popped in whenever I needed a taxi or directions. It’s recommended (for safety) that tourists call taxis from hotels rather than hail them on the street.