We’ve visited all of the historic Missions in California (not including the missing Missions in Mexico and those located on the Eastern side of the Colorado River). So, now the historic Adobes are creeping into the agenda. Adobe construction was first introduced to California by the Spanish (1769) and uses bricks made with a mixture of mud, manure, sand, and straw.

All the early settlers, farmers, and ranchers used this type of construction so to find/explore an adobe building means you are exploring a piece of California’s history. Most (if not all) of the remaining Adobe buildings have been marked as historical landmarks, preserved, and are open to the public for viewing. Some even contain authentic furniture and gardens.

The Adobe Catalina Verdugo was the first Adobe we visited. This is the oldest structure in the City of Glendale (1828 or 1860). The Adobe is named after María Catalina Verdugo, who was the blind and unmarried daughter of José María Verdugo, a soldier in the Spanish army. He came to California with the Rivera Expedition (1769), which travelled through California ahead of Junípero Serra.

After Verdugo completed his service with the Spanish he requested a land grant and was given 36,402 acres between Pasadena and the Mission San Fernando. When José María passed away, this land was given to his daughter Catalina and son Julio Antonio. Catalina lived in the adobe house on this land with her nephew Teodoro.

Also, on the site are the remains of the “Oak of Peace,” the tree under which Jesus Pico (cousin of General Pico and prisoner/envoy of John C. Frémont) met with Mexican Governor Andrés Pico to negotiate the terms of the Treaty of Cahuenga, which ended the fighting of the Mexican-American War. 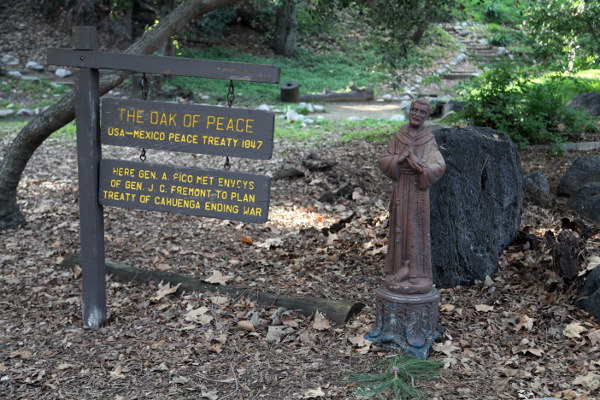 The official document was signed by Pico and Frémont on January 13, 1847, in what is now North Hollywood.

0 comments on “Adobe Catalina Verdugo”Add yours →