A life is like a garden. Perfect moments can be had, but not preserved, except in memory. LLAP – Leonard Nimoy

There are a few deaths of people who have stars on the Boulevard that I’ve seen that make me feel deeply sad about the circumstance of their life/death. The few that I’ve thought about are Michael Jackson and Robin Williams, both people who I believe saw the world in a way that impacted their ability to find the resilience needed to fully enjoy life.

Leonard Nimoy is the opposite of this. I feel like he’s a person who saw life as it was, struggled for a while, found his way out of the struggles, and embraced the world to find his place in it; he lived a long and hugely impactful life. He lived as a human should live, reflected frequently, learned, and evolved as a person should. As such, he was a great mentor as well as writer, artist, actor, photographer, musician, director, and overall personality.

We’ve stumbled upon little mementoes of this impact in our travels, here are a few that we’ve discovered along the way.

A 25th Star Trek Anniversary plaque found on Hollywood Boulevard at the entrance to the Chinese Theatre. 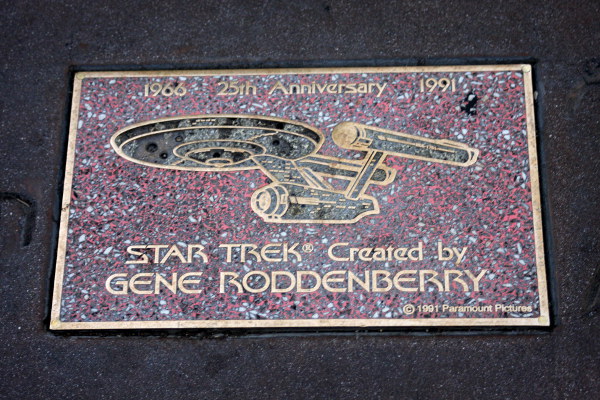 Around the plaque are the handprints and signatures of most of the cast of the original Star Trek TV show. The plaque and handprints were added to the theatre on December 5, 1991, and have since seen a lot of devoted fans. 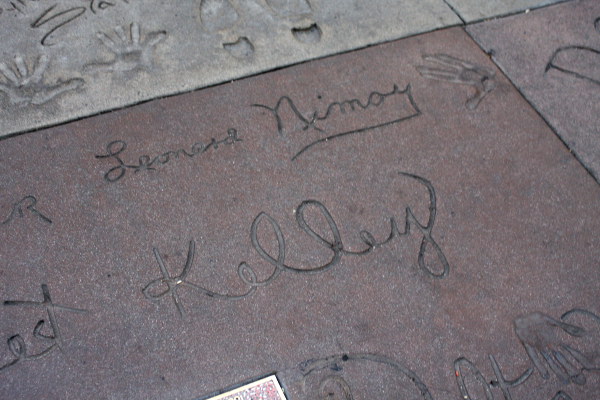 Nimoy’s star on the Walk of Fame; he was inducted on January 16, 1985. His star is located in a place that sees a HUGE amount of people so it always seemed a bit run down to me. Most members of the original series have stars on the walk with the most recent addition being Walter Koenig (September 10, 2012), during which the cast showed up to celebrate. 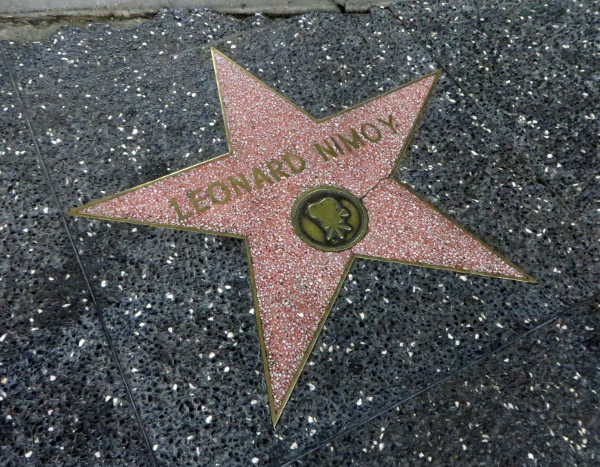 When a person who has a star on the Boulevard dies, the Hollywood Chamber lays a wreath on their star in memory. If the star is big enough, a shrine builds up around the star and becomes a de facto memorial. When Robin Williams died, it seemingly caused more fervour and craziness on the Boulevard than a premiere.

I wasn’t sure how they’d be able to put out a wreath by Nimoy’s star because the area gets so congested with people, but the Hollywood Chamber managed it. However, when the wreath arrived, Nimoy’s name was spelled wrong. 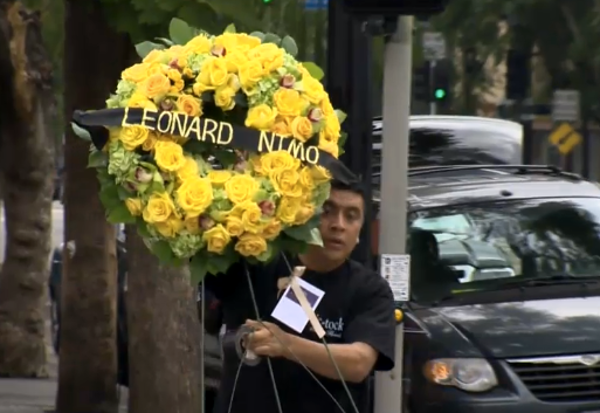 To their credit, as the wreath was put down, the coordinator removed the banner immediately and sent it back to the printer… so the mistake was only there briefly, and the wreath stood for a while without a banner. This didn’t stop people from pausing to take pictures and leave flowers, photos, and other mementoes in devotion to Leonard. 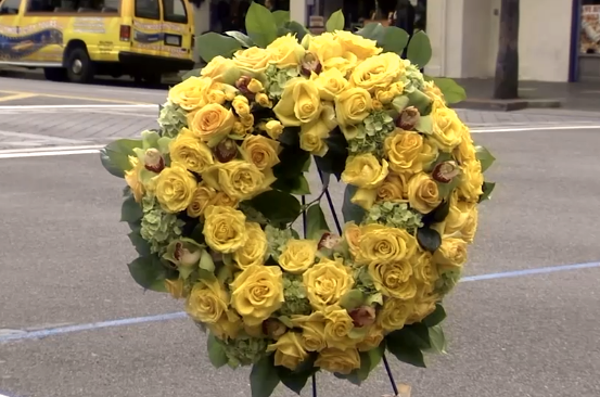 When the banner returned it was added to the wreath. 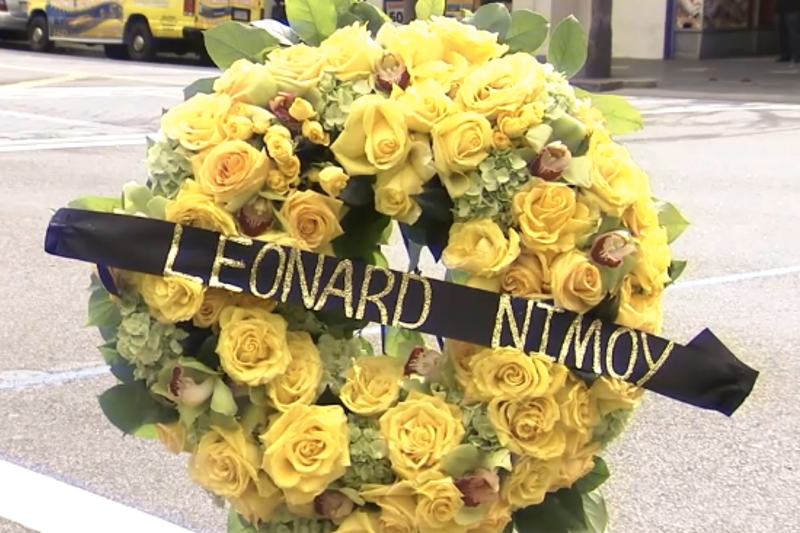 In 2010, we were scheduled to meet Nimoy during the Calgary Comic and Entertainment Expo, but La Niña contracted a vicious stomach flu and we had to stay home. At this point, Nimoy seemed to me to be one of those people who would live forever and that I’d see him at a later date. He really loved Alberta and in particular, had an affinity to a little place outside of the city named Vulcan.

In Vulcan, the town have built a small version of the original Enterprise. Behind this is a museum that commemorates and gathers items related to the Star Trek series. I can only imagine that in Vulcan this weekend, there are lots of people gathering to remember Nimoy and his role as Spock. He frequently visited the little museum and even donated some of his personal Star Trek memorabilia to their displays.

We visited in 2010. His handprint is in bronze at the museum. 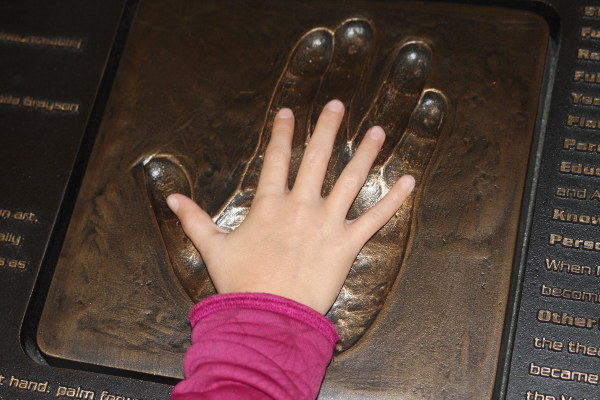 And, a bust of Nimoy in his role as Spock. Both the bust and handprint were unveiled in April 2010 with Nimoy in attendance. 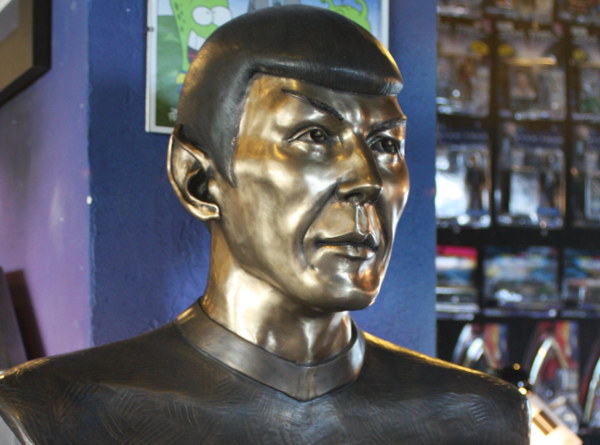 His two autobiographies, I Am Not Spock (1975) and I Am Spock (1995), are worth a read because they look at his journey with trying to find his identity while sharing it with his role as Spock. He is both Spock and Nimoy at the same time.

I’m sad at his passing but also feel that Nimoy lived his life to Spock’s parting phrase: Live Long and Prosper; Nimoy has done both. Rest in Peace.

0 comments on “Leonard Nimoy”Add yours →