Call it what you want: the Lamb of God, the Ghent Altarpiece, Het Lam Gods, or the Adoration of the Mystic Lamb; but, what it is is one of the world’s most significant paintings… that no one knows about.

This 12-panelled work is thought to have been commissioned by Joos Vijdand and then conceived by Hubert van Eyck in the early 1400s, but van Eyck died in 1426 before he could actually paint it.

As such, it was completed by his younger brother Jan van Eyck in 1432. This date is significant because the painting is considered to be one of the first to use oils and artistic realism, which are both characteristics of Renaissance Art. All great painters/paintings that we associate with the Renaissance (Leonardo da Vinci, Michelangelo, Giovanni Bellini, Botticelli) came later. 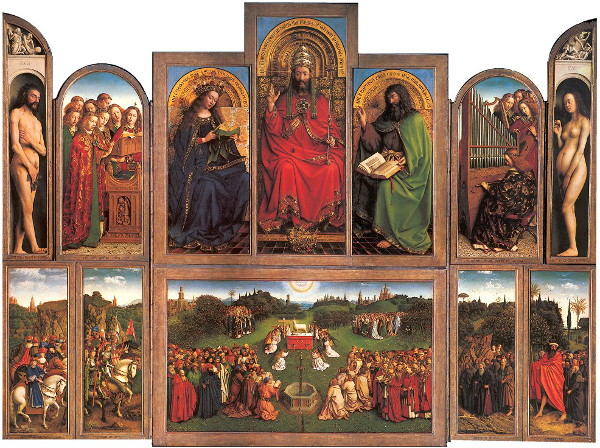 It also happens to be one of a few pieces of art to survive from the Middle Ages (in Europe). Most other paintings, altarpieces, and images were destroyed during the period of let’s-destroy-all-religious-images-for-no-valid-reason (yep… Calvinist Iconoclasm) that swept through Europe in the 1500s.

Because of its age and importance to the Renaissance, it has long been desired by political leaders, art collectors, and thieves. It is considered one of the most “stolen” pieces of art in history.

Napoleon took the painting during his occupation of Ghent (after turning the city’s churches into horse stables for his men) but it was later returned to Belgium by Louis XVIII, after his accession to the throne in 1814.

Hitler wanted it for his planned Führermuseum and sent Kunstschutz agents to seize the altarpiece; he was also convinced that the painting had a secret treasure map that showed the location of the relics of Christ’s passion. The painting he stole was missing one panel, the Just Judges (bottom left), which was stolen from the church in 1934. Thieves probably wanted the entire painting but were unable to move it because it weighs over a ton.

Hitler and his Kunstschutz agents hid the rest of the painting away in an Austrian salt mine to protect it from bombers. It was later recovered by the MFAA (Monuments Men) and found to have been damaged by the salt in the mines. The painting was restored and a copy of the missing panel was painted in 1939-40 by restoration artist Jef Van der Veken. The Just Judges is listed as one of the most looked for pieces of art today.

The “Lamb” referred to in the name is in the lower centre panel and is standing on an altar surrounded by a circle of angels holding symbols of Christ’s passion (the crown of thorns, the crucifix). Blood flows from the lamb’s breast and is collected in a chalice. It shows no emotion but looks rather peaceful. On the altar, in Latin, it says Behold the Lamb of God who takes away the sins of the world. The lamb is an obvious reference to Jesus who died to take away the sins of man. 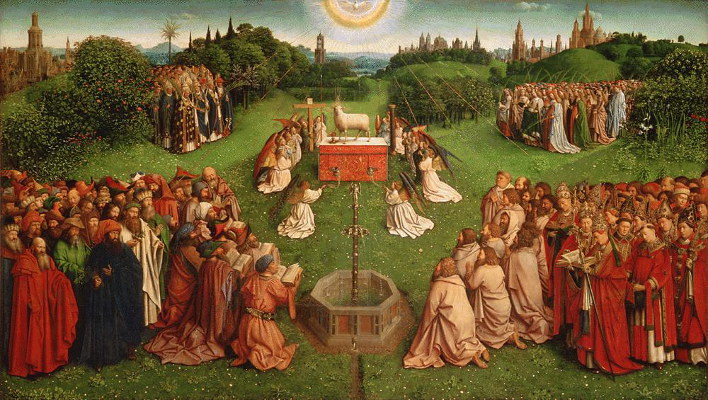 The top panels include Adam and Eve (in the corners), the Virgin Mary, the Lord, and John the Baptist (in the top central Deësis), and the Singing Angels and Music-making Angels on either side of the Deësis.

The bottom panels show people arriving to see the Lamb. On the left are the Just Judges and the Warriors of Christ. On the right are the Holy Hermits and Pilgrims.

The panels close to show lunettes of prophets and angels looking down on an annunciation scene (on the top). 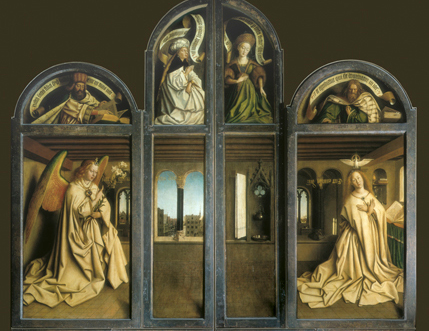 In the annunciation, scene saints are looking towards to two brightly coloured paintings of people. These represent the couple who commissioned the work (the donors), Joost Vijdt and his wife Lysbette Borluut. 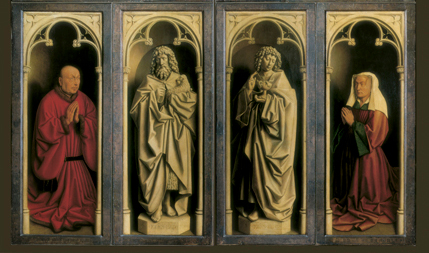 The most fascinating part of the piece (to me) is not the lamb, but rather the life-sized nudes of Adam and Eve in the upper corners; they try to cover their naked state and look either ashamed at their nakedness or dismayed at what is happening below.

Both were so realistically painted that it’s said that Joseph II visited the church and demanded that the altarpiece be removed. They were especially upset by the naked pear shaped Eve painted in Early Netherlandish Renaissance naturalism (what Hubert and Jan Van Eyck were known for). Because of this, for many years the painting was hidden and then censored by replacing the Van Eyck upper panels with a bearskin covered Adam and Eve. 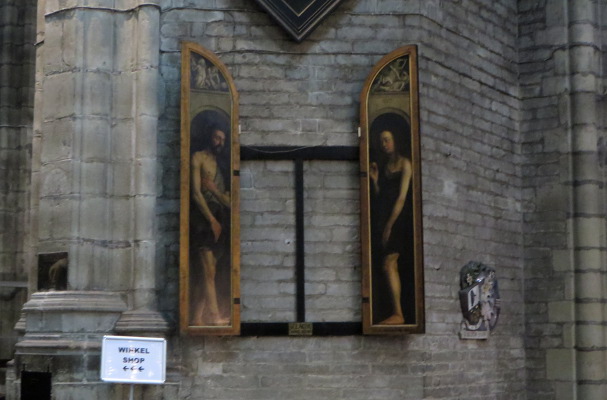 I have never in my life sat and listened to an hour-long diatribe about a painting; I love art but I’m not that committed to sit and learn about brush strokes, colours, textures, and hidden meanings. I’m very much a social history person. But, this piece of work has such a fascinating history that I couldn’t help myself. And, La Niña stuck around too… and we even discussed at length after our visit. It’s an interesting painting and completely worth the €4 to visit.

(P.S. the statue outside the church (in the gallery) is of the Van Eyck brothers. It was unveiled by King Alber I during the 1913 World Exhibition.)

1 comment on “The Lamb of God in Ghent”Add yours →