I’m not sure what’s going on with the gf scene in Schaumburg. But, apparently, glutinos have browbeaten every restaurant into compliance. There were moments where I hadn’t completely asked the do you have a gf menu question and it was already being handed to me. Nowhere in the world have I ever experienced such a reception and I found it a tad bit frightening… like meeting a person who tries too hard to be your friend.

So, in my short little jaunt to this sleepy, construction riddled, box store haven, I found plenty of places to eat as a person who has severe reactions. Here are some gluten-friendly menus that I explored (and I didn’t have to resort to sushi). 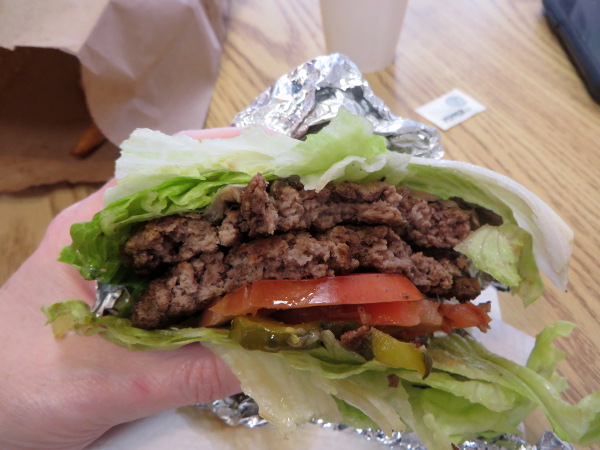 This place has some serious marketing fu going on; and, its gf compliance has been broadcast to the world in big bold letters. Yep, you can get a hamburger wrapped in lettuce. Yep, the patties are homemade without cheap fillers like flour. Yep, the french fries are house cut and not breaded. However… go past the surface to things like condiments, drinks, and toppings and you need to tread carefully.

Also, every buzz word in the book is used in the menu from trans-fat free to locally sourced to family friendly to the food is handmade in the back by politically-correct-people-being-paid-an-above-average-wage. But, all food comes with enough salt to give you a headache. Also, if you have a peanut allergy, avoid this place like the plague. There are peanut shells EVERYWHERE. In fact, the restaurant smells like peanuts so don’t even walk by. 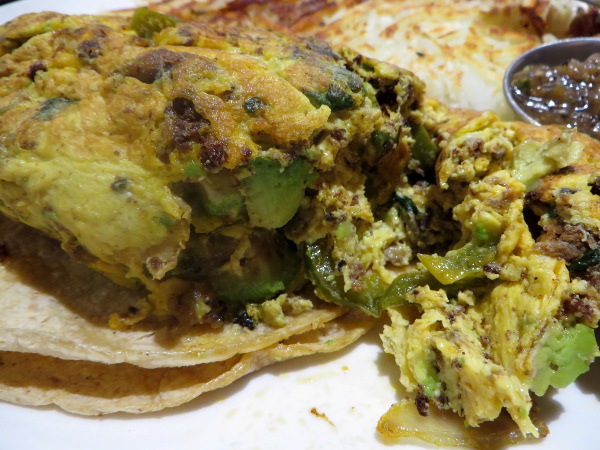 When I first walked into Wildberries, I immediately thought “cheap American diner” and almost walked out (because cheap American diners throw pancake batter into their eggs). However, the reviews on Yelp helped me stay-put and I’m glad that I did. The food here is not only gluten safe but also pretty fantastic too. My first sip of a soy cappuccino was shockingly good and a reprieve from being in a place where Starbucks is considered top-notch.

My visit here was on Cinco de Mayo, so I chose the Espanola to celebrate. The omelette comes with fruit, hash browns, and gf pancakes. All of this could have easily fed two people, but because there was only one of me, I made two meals out of it. Not all condiments are house-made, but the ones that are trump anything that comes out of a jar/can/bottle.

I must have walked by this place a handful of times on my way to other restaurants because it’s a deli… and delicatessens make sandwiches… and I can’t eat sandwiches. As it turns out, the gf browbeating has hit the sandwich shops too and this is the place to go for sandwiches, quinoa, and spicy seafood gumbo. I kid you not! 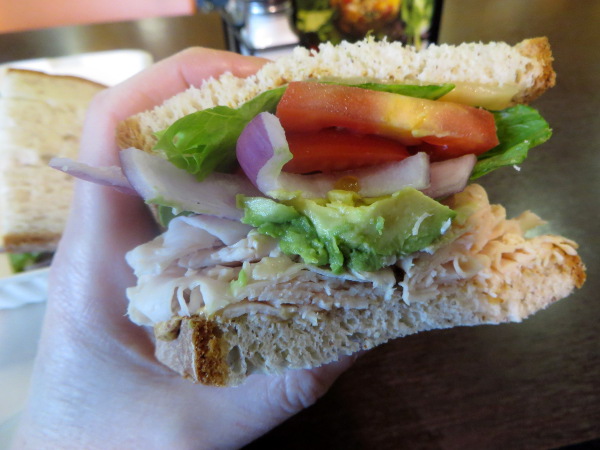 I’ll admit I’m going a little crazy with the man meals on this trip. But, I spend most of my time eating quinoa and sushi because that’s all that’s usually available in the gluten-free format. So, at Jason’s, I skipped the quinoa and went right for the Udi’s bread. In hindsight, I wish I’d eaten the seafood gumbo.

One final note: all things gf that come out of the kitchen come with the cute little legal disclaimer below. I especially love the use of “minor gluten sensitivities,” as if people will categorize themselves as such. 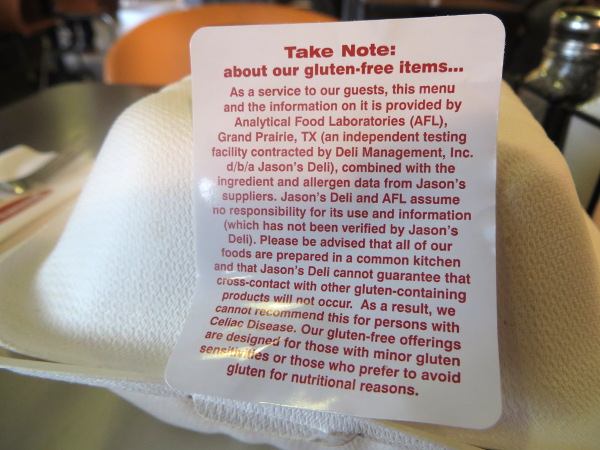 Chipotle recently received a lot of criticism for its decision to remove GMO products from its ingredients list and focus on foods that are locally sourced, gluten-free, and use animals raised sustainably without the use of antibiotics. They’ve been called out for fear-mongering, using bad science, and making poor food choices.

Personally, I don’t understand how a focus on improved quality of the food on their menu and making food producers accountable for the food they supply can be considered making poor choices. People are sometimes really silly.

Either way, for the first time ever in years, I was actually able to attend a corporate lunch because it was catered by Chipotle (and not leave to find my own food or not eat at all). This in my mind makes them top-notch. And honestly, not one person out of the 40-50 people who ate even noticed that the food was gluten-free… and everyone I talked to said it tasted fantastic. 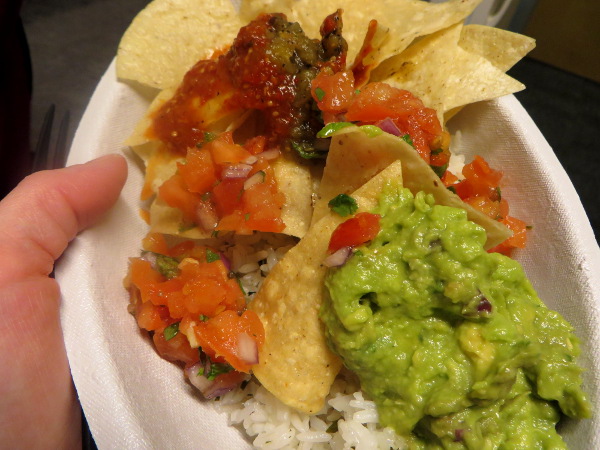 Finally, I mentioned above that in Schaumburg, Starbucks is considered top-notch. The Starbucks in Schaumburg does have one thing working in its favour: the elusive and rare Clover machine that everyone talks about. Few Starbucks cafes have it… and those that do are packed with people.

I was told by one person that the coffee that comes out of a Clover is like drinking a rainbow. Another said I will never be able to drink normal coffee again. So, I went out in search of this unicorn to see for myself if it’d truly live up to the hype. 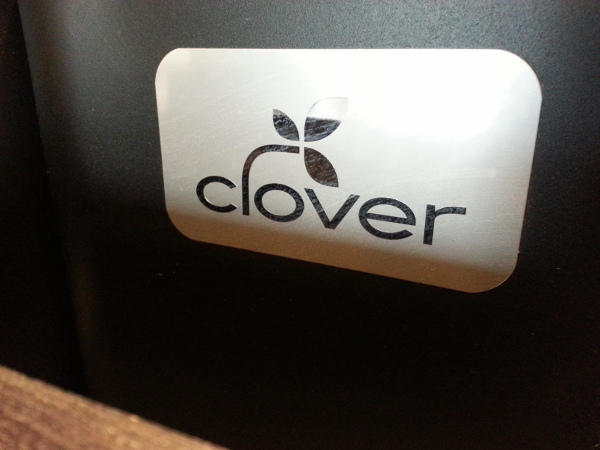 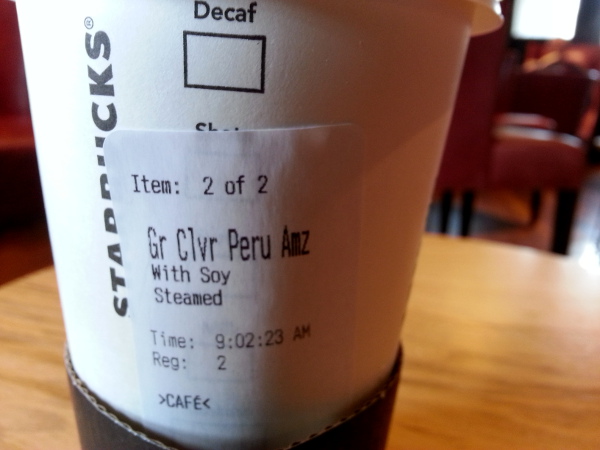 My opinion? The coffee that came out of this thing was pretty fantastic. And, it got better as I nursed it throughout the day. The Clover thing is a game-changer for Starbucks.

0 comments on “Gluten Free in Schaumburg”Add yours →