At the end of the third week of the chicken pox/flu debacle (which I am now calling it — minus swear words), I boarded a flight from Calgary to Toronto that was oversold by at least 20-people.

Anyone who travels a lot knows that this means many angry/confused people at the gate distracting the gate agents, people pushing and shoving to get onto the plane, disorganized boarding, not enough space in the overhead bins for bags/coats/canes/guitars/wedding dresses/items in long tubes, people trying to figure out what to do with their “stuff” (plus being cranky with each other), and a late departure.

This coupled with a de-icing that always seems to take forever, I arrived in Toronto at 2am in the morning… cranky and not feeling well and asking the question: Am I sick now? Is this cough the beginning of sickness? Am I not hungry because I am now getting the plague that has struck everyone else I know down?

After a very vigorous drive through Toronto in the middle of the night (by a cab driver who got an extra-large tip for the speed in which he got me to the hotel), I arrived at the Renaissance only to discover that their computer systems were down. We’ve been sending everyone to the Renaissance on the other side of downtown, I was told. This is when I put on the I’m not getting into another cab at 2:30am look. I’ll happily sleep on the couch in the lobby.

I said nothing. I’ve learned to say nothing and wait for whatever concession that airlines/hotels/rental car agencies have to offer.

They didn’t send me anywhere. They were suddenly able to pull a “Show Room” out of a hat. Without computer systems, the check-in ladies have no visibility into which rooms are occupied and which ones are not. But, a Show Room rarely gets booked in the non-event season and when it does it is a big deal. So, they knew for certain that at least one “Show Room” was empty.

I had no idea what “Show Room” meant, so I meandered to said room with the hotel manager because without computer systems they couldn’t tell if the room was clean, issue me a key, swipe my credit card, or even set-up the phone system. After a quick check, I was let into the room and locked in for the night.

Let me explain what a Show Room is and give you a tour of Room 164. There are five in the Renaissance. They are two-story suites with huge windows that look out onto the pitch of the Rogers Centre. Each one has a bar, kitchen, and lounge area from which you can watch ball games, concerts, or special events. The upstairs loft has a king bed, another view of the pitch (so you can lay in bed and watch a ball game!?), and a hot tub.

When you walk in there is an area for coats and boots. The flooring is hardwood… I assume because it is easier to clean after game days. The bar is tucked away under the stairs that go to the second level. 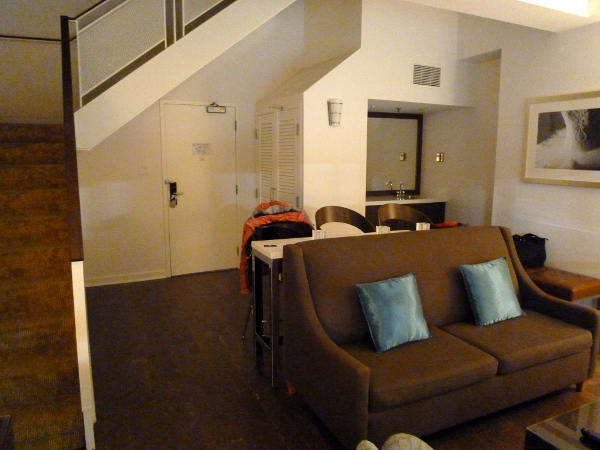 The first thing you notice when you enter is the view of the stadium. It’s vast and one of the room service guys told me that these rooms have the best seat/view in the entire hotel (there are also skyrooms down the hall… but these look more like party rooms than actual hotel rooms).

The lounge area can seat about a dozen bodies and a note on the door says “maximum occupancy is 15 people.” I know that during events, to access this floor you needed a special wrist band. These are shown to the security guard waiting outside the elevators. 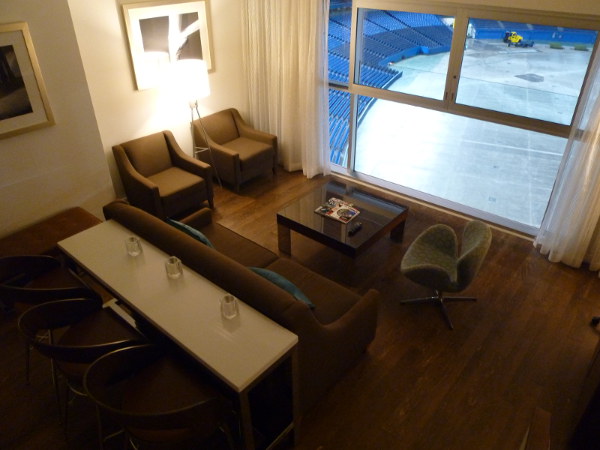 You can slide open the top window to hear/scream during a game, event, or concert. In my case, I opened it so that I could breathe stadium air and hear the workers below. For some reason I find the sound of cleaners scrubbing plastic chairs rather soothing. 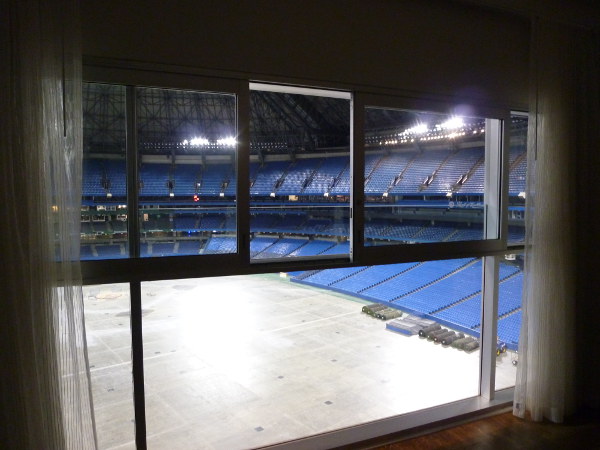 Even watching people roll up astroturf and drive around in little golf carts makes for great people watching. I couldn’t help but wonder if the stadium rolls in new astroturf periodically or if they send it out to the cleaners. At some point in December, the stadium turns into a skating rink and Disney on Ice takes over. 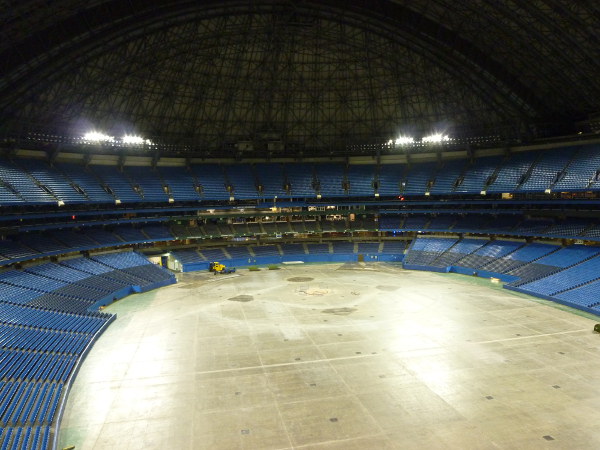 The stairs take you up to my messy bag and the loft with a king bed. The view of the stadium is decent though the light-blocking curtains don’t completely block light and if that sort of thing bugs you, you won’t get a good sleep. 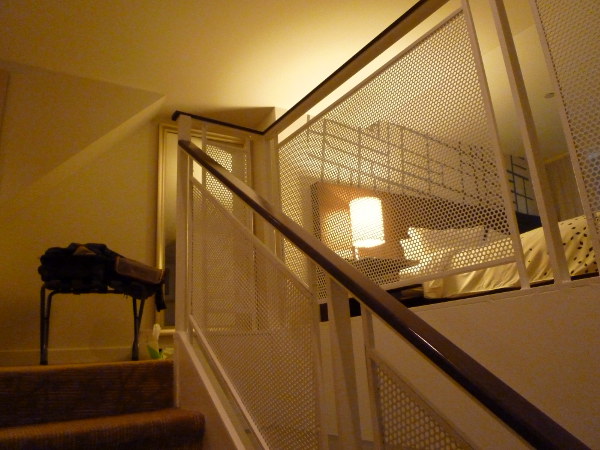 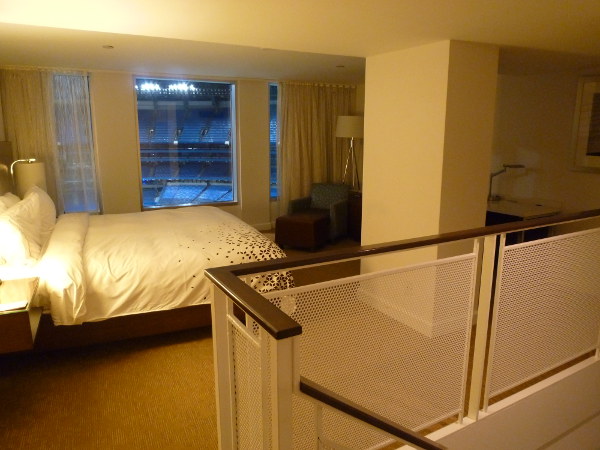 The bathroom is the nicest I have seen in this hotel. Showering in a hot tub is a tad bit weird and requires some level of dexterity to get in/out of the tub. It took me forever to figure out the knobby, pushy, pulley, twisty thing that controls the shower and faucet. The hot tub in this room doesn’t actually work. 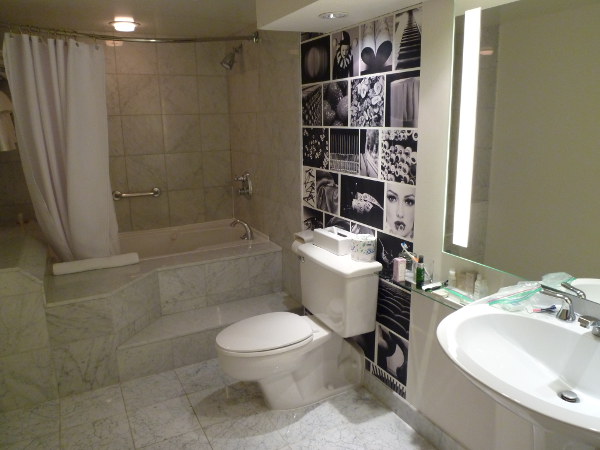 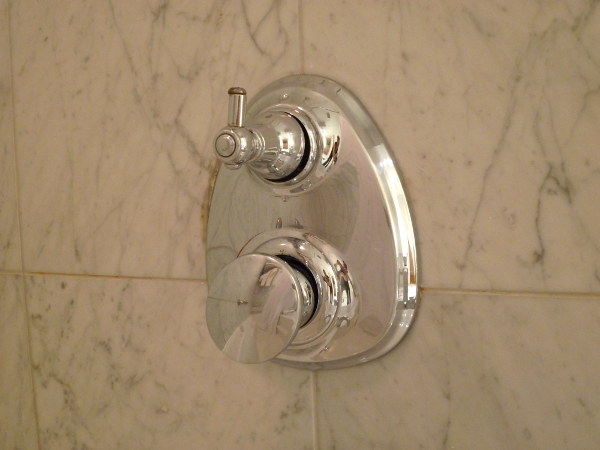 In all, not a bad room; I’m not sure the experience during a show/event (probably awesome)… you’d need advance knowledge of what is coming because these rooms are hard to book during events.