11:30 a.m. – The geeks rush the theatre. We have been forced to wait in the mall until the doors open.

11:31 a.m. – I arrive in the actual theatre. And there are no good seats because hundreds of people were faster than me. We (the Chrises and myself) are forced to sit in the lower half of the theatre – but near the top of the lower half and not the front row. I have fears about throwing up because my balance is vision based – and large action scenes make me nauseous.

12:00 p.m. – We leave the theatre to find a Royal Bank to deposit my paycheck so bad things don’t happen at midnight when my student load payments get taken out. The Royal Bank is moving away from having physical banks and moving towards e-banking. This really sucks for people like me who get a paper paycheck.

12:30 p.m. – The theatre staff announce that there are free refills for anyone who buys a large pop and popcorn. Great – 12 hours worth of movies and plenty of opportunities to fill your bladder. I learn later that I am in the row with the people who have the smallest bladders in the whole theatre.

12:45 p.m. – There is talk about ordering a pizza in – to be delivered to our row. We decide not to and eat really greasy pizza from the theatre – then regret it later. 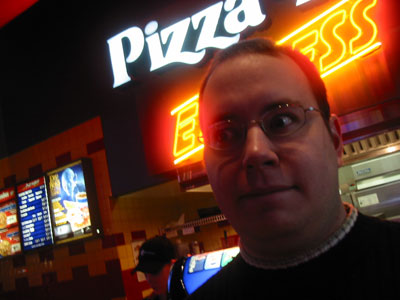 1:00 p.m. – I discover that the show is a huge networking opportunity. To my right is a software programmer; to my left database programmers/designers (the Chrises) and at the end of the row, network specialists; behind me are flash developers and designers; and in front are web developers in training. In the front row is William, behind him is the Linux user group and a guy decked out in real chain mail. 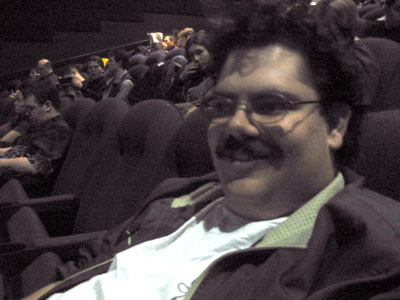 1:30 p.m. – The Extended version of Fellowship of the Ring begins and there is mass cheering in the crowd. I actually get goose pimples. A lot of the glee has to do with the fact that:

4:45 p.m. – The first movie ends and we are asked to stay in our seats until we get our “special gift.” It is a plaque containing one film cell from each LOTR movie. Mine contains a scene with Boromir – a scene with Frodo and Sam – and a scene with Gandalf. We are asked to produce the “one ticket” which we need to have on us at all times. Without it, we wouldn’t have access to the theatre. 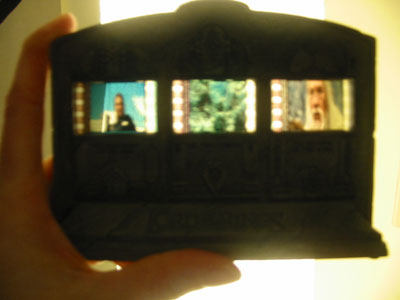 4:55 p.m. – I do my first bathroom break – and the bathroom stinks – so much so that I have to fight to keep from gagging. After I wander around the theatre and talk to people. William has his Rubik’s Cube and is attracting attention because of it. He seems to be around all the people who are dressed up in period and character costumes.

5:45 p.m. – The Two Towers Begins. Again there is clapping and screaming. For this movie, I am armed with popcorn, a burger, and water. The guy sitting next to me has the smallest bladder in the world and keeps getting up to go to the bathroom, which is no surprise considering I watched him suck back a large pop in less than 20 seconds flat. Watching the extended edition on the big screen gave me a few “goosebump” moments. I learn that our DVD player chops the ends of scenes for this DVD.

9:20 p.m. – My knees ache like crazy. After the movie, I do some yoga stretches – but it is not helping. The Chrises go for coffee and get locked out of the theatre when the mall closes. William comes for a visit – we are both dazed and disoriented and he can barely stand up. The conversation is one of the geekiest I have ever had – probably because we are in the LOTR zone. When the Chrises get back I just have enough time to go to the bathroom and then grab a hot dog. 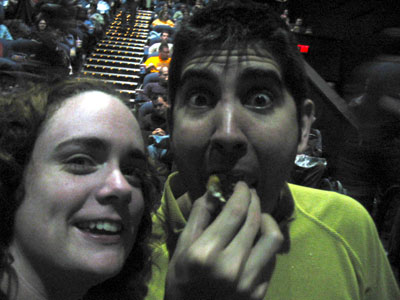 10:00 p.m. – The Return of the King begins and I realize I shouldn’t have eaten the hot dog. For the next hour, I have to put up with a tornado in my stomach.

The movie has no trailers. Again, everyone starts screaming, yelling and clapping. I have many weepy-eyed moments – especially at the end of the movie. I get sick of the Chrises talking about the “gay hobbit syndrome” but resist the urge to tell them to shut up.

At one point in the movie, the Witch King is confronted by Eowyn and he says: “No man can kill me.” She rips off her helmet and says “Eat metal motherf–ker…” and chops off his head…(Actually she rips off her helmet and says something to the effect of “I can kill you because I am a woman” and then sticks her blade into the empty void where his face should be and he dies. I just happen to like my version better.) At this point, everyone starts screaming and clapping – much like they did when Denethor set himself on fire and ran off the edge of the white tower. It was a climactic moment.

At the end of the movie, there is a standing ovation.

1:30 a.m. – Everyone leaves the theatre dazed and emotionally exhausted. I am a little disappointed that the Faramir and Eowyn scenes were cut from the ROTK. The plot was missing pieces that will most likely appear in the extended edition of the movie (I’ve heard a rumour that an hour and a half of footage was cut from the screen version!).

7:30 a.m. – After 5 hours of hot dog tortured sleep I blindly walk around my apartment getting ready to go to work. My eyes are bloodshot and my knees and hips ache. I wear a bathing suit to work under my clothes because I can’t find any underwear. I hope no one will notice that my clothes are those that I wore last Friday.

7:45 a.m. – I force half a bagel down in an attempt to push out the food I ate last night out of my body. I check the blog sites of other people who were there [1, 2, 3, 4] to see what other attendees had to say. They posted lame posts like myself because the whole experience was really overwhelming and very much a journey. I doubt I will be able to process everything that happened.

9:15 a.m. – I get into a discussion about the Return of the King with a co-worker. Discussion continues until I go for lunch – after which my triple espresso coffee has worn off and I am too tired to talk to anyone.