When you move to Québec, you have 6-months to change your healthcare, driver’s licence, vehicle registration, and insurance.

What they fail to tell you is that there is a 3-month waiting list to get a government appointment and because of this you don’t necessarily have the choice on where to go for said appointment.

The Société de l’assurance automobile du Québec (SAAQ) is surely the inspiration for movies and TV shows that depict waiting area scenes as an incarnation of hell… like the DMV in The Blacklist or the Netherworld Waiting Room in Beetlejuice. Except, getting an appointment at the SAAQ in Montréal is like playing Russian Roulette and this time around I lost.

The quickest appointment I could get was in October (remember we moved here in June) and was in a facility on the other side of Montréal.

I did the hour-long drive early because I figured that finding a parking spot would be difficult. I was right. People drove around the parking lot like ants waiting for someone to vacate the building so they could follow that person to their spot.

Unfortunately, the SAAQ is like the Hotel California and people never actually leave the building. It took a while but I managed to get a spot. Ironically, I disobeyed all the ridiculous and illogical traffic signs and directional lanes to get it.

The facility is a French-only facility so I had absolutely no idea of what to do or who to talk to when I walked in. I had to ping dP who texted me French snippets of what to say. Luckily for him, he won the SAAQ lottery and was sent to a facility close to our house where people speak English and he was in and out in 20-minutes.

At my facility, there were security guards at the door channelling people into a human cattle waiting area (and keeping people away from wickets).

It was small, cramped, and in the middle was a bathroom… with all the chairs facing the bathroom door like people in a theatre watching a moving… maybe they clap when you come out.

In my opinion, you’d have to be completely desperate to use that washroom with everyone watching you go in and out; but, people do use it and bathroom stench leaks out into the overly stuffed waiting area every time the door opens.

Next, a security guard comes into the room and periodically calls out numbers in French. I do know numbers and was able to link dix vingt to my appointment time. Unfortunately, 50 other people had the same appointment time and all of us walked over to the next waiting area where you stand in a very long line. *I think* the purpose of this line up is to get a number.

After this, there is great confusion as you try to figure out which direction to go because there are three funnels that lead to different waiting areas. My ticket said J4 but there was no indication of what this means. So, it was like a puzzle game… like Riven or Myst, where you try to figure out the switches and patterns that lead you to the next level.

The magical combination led me to another waiting area where stunned people looked like they had been there for days. Everyone was watching a numbered board hopelessly as each number flickered periodically but never really moved. The numbers are random and exhibit no logical order so there’s no way of estimating how long you’d be waiting. 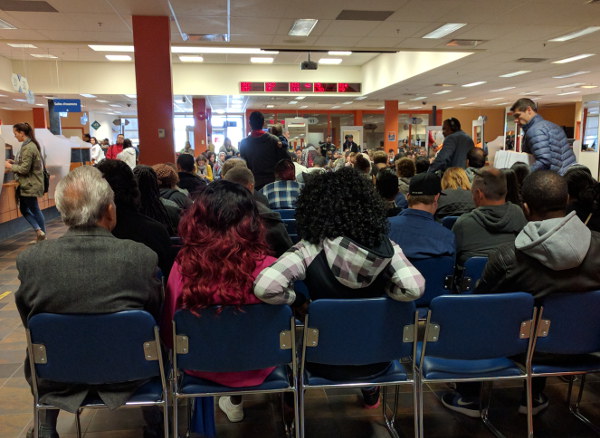 My queue was the J queue, which never ever actually appeared on the board. After hours and hours and hours of waiting with angry, passively helpless people who didn’t think to bring a back-up battery for their electronic devices, my name was called (Sheelum Meekeenum) after a flurry of rapid French and I was instructed to go to a wicket that didn’t exist.

It took a while to get the magical combination to work because there was no cheat sheet. But, I found the wicket!

Yay, I persevered and progressed to the next level of bureaucracy.

My conversation with an incredibly young SAAQ guy included lots of smiles, shoulder shrugging, me laying out all the pieces of paper I had, him shuffling them around to find what he needed, some sort of explanation about insurance that I didn’t understand, him asking me about my first Nova Scotia drivers licence (which dates to 1987), and me reading printed sheets that were prepared for people who speak English.

I signed a bunch of papers, my Alberta licence was taken away, and he disappeared for a very long time with all the documents needed for someone to steal my identity. After a while, I began to think that I needed to do another Riven/Myst logic puzzle to get him to come back. 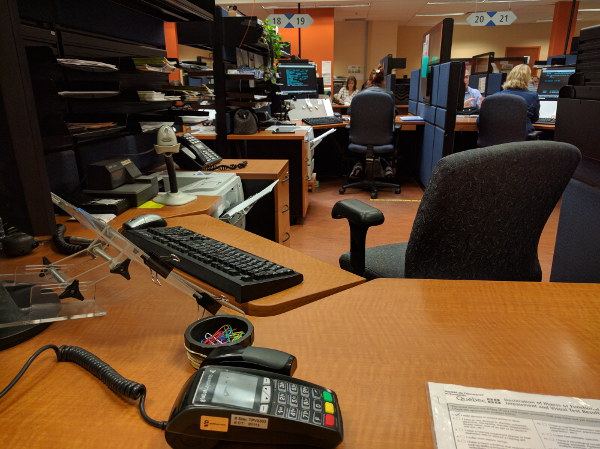 I imagine that the life of an SAAQ Agent must be pretty frustrating. The poor fellow in the wicket across from me didn’t speak English or French and the conversation included lots of hand gesturing, pointing, scribbling on paper, loud talking, exhales, and shoulder shrugging. The woman working handled it with grace.

To the relief of someone waiting for a parking spot, I made it out alive with a piece of paper that may or may not let me actually drive a car. This is one step ahead of our application for Québec health care, which was more confusing and difficult than building a particle accelerator. We may or may not have health care at the moment.

October 16, 2016 sharlene Anglo in Québec The Move to Montréal

0 comments on “Ahhh yes, the joys of Québec bureaucracy”Add yours →