There’s no reason for us to be in Rice Point except to explore and see the place where Jack McEachern is from. I’m still trying to understand the connection between him and the Mill Village boys. Why was he in Saskatchewan with them? Is a Saskatchewan land grant the only connection?

Jack’s branch of the McEachern family tree came to Prince Edward Island as a result of chain migration and a family connection to the Scottish and Irish settlers who arrived in P.E.I. at the end of the Napoleonic Wars and Industrial Revolution (1820).

Jack’s grandfather (Neill McEachern) arrived some time before the 1841 Census (likely 1830) from the Isle of Skye in Scotland. The family settled on Lot 65, along the delineation point between Rice Point and Nine Mile Creek (look for the red arrow below; all the yellow plots show where the McEachern families settled). 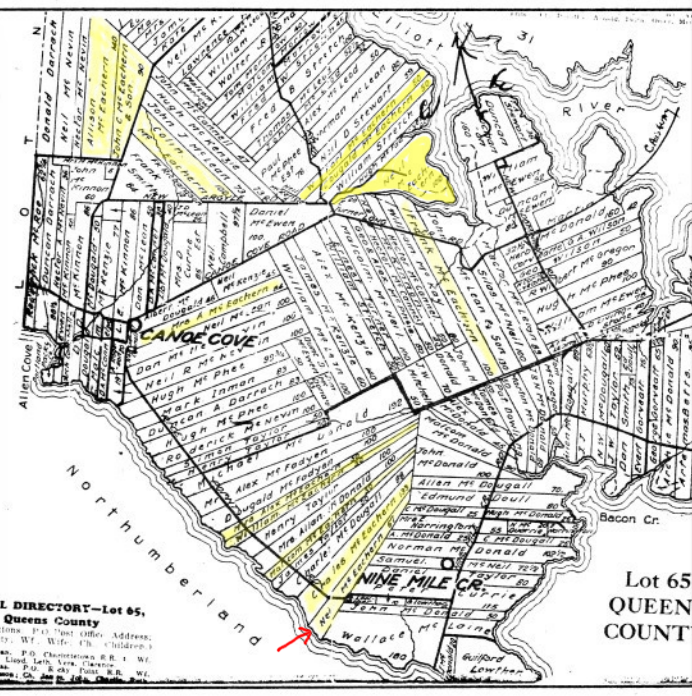 To put this into historical context, after the expulsion of Acadians, the land in P.E.I. was distributed to British nobility via the 1767 Land Lottery; Lot 65 was awarded to Richard Wright and Hugh Owens and they had 10-years to settle the land.

However, wars in Europe and the United States slowed down immigration to North America and by 1781, one half of Lot 65 was sold to the government as part of the Escheat Movement. By 1838, the land was owned by the heirs of General Edmund Fanning and George Wright.

In 1875, all tenant landholders were forcibly bought out by the newly formed Government of Canada. According to census and military records, the McEachern family were still in Rice Point after this period.

Rice Point is a beautiful part of the Maritimes. The land here is typical of Prince Edward Island: with green vegetation, red sands, fertile soil, and slowly disappearing into the ocean. Records from the 1840s show that the settlers in this area were fisherman and farmers; the farms produced primarily potatoes.

We found some clues (or breadcrumbs) for solving the mystery of how Jack knew the Mill Village boys in the Canoe Cove graveyard (or perhaps these were simply red herrings; it’s unknown at this point).

We never intended to visit but stopped to add GPS coordinates to my phone. While parked we quickly noticed that the names “McEachern” and “McKinnon” are on most of the headstones.

Could the connection be here? Neill McEachern married Catherine McKinnon (grandparents) of Queen’s County. His son Alexander married Ellen Hewitt (parents). My grandfather was always adamant that we were somehow connected to the Isle of Skye (we have disproved this theory).

0 comments on “A place called Rice Point”Add yours →