We arrived on Prince Edward Island during a storm… a rainstorm that caused low visibility and created massive puddles that washed out parts of the roads that we were driving on. It was much worse in areas where roads were not paved, which is a considerably large portion of the island. 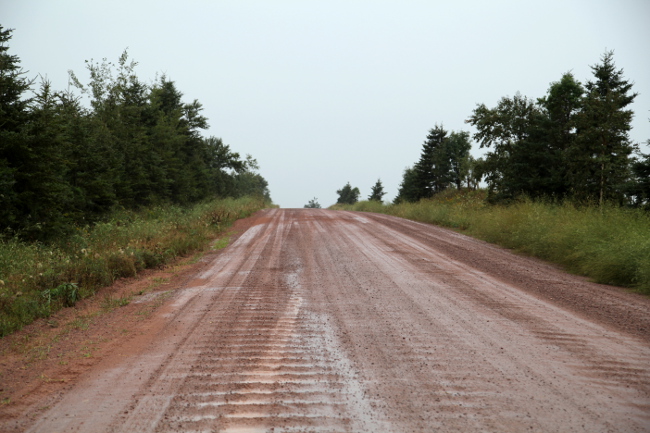 I suspect that this is why we met periodic waves of RVs, trailers, cars, and buses that were leaving the province very early in the morning. When the weather on the bridge becomes dangerous, it’s shut down.

The history of P.E.I. is interesting in its omissions. When we learned about the Island in high school history (N.S. school system, 1980s), I remember starting with the Mi’kmaq, continuing with the settlement of the island by the English, the periodic plagues of mice and locusts in the 1800s, Confederation, and Lucy Maud Montgomery. The island’s French history was glossed over. Even Wikipedia makes omissions in their précis of the island’s history and later gloss over a partial French history in the details below.

The Island is one of the first places discovered by the French when Cartier first arrived in North America in the 1500s. It was originally named Ile Saint-Jean and periodically housed both French and Basque fishermen, the French military, and eventually Acadian colonists both before and after the expulsion. At the time of Le Grand Dérangement, the Island had 5,000 French residents; not all left, some Acadian families hid and remained on the island, which was acknowledged by Captain Samuel Holland during his survey in 1764 and by Isaac Deschamps during the 1768 census. The community of Miscouche still contains a number of Francophone families.

Currently, the island reflects an English and Scottish heritage. There’s not much evidence of the Acadian settlers left; only place names give clues into the island’s early history (Gaspereaux, Montague, Belle River, Port La Joie, and my all-time favourite: Souris). Arguably, all-island history is now drowned out by Anne of Green Gables tourism.

0 comments on “Canada’s smallest province”Add yours →