The hotel I am staying in is called the Ranjit hotel. I think it is fairly new and it smells of fresh paint and the walls are very pink with little to no dirt. When I first arrived my impression was one of relief after being on the dirty train forever I walked into this hot pink room with a quilt on the bed and a cute little dresser; I felt like I had walked into Raggedy Ann’s room.

The staff are very keen. The porter is constantly knocking at my door asking if I want this or that. The downstairs bellboy insists I go to dinner at his house every evening. He keeps saying “there will be three British girls” or “three Canadian girls.” But I have yet to see any other girls. When I ask where they are he always says: “They will meet us there, they know the way.” He must be imagining things because I have yet to see any other travellers in Aurangabad or surrounding sights.

Rather than banter for a ride up to the caves in a car or rickshaw, I rented a bicycle in hopes of getting a little exercise. The cost is 3 rupees for a brand new bike, which is modelled after an old British bicycle from the 1940s. The first pedal power destination was the Bibi-Ka-Maqbara, which is also known as the Poor Man’s Taj Mahal, which is an unfair description because the Bibi-Ka-Maqbara is a reflection of the simpler architectural tastes of the later Mughals and not the lavish ones of earlier rulers. 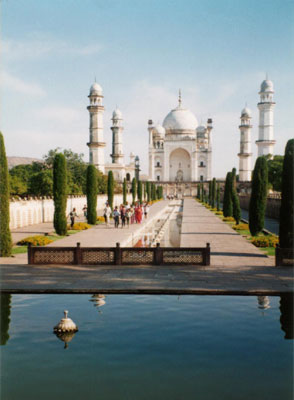 The Taj Mahal and the Bibi-Ka-Maqbara are linked through the Mughal family. The Mughals ruled between 1526-1707 and the last ruler of this line was Aurangzeb (1658-1707), the person Aurangabad is named after. The Taj Mahal was built by Aurangzeb’s father (Shah Jahan) in memory of his wife Mumtaz Mahal. Bibi-Ka-Maqbara was built in 1679 by Aurangzeb’s son (Azam Shah) for Rabia-Ud-Darani, Aurangzeb’s wife and Azam’s mother. Her tomb sits in the center of the building. 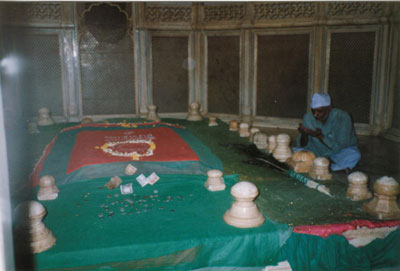 I wandered through the tomb and museum at the end of the courtyard. The surrounding gardens are amazing. The caretakers do a really good job at keeping the plants alive considering Maharashtra is a Savannah and there is a drought.

After the Bibi-Ka-Maqbara I hopped back onto my bike and peddled up the mountain to the first set of caves (“up” being the keyword). At a fork in the road, I had to park my bike and climb up a hundred steps to a mountain face. Somewhere near the cave entrances I collapsed onto a smartly placed stone bench and enjoyed the peace and the fairy tale view of Aurangabad, the Bibi-Ka-Maqbara and a couple of Buddhist temples. 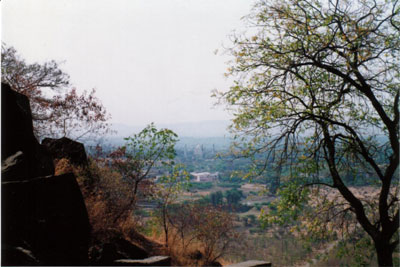 In Aurangabad, there are a total of twelve caves and all were built around the 6th century. They show the influence of the Tantric Buddhism movement of the time. The first set of caves (1-5) are called the Western Group of caves and these caves are obviously Buddhist (though Hindu gods are often added for good luck). Cave #1 and #2 contained a large Buddha in the center of a dark room surrounded by carvings in the surrounding walls of stories and his teachings.

With my arrival in Cave #3, a keeper miraculously appeared out of nowhere carrying a giant piece of mirrored metal to direct light into the cave. This cave was amazing and is a Vihara or a refuge for wandering Buddhist monks during the rainy season. Inside are 12 well-decorated columns that appear to be holding the ceiling up. Within the walls, there were carved monk chambers (their bedrooms). In the centre was another large Buddha.

Cave #4 and #5 are chaitya-grihas or prayer halls. The ceilings in both were very high and the only way this could have been carved out of the rock is from the top down (think of the planning). In fact, all of the caves in the Western Group were carved from a single rock, which would have required astute foresight.

These caves also had a caretaker who was delighted when I showed up. Not many tourists come here as it is quickly overlooked as people head over to the Ellora and Ajanta caves. Needless to say, when I arrived I got an excellent tour! The guide pulled out his sheet of metal and showed me each of the caves, the Buddhas, the rulers from that time (those who sponsored the building of the caves), and the ornate sculptures of half-naked women. The Aurangabad caves are famous for these women and their detailed hairstyles. The caretaker was very proud of this fact and declared: “At Ajanta they don’t have these women!”

He took me to a Ganesha cave; Hindus see Buddha as one of the incarnations of Vishnu and don’t recognize him as a separate being. Buddhism is seen as an offshoot of Hinduism. The Ganesha cave may have been an attempt to please the locals and possibly even the king who sponsored the carvings as Ganesha is a very popular God.

After saying goodbye to the caretaker, I hopped on my bike and headed downhill (yea downhill) to the Panchakki. The Panchakki was built in 1695 by Malik Ambar an Ethiopian sold into slavery at a young age who eventually became a powerful lord in India. The Panchakki and mill are a brilliant example of medieval architecture. The pools surrounding the mill contain water which is supplied by an underground water canal that connects the site to its source 6 km north of Aurangabad. The water is siphoned up from clay pipes and pumped into a reservoir. The energy created by the flowing water is in turn used to turn the grinding stones and power the flour mill. Thus, the people of Aurangabad got their flour without having to do any work!

The Panchakki also houses the body of the Sufi Saint Baba Shah Musafir who was buried there in 1624. A large Banyan tree stands over the ponds and is so large that it provides shade to everything around it. 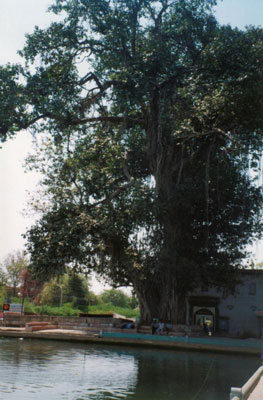