Note: Photos of the Marina Beach taken at sunrise on a different day.

I just had the most amazing day. I decided to walk to Marina Beach because our waiter at the Boopathy (Sami / Walter) told me it wasn’t a long hike. His information wasn’t entirely true and as I walked down the amazingly dry, hot, arid, dirty, noisy, chaotic Perilyer High Road all I could think about was getting to the ocean and cold water.

Today is Republic Day, a national holiday that symbolizes the date India adopted its constitution and declared itself a republic. This also happens to be the same day that Gandhi declared India’s independence from Britain. It’s a pretty important day in the history of India and people everywhere were in a festive mood.

I made one interesting observation as I journeyed along Perilyer; today was my first adventure without Clarissa and I noticed that people weren’t as “in my face” as they normally are (at least until I got to the beach). I walked unhindered until I got to the Madras Fort train station and found a really peaceful dirt road that wound its way towards the Fort. On either side of the road, there were huge weeping willow-like trees and it felt like a reprieve from the sun. Eventually, I found my way back to the noisy, dirty, busy, hot streets of Madras and kept wandering, trying to find the beach.

I ended up around Bose Road in Georgetown and in need of water. Just when my need was as bad as could be a man came over, beckoned for me to follow, took me to a water vender, hailed a rickshaw and sent me off to Marina Beach. I’m grateful to this man because Marina Beach and the ocean were a heck of a long way from where I was.

The beach was full of people celebrating Republic Day — tourists and locals alike. To get to the sand I had to cross through walkways with vines covering them, temple-like structures, peaceful grassy areas, and hordes and hordes of people. And, the moment I stepped onto the dirty, garbage-strewn sand I was surrounded by people. I couldn’t imagine what it would be like to try and sunbathe. You wouldn’t get any sun with 50 men surrounding you and gawking at your skin. Group after group and pack after pack of boys followed me asking question after question: Can I have some water? What is your name? Where are you going? Where are you from? What are you doing? Where is your husband? Why isn’t he here? Do you have a cigarette? 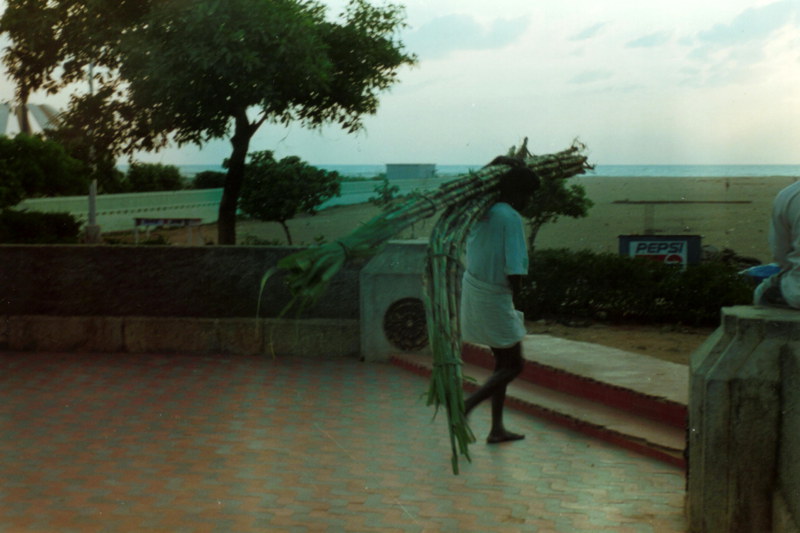 I walked for eons on the beach before I got to water; once there I walked right in and up to my thighs (getting my dress wet in the process) just to rid myself of all the people. The oddest thing of all was the realization that even though there are thousands upon thousands of people on the beach, not one of them ventured into the water — just me.

The smell of Madras intensified around the ocean. Upon realizing this and what must be in the water to make the smell permeate so strongly made me quickly leave the safety of the water. On the beach, the packs of boys came back. Do you have a camera? Why were you in the water? Are you American? Do you speak English? Fifty boys by the time I got to the road. “I work in a hospital.” “My name is Sangee.” “I’m from Bangladesh.” On and on and on and on and on. By the time I made it to the street I was exhausted.