The Town of Irricana

Combine the words “irrigation” and “canal” and you have the name of a small town in Southern Alberta named “Irricana,” established in 1911. This year (2011) marks the town’s centennial celebrations.

Many moons ago there was a website on the ‘net that collected lovely historic vignette’s submitted by Irricana’s residents; the site has since disappeared but many of these collected stories can now be found on the Irricana website.

Below is a snippet about the Irricana Hotel (pictured above) submitted by Harvine Gilberg. The full story (and many more) can be found here.

The progress of the town was a hard thirsty business with the building of the railway and the town and the farmers busily breaking sod for the new farms so it was felt that a “watering hole” was needed. The “powers that be” decreed that it could only be housed in a Hotel and that such a hotel could only be built in a town of proper size. Unfortunately, the facts were that the town was too small but they (the thirsty villagers) were short on citizens but long on ingenuity.

Someone came up with the idea of building a row of shacks and furnishing them with a stove, bed and table and chairs, with a few other homey touches added so that when the inspector came to look the situation over things would be impressive…

Getting to Irricana an easy half-hour drive from Calgary. It’s well worth the trip to visit Pioneer Acres, which we accidentally stumbled upon on a pass-by to Drumheller. It was (I would say) the most pleasant discovery of the summer.

Pioneer Acres is open seven days a week, May 15 to September 30 from 9-5. The cost is $7 for adults and free for children under the age of 12. Make sure you have cash on hand, which is the only means of payment accepted.

As you drive towards the park entrance, the first thing you see is a well-preserved example of an early Alberta pioneer house. After paying admission, you’re taken via a golf cart to the house and outlying buildings. 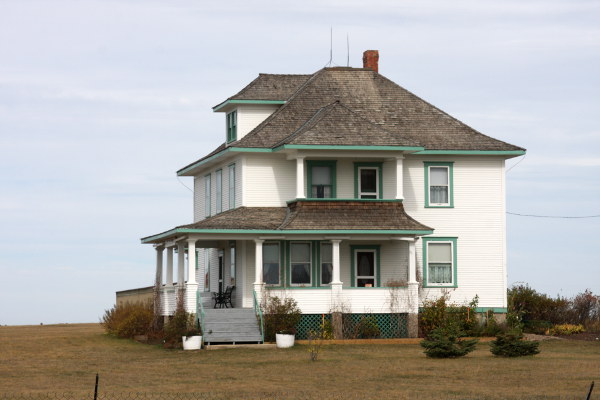 Like many of the early pioneers to Alberta, George and Salome Long moved to Irricana from Cando, North Dakota in 1911 when the Canadian Pacific Railway advertised cheap and fertile farmland to anyone willing to farm it.

In North Dakota, George was a school teacher and Salome an accomplished musician. When they arrived in Irricana, George began farming and pursuing local business opportunities. Salome continued her music and taught voice and piano lessons. Their daughter, Ester, eventually became a well-known musician who studied in both Chicago and Calgary.

George and Salome soon recognized their need for a larger house and in 1914, the Long House was built. 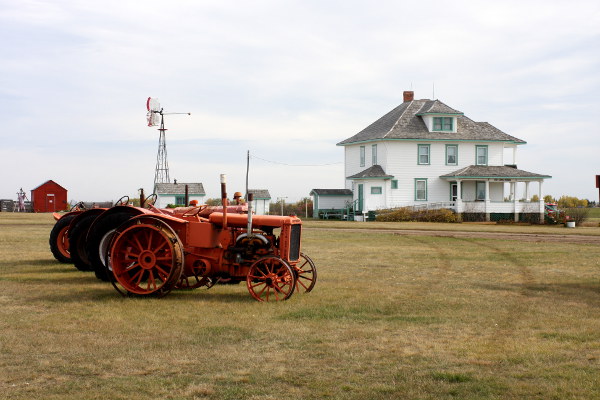 The first structure you encounter when you pull up to the house is a windmill — part of a rather inventive wind-powered system. The house was one of the first to have running water, supplied via a large water tank in the attic. The windmill pumped water from a water source, across the yard, and into the tank in the attic.

In addition to this, a carbide gas/pressure tank system was used to light the house. These were eventually replaced by batteries because George was nervous about the gas pressure system. Electricity came to Irricana in 1949. 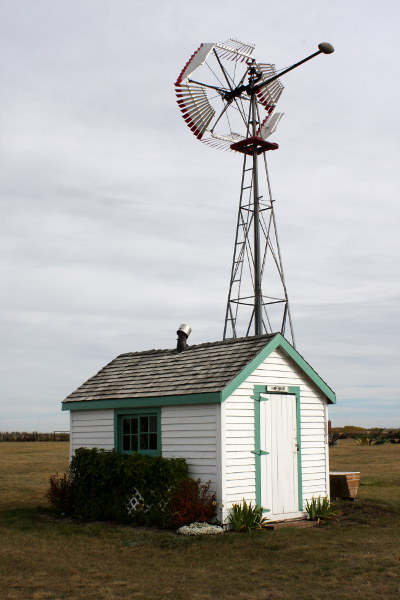 Inside the house, you travel through time to experience what it was like to live in a world without electricity, the internet or television; a time when music was the primary source of entertainment and family, community, ingenuity, and hard work were an important part of everyday life.

Below is a view of the kitchen. The shelves to the right (next to the bright red pump) are actually a dumbwaiter that was originally used to transport food and goods between the different levels of the house. The pulley system on the top shelf is just out of view in this picture. 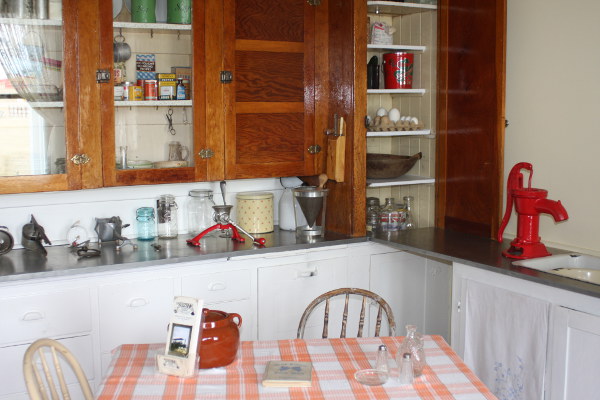 A view looking down into the dining room and parlour. Much of this family’s life revolved around dinner parties and music. 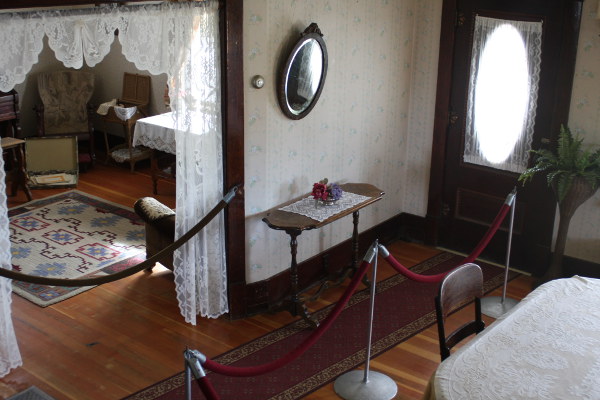 The nursery where much frolicking and fits of imaginative play must have happened. It was difficult to get single panes of glass. However, George spared no expense and had glass imported. One window outside the nursery is original to the house. 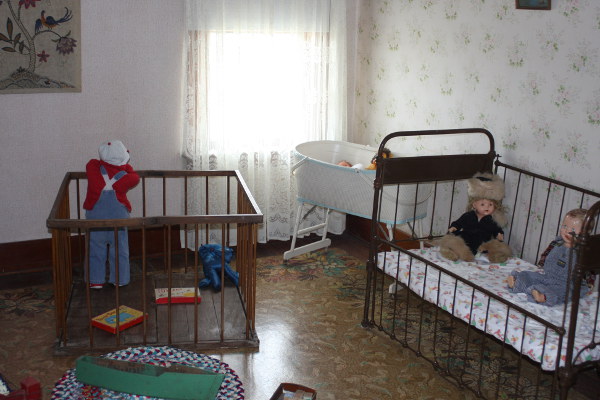 Below is the spare bedroom, which wasn’t much of a bedroom in the winter. As many Canadian’s know, winter in Alberta is long, hard and brutally cold. Winters are tough on livestock as well as people.

Small animals and birds like chickens rarely survived the winter. To keep their livestock alive, the Long family kept them in the spare bedroom during cold spells. 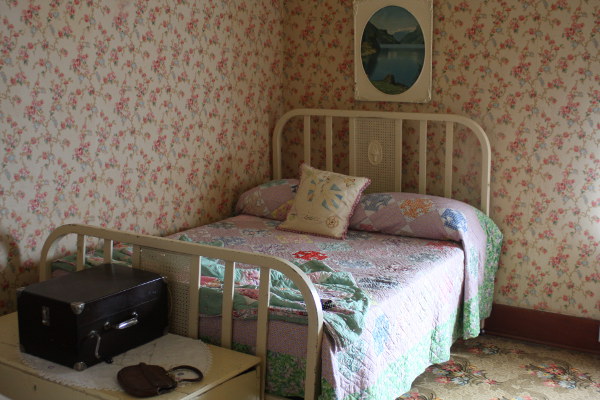 George and Salome, their children, and grandchildren lived in the house until 1992. It was then donated to Pioneer Acres and moved to its current location in 1993. The interior that visitor sees is a “restored to 1929” version of the house.

Not far from the town, along a quiet stretch of highway, you’ll find the Irricana United Church, which was built in 1919. If you have a moment, take time to explore the early pioneer graves that date to this time.

Remember Esther Long, the musician from above? She and her husband Jack Crawford were the first couple to hold a “formal” wedding at this church in 1929. 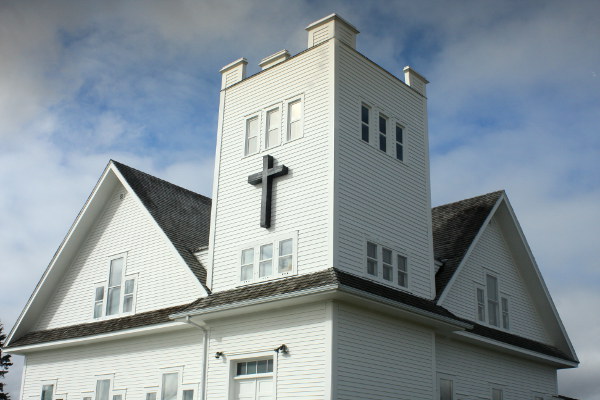 Kid Rating: 3.5 out of 5 because I liked visiting the house (Long House) and the tour lady Elizabeth was really nice and friendly. I liked the school play area and liked going from building to building in a golf cart. There were lots of old trucks. I really want to go back again.

Adult Rating: 4.5 out of 5 because it was easy to find and interesting. The museum, grounds and collections are the results of years of volunteer work and donations. You could really see the dedication and effort put into restorations. There was a little bit of something there for everyone. I really enjoyed the Long House; it was like finding an unknown jewel on the prairies.

6 comments on “Pioneer Acres, Irricana”Add yours →