If you’re ever in Washington, the Museum of Natural History is a must. Upon discovering it, I wanted to spend the rest of my day there. Katherine and I (we had gone our separate ways after the Washington Monument) planned to meet at the Federal Triangle for lunch. Instead, I hunted her down and convinced her to go to the MNH for lunch.

I must admit, while here I really missed La Niña. I think the museum is something she would have really enjoyed (I would have liked to see her reaction to the elephant in the lobby); especially the animal displays.

One exhibit I really enjoyed was The Spirit of Ancient Colombian Gold exhibit on the main floor. Whilst studying Archaeology I took a fair many courses on the indigenous peoples of South America. It was very exciting for me to see many of the things I studied.

Here are some select items and their museum write-up so you can see how death focused many of these cultures were (or perhaps the researchers are death focused):

Travelling to the World of the Dead 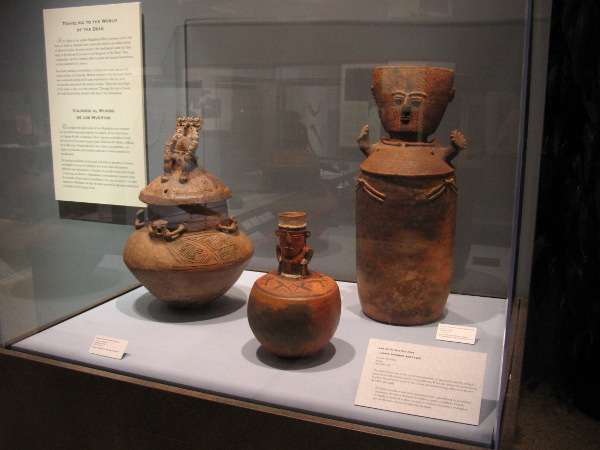 “In the valley of the middle Magdalena River, funerary urns in the form of chiefs or shamans were commonly used for secondary burial of skeletal remains. In some societies, the ritual burial marks the final stage in the deceased’s journey to the Kingdom of the Dead. They occasionally visit their relatives, hid in masks and musical instruments, or take possession of a dancer.

Secondary burials, or re-burials, in ceramic urns, were practiced by many societies in Colombia. Skeletal remains of the deceased relative were exhumed and placed in large individual or collective urns occasionally associated with animal remains. These urns were kept in the house, a cave, or at the cemetery. Through this type of burial, the individual identity blended with that of the social group.”

The Words of Coca 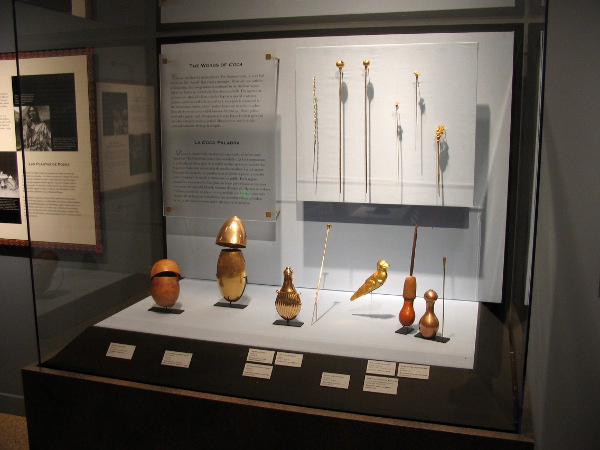 “Coca is considered a spiritual food. The shaman needs the coca leaf, which are like “words” that convey messages. There are two varieties in Colombia, Coca novogranatense is cultivated in the Andean region where the leaves are mixed with lime from seashells. The agent that activates the alkaloid is lime, which is kept in a special container and removed with a small stick. Coca ipadu is consumed in the Amazonian region, where crushed leaves are mixed with ashes from the leaves of a tree called Cecropia. Some priests received a knapsack with coca leaves for their personal use after a lengthy training period. Muisca priests used coca for spiritual food and offerings in temples.”

“In Amazonia, a young man can use coca only when he reaches adulthood; then he must make a basket to collect the leaves. While he chews the leaves and listens to the words of his father or grandfather, he assumes a basket-like position with his body. “Mambear,” to chew coca, mean to weave one’s own body-basket in an upward spiralling coil.” 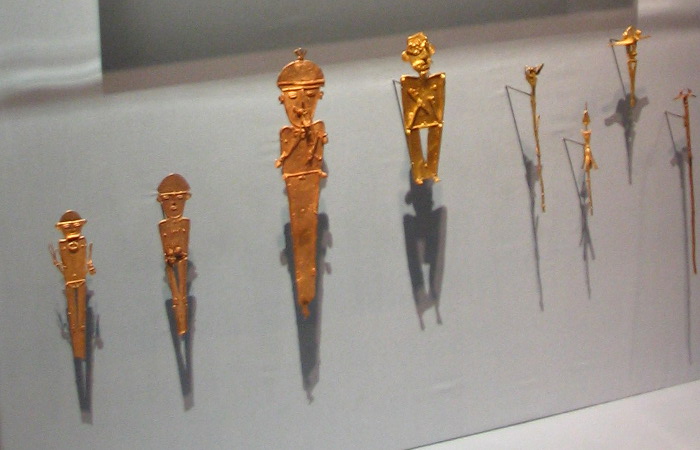 “Some warriors deformed their head, ears, nose and extremities and even filed their teeth to resemble a feline, vampire, eagle or serpent in combat.

The Muisca practiced various kinds of human sacrifice. In one type the victims were youths from the Colombian lowlands who were sometimes replaced by macaws and parrots that had been taught to speak: in other words, they had been transformed into people. The bodies and the blood of those sacrificed were offered to the Sun.” 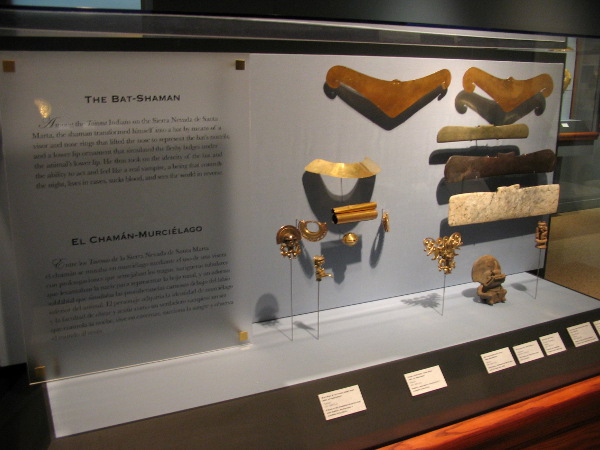 “Among the Tairona Indians on the Sierra Nevada de Santa Maria, the shaman transformed himself into a bat by means of a visor and nose rings that lifted the nose to represent the bat’s nostrils and a lower lip ornament that simulated the fleshy bulges under the animal’s lower lip. He thus took on the identity of the bat and the ability to act and feel like a real vampire, a being that controls the night, lives in caves, sucks blood, and sees the world in reverse.”

2 comments on “National Museum of Natural History”Add yours →