I’m a sucker for all things odd, and it’s for this reason that spending an afternoon in Ripley’s Odditorium was a treat.

Robert Ripley was a well-known cartoonist and TV presenter and eccentric personality behind the Believe It or Not! franchise.

Once the cartoon took off and became immensely popular, Ripley became a world traveller, seeking stories of bizarre and unusual proportion to put in his internationally known feature. In an era when not many people travelled outside their own hometown, let alone out of the country, he became a compulsive traveller and journeyed whenever he could!… It was also during these travels that he picked up many strange and unbelievable souvenirs that later became an extensive collection of amazing oddities and stories that serve to entertain the public even today. — http://www.ripleys.com/mr-ripley/ 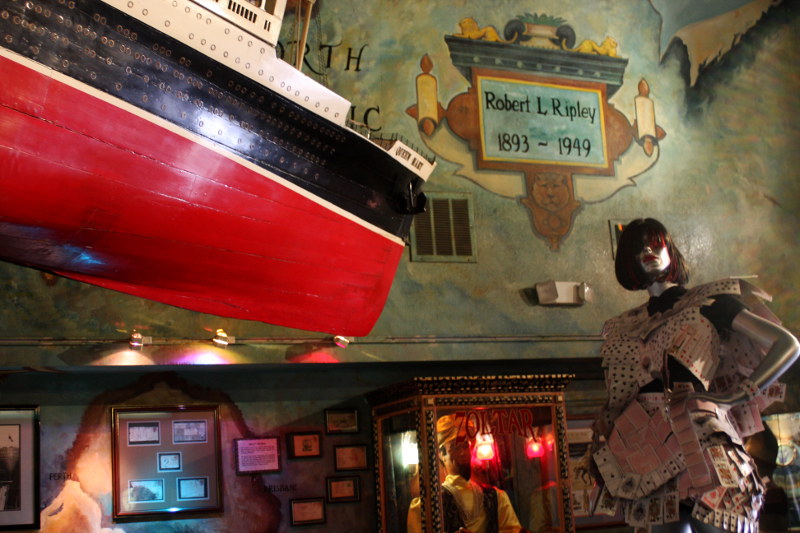 If I could change anything about the experience, it would be the outdated explanations for artifacts that made me feel like I had somehow transported back to the naïvety of the 1950s… but then again, Ripley gives you the option to believe it or not.

The Sign: A tobacco enema kit for restoring the dead. Before the advent of CPR for resuscitating drowning victims, doctors used tobacco enemas to bring them back to life.

Me: Not. Tobacco enemas were a common practice amongst North American Indians who used them to treat a plethora of stomach problems. I’m also not sure that doctors used the practice to restore the dead, but probably used it to rejuvenate people who were unconscious but showed signs of life. 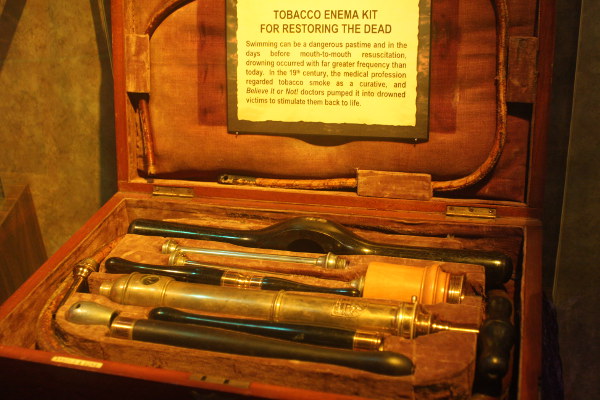 The Sign: Madame Tussaud originated the word “undertaker” after clients asked her “to undertake” their faces for posterity after death. Shown are two samples of a Tussaud-style mask — one is of Napoleon of France.

Me: Definitely not. There is a book written about this. Madame Tussard (or her style) has never been associated with the making of Napoleon’s death mask — though she did create wax figures of him in life.

The better story is about the attempts that were made to create Napoleon’s death mask. At the time of death, Napoleon was exiled on Saint Helena island. His primary physician, Dr. Antommarchi, attempted to make a cast but failed. A second doctor, Francis Burton, successfully made a cast, but half of it was stolen by Napolean’s attendant, Madame Bertrand. Copies exist, but the location of the original is unknown.

The word undertaker originates in the 1400 as, “a contractor or projector of any sort.” This comes from the word undertake. The specialized sense emerged from funeral-undertaker (1698). Marie Tussaud wasn’t born until 1761. 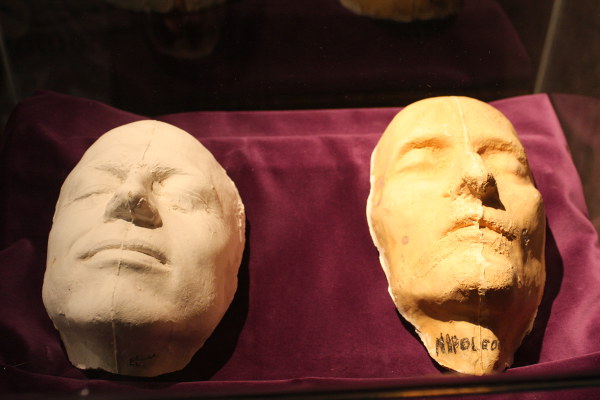 The Sign:Ivan Chabert, a 19th century Parisian baker known as “The Human Salamander”, could enter a blazing oven with two raw steaks, and emerge when the meat was well cooked – unharmed and not even perspiring.

Me: Not. Ivan Chabert was a very good illusionist and one of the entertainers exposed in the book Secrets of the Sideshows. His act was largely based on simple trickery (the oven wasn’t hot) and illusion. A thermometer was heated ahead of time to make the audience think the oven was hot, and raw steaks were cooked directly over a small fire in the centre of the oven (after the door of the oven was closed). 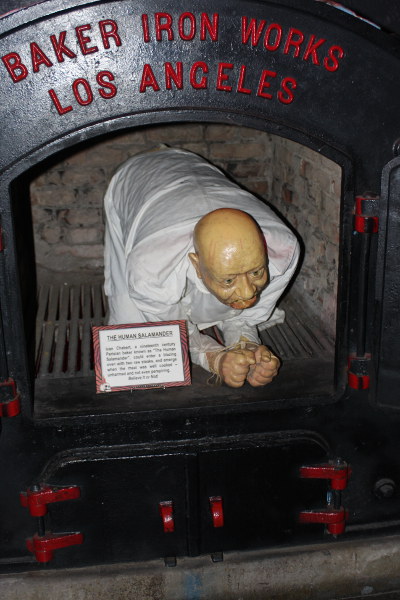 The Sign: Robert Ripley relished collecting what he called “Pranks of Nature”. Once considered an omen of disaster, most animals born with two heads or multiple limbs, including this one, are stillborn. An autopsy of this goat, born in California in 1968, revealed that each head had a normal trachea and esophagus, but they each led to only one lung.

Me: Believe it. Ripley always managed to find great “pranks of nature”. Polycephaly is most common in turtles and snakes. The next common in occurrence is cattle, sheep, pigs, cats, dogs, and fish. 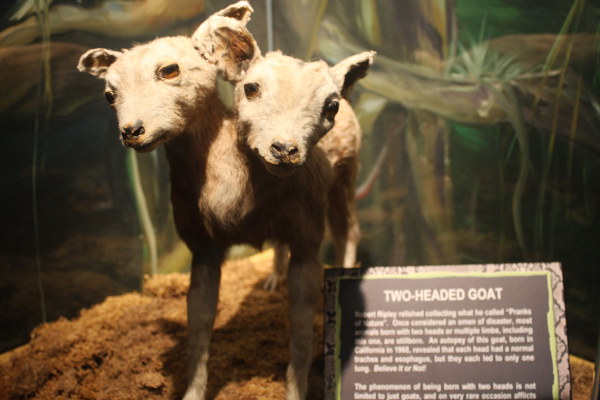 The Sign: This ornate fruitwood chair was used by Dr. Gardner, King of British witches while presiding over pagan ceremonies, and acquired from his estate in 1973. Born in 1884, Dr. Gerald Gardner was the father of modern witchcraft. Combining magic with sorcery, he simplified the complex ceremonial rights [sic] of 19th-century witchcraft and made the coven the center of the ritual. He also insisted all attending witches be “sky-clad”, so all rites were performed in the nude.

Me: Believe it. While on his way back from a trip to Lebanon, Dr. Gerald Gardner suffered a fatal heart attack. Rather than bring his body back to England (his destination) it was buried in Tunisia during a port stop. After his death, Gardner’s possessions were sold to Ripley’s, Believe It Or Not.

The man sitting in the throne is not Dr. Gardner, but rather Liu Ch’ung, the Double Eyed Man. 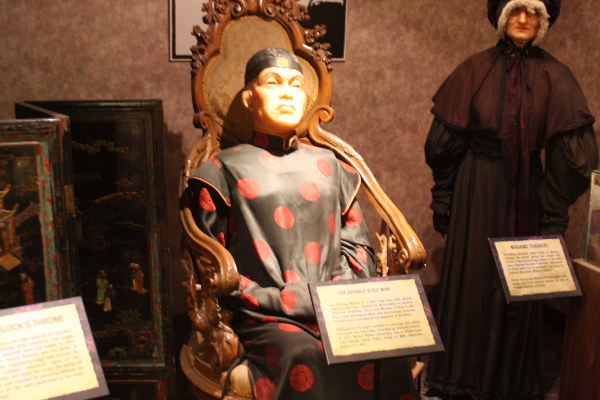 Me: Not sure. The arrival of vampires in popular culture didn’t happen until 1897 with Dracula, and most kits you find on the internet dating to the 1850s (like the one below) are forgeries. However, this particular kit is considered authentic by people around the internet who know more about such things than I. 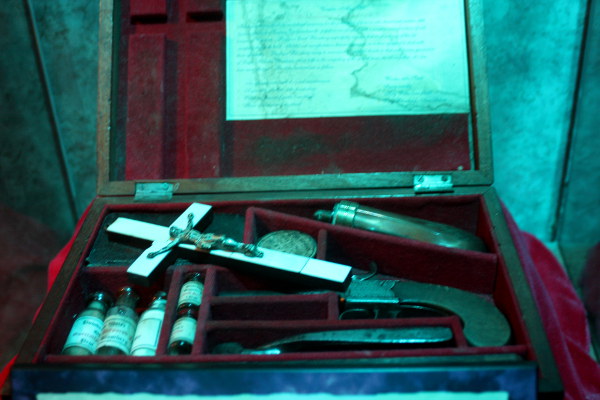 The Sign: Didn’t read it. I studied skulls and cultural practices a fair bit for my osteology/archaeology degree.

Me: The skull on the far left is a Tibetan kapala (a bowl made out of a deceased ancestor’s skull). The practice of making a bowl out of a relative’s skull is not only limited to Tibet. Most of the Hindu gods are depicted drinking from a kapala at some point (usually blood).

In the centre is an Ekoi Human Skin Mask. Masks could be carried by Ejagham (Cameroon and Nigeria) medicine men during funerals, worn on their heads (if there is a base), or worn as a mask during elaborate rituals. I’m not sure this mask was for wearing (it didn’t have the neck slits as most do). Also, I couldn’t tell if it was human skin (hundreds of years ago, slaves were used) or animal skin (a later practice).

The skull on the right looks slightly elongated so it may be a skull that has been deliberately deformed, which is common in many cultures (e.g. Incan, Indigenous American, Mayan, Paracas, Huns). This is typically done for aesthetic reasons. 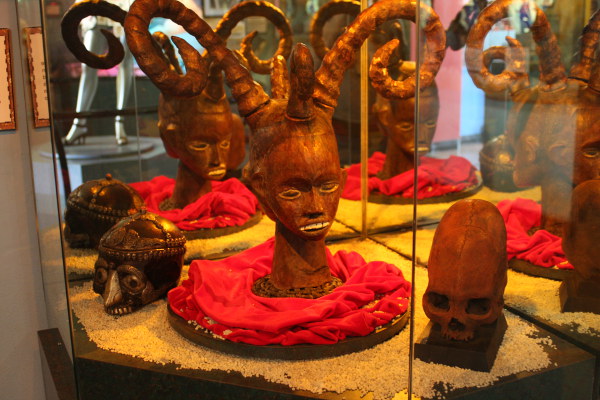 2 comments on “Ripley’s Odditorium, Hollywood”Add yours →