Halifax isn’t such a bad place; so, don’t let my grouchy post scare you away. I don’t think I’ve ever blogged about Halifax even though I’ve spent many chunks of my life there. It’s a city with character, history and enough trip power to keep you going for at least a week. The airport is rather removed from the city (it’s a $56 cab ride to the historic waterfront) and many tourists actually arrive via ocean vessel.

In a nutshell: Halifax was founded in 1749, incorporated in 1842, and disincorporated in 1996 (I will touch on this in a bit). It is the largest city in the Maritimes, built on a peninsula, the capital of Nova Scotia, it’s Canada’s second-largest scientific center, contains five universities, and people from Halifax are affectionately known as Haligonians. It’s a frequent stopping point for tall ships, luxury yachts (often containing movie stars), cruise ships, Theodore Tugboat fans, genealogists, history buffs, and was recently recognized as a gay-friendly destination. Here’s more about Halifax if you’re interested in filling your brain with details about Canadian history.

To me “Halifax” is the dense urban area on the peninsula surrounding the historic Citadel. However, officially (as of 1996) “Halifax” — or rather the Halifax Regional Municipality (HRM) refers to not only the peninsula, but also the mainland areas of Dartmouth, Cole Harbour, Bedford, Lower Sackville, Sable Island, and Windsor Junction. This makes Halifax roughly 10% of the size of the province of Nova Scotia.

For my purposes, I’ve limited the Halifax that I’m writing about to old Halifax — the Halifax between Cogswell (N), South Street (S), Robie Street (W), and Lower Water Street (E). I spent most of my time wandering back and forth along the historic waterfront, meandering in and out of historical sites, eclectic stores, and trying to find my way through the fog. Eventually, I found my butt parked at Perks Coffee Shop on the waterfront where I could access all things internet before getting onto a ferry to Dartmouth. 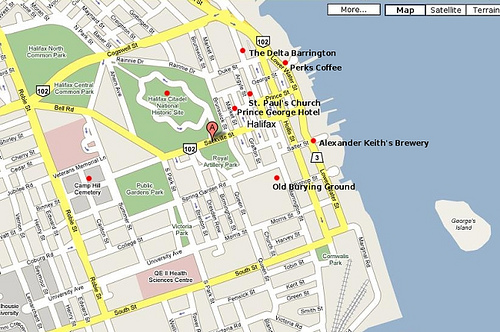 Good character hotels in the area (all interesting and within throwing distance of each other): the Delta Barrington, the Prince George, the Delta Halifax, and the Halifax Marriott Harbourfront. All can be fairly pricey with the Delta Barrington being the cheapest at $150 a night.