During an entire year of studying, documenting, and practically living with several boxes of bones from Head-Smashed-In Buffalo Jump, I’m a little hesitant to mention that I never actually visited the cliffs where each little remnant of bone originated. I’m hesitant because it makes me feel like a bad researcher though even today I can still remember the bones and the stories they had to tell; tales of relinquishing their marrow as food, of being turned into tools, of seasonal hardships, and their last inevitable trauma.

To remedy this, on Sunday La Niña, myself, and a group of ThoughWorkers all piled into vehicles and headed south to Head-Smashed-In (from Calgary hop onto MacLeod Trail and head south for two hours until you see the park/buffalo crossing sign). The site was utilized by the Blackfoot people for over 5500 years and in 1982 was named a Unesco World Heritage Site.

For those of you unfamiliar with what exactly a buffalo jump is: each fall Blackfoot Indians obtained their winter food by driving an entire herd of buffalo over a cliff. It took weeks of preparation, planning and waiting before conditions were optimal. When everything was just right, the Blackfoot would then lure the buffalo from a seasonal grazing area in the Porcupine Hills to prepared drive lanes lined with cairns stuffed with branches and brush.

Here men worked in teams: some dressed as wolves who approached the herd from behind, one “lost buffalo” who led the herd towards the drive lanes, and eventually the cairns (and people suddenly standing behind them) that drove the buffalo to the cliffs where they plunged to their deaths. The buffalo carcasses were then processed by women and children at a nearby camp. 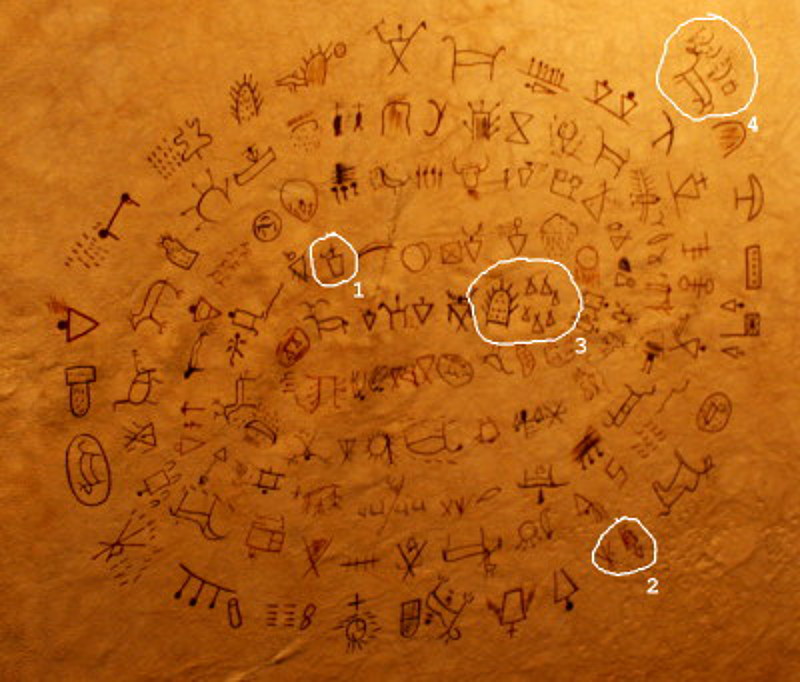 One of the more interesting finds (for me) in the Interpretive Centre was a buffalo hide winter count depicting 115 years of Peigan life. Winter counts were a simple way of keeping track of time. Each year during the first snowfall one significant event was painted onto a hide or some other material/item. The one above covers the time period between 1764 and 1879 and is thought to be one of the longest winter counts on record. This count depicts (in spots) the arrival of short-haired Europeans (1), the arrival of the Mounted Police (2), the threat of smallpox (3), and finally when the buffalo disappeared (4).