I’ll just get the big post out of the way… because I know a certain little person is waiting for it.

It all started a while ago… a long while ago… long enough ago for me to get tickets to one of Black Sabbath’s only shows in California. I thought it would be fun for this to be La Niña’s first concert. Why not kick it all off with the legends of Metal (and yes… my daughter does like metal… and swing… and various other types of music).

However, at some point, I came to the realization that I probably shouldn’t be telling La Niña what concerts she should go to or what music she should listen to… I want her to develop her own musical tastes unhindered/untainted.

To make a really long story short, I decided that instead of “making” her go to see Black Sabbath, I would wait and let her decide which concerts she wants to go to… and ask.

Around the same time, girls in our neighborhood and in school started worshiping the boy bands: One Direction, Big Time Rush, and The Wanted. Suddenly, band research is happening, YouTube videos are playing all the time, there are sleepover dance parties, and out of the blue, there’s a never-ending flow of band trivia that would make Alex Trebek weep (and I don’t know if this would be in joy or sadness). It seems the preferred choice of the three bands listed above is The Wanted.

Everything said, all this fanaticism quickly became toxic and some girls started telling other girls that they “weren’t allowed to like The Wanted” or “weren’t good enough to like The Wanted.” This progressed/evolved into “the band is coming to Calgary for a sold-out concert.” Two girls were walking around telling everyone that they had tickets and no one else would be able to see the band. Not understanding what was happening, La Niña was devastated because she wouldn’t get to see Max, Nathan, Tom, Jay, and Siva live.

To her credit, she went to the computer and started Googling concert dates in hopes that they’d be in a city that we pass through. This is when she discovered “the lie.” It seems that The Wanted have never played Western Canada… certainly not Calgary… and have no plans to. In fact, the tour date listings (as of September 2013) are limited to San Diego, New York, Los Angeles, Phoenix, Windsor, and Las Vegas.

This was a friendship ending lie… and the beginning of a musical adventure… because this is when La Niña asked if she could see The Wanted and chose Las Vegas as the destination.

So, we took the Black Sabbath tickets and traded them for iHeart Radio Music Festival tickets (and a ticket to see my favourite band in November). Next, I booked flights and a room using points. And, we got our butts to Vegas.

On the day of the concert, the venue was packed. One thing that the concert organizers planned worked to our advantage. Two stages were set up, which meant that people had to move back forth to see the different performers.

We can thank this set-up and Miley Cyrus’s tears for our front row position. When Miley started to cry during a new song, people rushed over to the CWTV stage see what was happening. This is when we found a front row spot at the Pepsi Stage and stayed there for the remainder of the day.

While waiting in the heat and sun, La Niña made new friends who shared The Wanted lore. They discussed the band and played cups as time and bands passed by.

As the time for The Wanted approached, people became less willing to watch the other musicians. While Avril Lavigne played at the CWTV stage, we waited at the Pepsi stage with hundreds (if not thousands) of unmovable people. I’m pretty sure that if space ships suddenly appeared in the sky, not one of the people surrounding us would be impressed or scared enough to leave their spot. 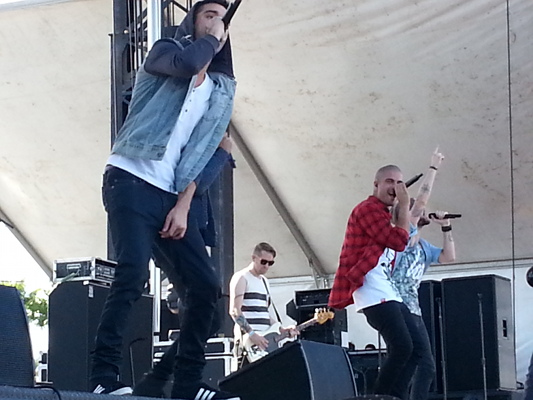 Suddenly there were photographers in front of us and we were pissed. We didn’t wait in the sun and heat to have a bunch of photographers block our view.

Rather than start a fight, I (with the help of the lady next to me) put La Niña on my shoulders. Initially, she was really embarrassed to be above everyone else (and looked mortified) until the band members started giving her dimple smiles and waves.

Then she relaxed and started to sing to her favourite songs: Walks Like Rihanna, Lightening, and All Time Low Own the Night, and I Found You. After a few songs, the band experienced technical difficulties. This is when the singers started playing with the crowd: throwing water, answering questions, and telling jokes. I could hear La Niña laughing like crazy from above.

The music started again with Glad You Came.

When the show was over, the happiness (which was as bright as the sun) stayed for a long time (as you can see below). She got her oo-ooo-ooh-ooh-ooh-oooh-ooohs and now LOVES concerts.