This is one adventure that I seemed to manage to block from my mind until La Niña said something about it yesterday; it’s really her adventure. La Niña is very spirited. She wants to explore and test everything and is currently right smack in the middle of the testing threes. If you so much as utter the word “no” to her she turns into a little raging la-niña-monster.

You can imagine how poorly La Niña travels when there are rules to follow — like the seat belt needs to be done up and the tray table needs to be up during take-off and landing. This particular travel day was also on the same day that an Air Canada flight plummeted out of the sky over the Rockies and everyone was super nervous about seat belts.

I’ve been experimenting with travel times with La Niña. Trying to find a ‘zone’ that is good for her because we are thinking of doing a few longer flights this year. The after dinner zone is now off the table; on this particular flight La Niña screamed like a banshee on a rampage — a good long anger building scream session.

Our steward was really good and he did something completely unexpected. He promised La Niña that if she was patient and waited until the plane was on the ground she could go into the cockpit and push all the buttons. One of her favourite books is Angela’s Airplane so when she was able to get past her raging and realize she could be like Angela she calmed down.

When she was in the cockpit she didn’t do too much except look at all the buttons in awe. It was a little reminiscent of her helicopter adventure during Stampede last year. 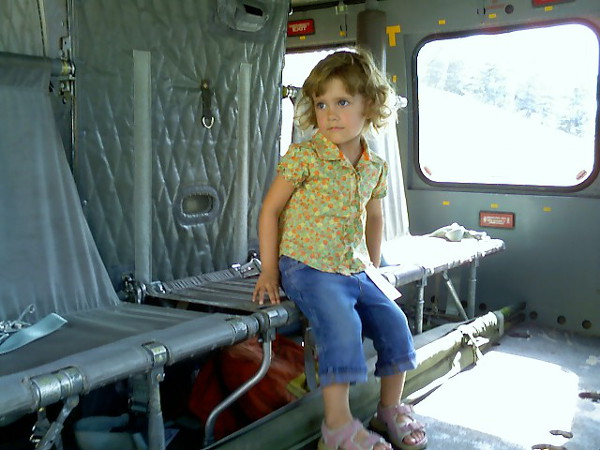 I also didn’t get a great picture of her in the cockpit — and the soother is a new thing. Weaning went very badly. At the same time, a new baby came to the day home — a baby with a soother. Thus, La Niña and her soother are now inseparable. 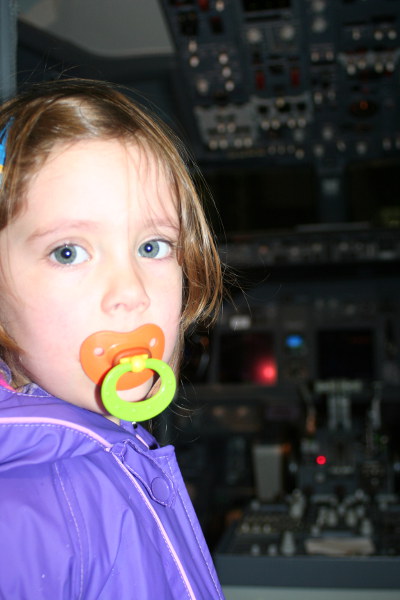