Winter has hit Calgary in full force. I generally don’t mind the cold but when it gets to temperatures that freeze your eyes shut and restrict your breathing I have problems. There’s nothing worse than being outside and feeling like you are having an asthma attack because the air is cold enough to freeze your bronchioles. Tonight we’re sitting at -42 C/F (because both are the same).

I’m currently reading a local history book: The English Colony, Nightingale and District, which is about some of the first settlers to arrive in Alberta — particularly the Nightingale area by Strathmore. On days like today I think about the harsh conditions they had to survive. They came in waves — mostly from Europe — as part of CPR’s and the government’s plan to colonize the west.

Sir Wilfred Laurier was Prime Minister of Canada from the year 1896 to 1911, and it was under his leadership that the government of Canada, supported by the Canadian Pacific Railway, started a widespread and vigorous colonization campaign to develop the Western Prairie Provinces of Canada.

Realizing that the real need of the West was more settlers, Canadian Immigration Offices were established in the British Isles, the United States and various other European countries. Laurier promoted the coming of new settlers by every means possible; travel costs were cut to a minimum and packages of attractive, if somewhat misleading, propaganda literature arrived in all countries overseas enticing people to emigrate and develop the quarter of a million square miles of virgin land that comprised the Prairie Provinces.

Most had no idea of what they were in for, which is evident with the Barr expedition. This particular excerpt is about a distant relative through marriage:

On March 3rd, 1903, he [Edward James] had joined the Barr party expedition; it as under the leadership of two men, one was Reverend Barr, a clergyman from London, England, and the other was Reverend George Lloyd, a missionary, also from England. These men wanted to encourage immigration to Canada to assist the British people left depressed by the Boer War and the generally poor conditions.

These two men advertised in the London Times that a block of land had been acquired in Western Canada… Approximately 2,000 souls answered the call from the London Times. My dad [Edward James] was one of them. This expedition left Liverpool on March 3rd, 1903, on the S.S. Manitoba. It was a completely mad expedition, sponsored by two men who knew literally nothing of the conditions of the Western Prairies and of the hardships and privations they were to endure, and without the monetary means to carry the expedition to fruition. Many of these people took sick and many died as a result of the poor conditions.

The group soon lost faith in Reverend Barr, who was quite unqualified for the leadership of such an expedition, and Reverend George Lloyd took over. Eventually, they arrived in the vicinity of the promised land of milk and honey, a small Anglican Church and a few sod huts were soon erected, but by this time winter was upon them. The sod huts and tents were completely inadequate and the intense cold and loneliness were almost more than this hardy, courageous group of pioneers could bear. They named this little settlement Lloydminster – Lloyd after their leader and Minster for the Mother Church. (The English Colony, Nightingale and District, Pp. 89-90)

I couldn’t imagine living in sod huts or tents in the middle of the bald prairie during winter. The city is not much better at protecting you from the wind — particularly the core where the wind just whips between the buildings like a giant knife. I often wonder why we’ve lived here so long — in a place where we own (and use) clothing that is good to -65C… a place where it gets so cold that the smoke from building can’t rise up (look at the photo below). I wonder why we don’t just move to B.C. where the dogs can run on the beach in the rain instead of laying on their back in the snow like a dead bug when their paws freeze.

We must be crazy. 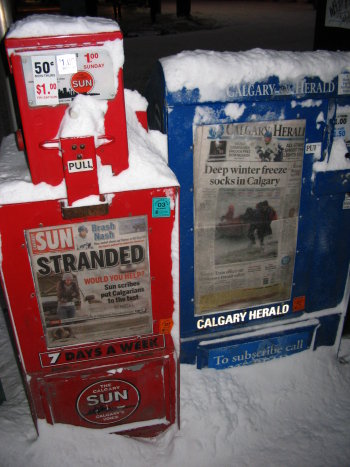 8 comments on “Deep Freeze”Add yours →