Remember Mary Chilton, the 13-year old girl who was the first person to step ashore at Plymouth Rock? And, who’s son-in-law has the oldest headstone at Burial Hill Cemetery?

A few decades after the arrival of the Pilgrims, Mary Chilton and her husband John Winslow left Plymouth for Boston. By the 1650s, Boston was a thriving merchant town and the couple prospered. They lived on Spring Lane; a popular part of Boston (mostly because the spring that ran close by it provided fresh water to the city).

In Boston, she died and was buried (1679) in the city’s first graveyard: King’s Chapel Burying Ground (1630). Another resident of Spring Lane, John Winthrop, the founder of the Massachusetts Bay Colony and its first governor, is buried a few steps away (1649). 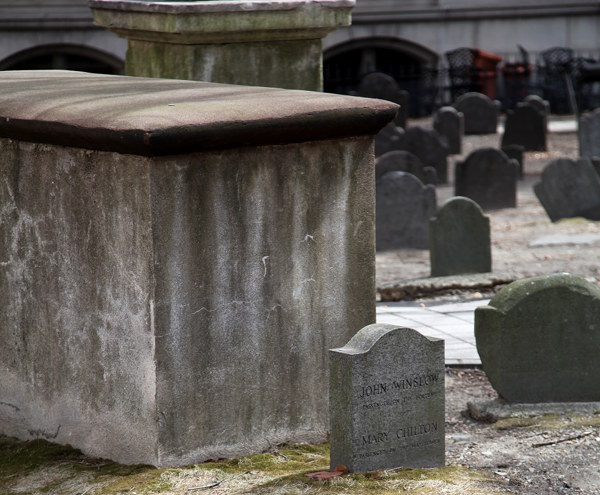 We discovered on this trip the rich literary history that Boston has. In particular, the wonderful world of Nathaniel Hawthorne who you will get to read more about when I start writing about Salem. His literary journey starts with Elizabeth Pain, an early Boston settler accused of murdering her child in 1693. The two lived more than a century apart, but it is said that her tombstone in the King’s Chapel Burying Ground is what inspired Hawthorne to write the Scarlett Letter. 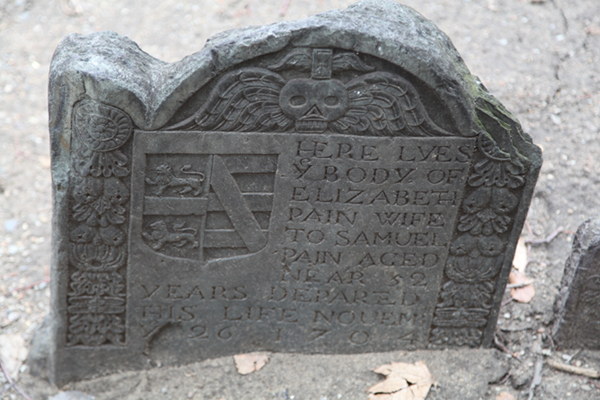 Another literary giant that will appear in a later post, Ralph Waldo Emerson, was born in Boston and died in Concord. His father is also buried in the cemetery.

As an aside, during one tour, the guide (a rather interesting and lively man) told us that the gravestones in this cemetery seem to have the smell of whatever food the subway vendor is cooking below; and because of this has developed the habit of smelling gravestones to see what is cooking. Thinking this was a prank to get unsuspecting tourists to walk around the city smelling gravestones, I disregarded the comment.

However, la Niña did not and while in the cemetery she smelled the stones. The prognosis? They smelled like popcorn!