Technically, the anniversary of the 2013 Boston Marathon bombing was on April 15th, but on the 2014 race day, I will tell a story told to us by one of the people we met while in Boston.

This comes from one of our Trolley drivers who (in March) was returning to his job after many months of being away. He never fully said why he took a hiatus from driving but did say he was working on the day of the bombing and it was a life-changing experience for him.

When the bombs went off, he and his passengers were one street over from the finish line. Within moments people were running away from the explosion and it became so chaotic that traffic could not move. Ironically, he had a trolley full of nurses who were in town for a conference. They’d asked him to let them off so they could go and help the injured.

After they left, he simply sat in the same location because traffic couldn’t go anywhere; people were abandoning their cars and leaving with the crowd. Cellphone towers were shut off so calls could not come in or go out. It was an intense and surreal moment for everyone in the vicinity.

After a time, the nurses came back with injured people. They loaded them onto the trolley in an attempt to get them off the street. One man lay on the floor near the front of the trolley. He was injured quite badly and asked the driver to hold his hand because he was scared and didn’t think he would survive. The driver held his hand and tried to comfort him as best as he could.

After a while, traffic finally started to move and the trolley headed to the hospital with its load of injured passengers. When it arrived, the man near the front gave the driver the bracelet he was wearing to say thank you for holding his hand and for comforting him throughout the ordeal. Though the driver never saw this man again, he still wears the bracelet in remembrance of the day and as a reminder of what is important in life.

I have to say that when you are on the trolley tour, you hear lots of stories from the drivers that all follow the same script (with individual personality added into the storytelling). However, after riding the trolley several times during our stay in Boston, this story was unique and gave some insight into what it was like to be in Boston on the day of the bombing.

To everyone running at the marathon in 2014 and future years… all the best. Run like the wind. 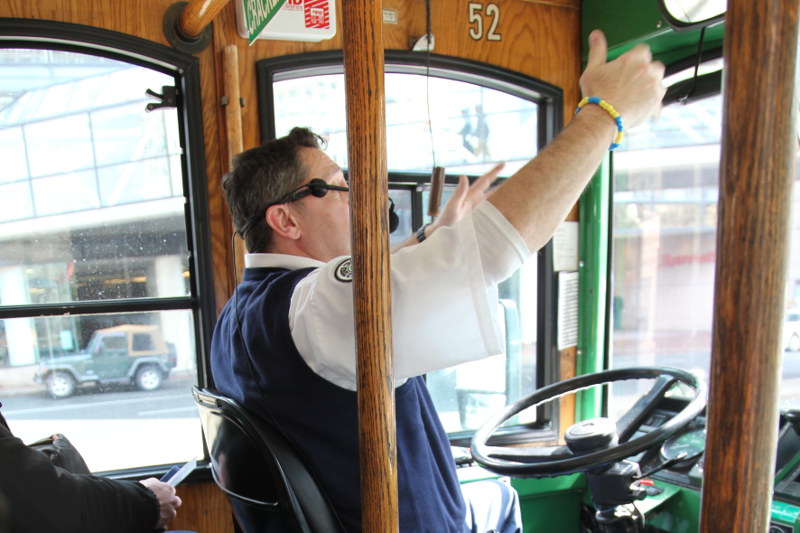 0 comments on “Trolleys and Marathons”Add yours →