There are two military cemeteries in San Francisco. The first and oldest is the SF National Cemetery located in the Presidio complex where people can wander the headstones and look at some pretty spectacular views of the Bay and Alcatraz. This 29-acre cemetery was founded in 1884 and while other cemeteries were forced to dig up their dead and relocate to Colma in 1912, the National Cemetery stayed put and continued to bury military personnel and their wives. The cemetery ran out of space around the time of World War II but “officially” stopped accepting new interments in 1973 (unless a plot was already purchased).

A second military cemetery, Golden Gate National Cemetery in San Bruno, was established in 1937 and took over much of the load from the Presidio.

There are a number of notable military personalities buried in the SF National Cemetery; however, the headstones that really stand out are those with Japanese surnames, some of whom served the United States in the World Wars, but were later imprisoned with their families during the Japanese Internment after the bombing of Pearl Harbour.

San Francisco was hit particularly hard when all Japanese Americans on the West Coast were interned. It’s estimated that 62% of the internees were American citizens (many born in the US) and 30% of those imprisoned were children. 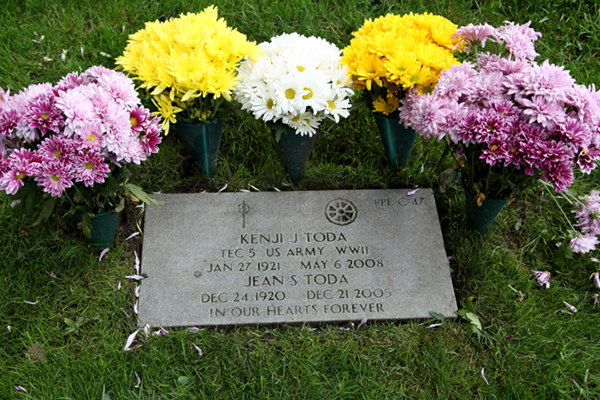 Remember Colma… where entire rows of gravestones are tilted sideways because the earth has moved enough to shift headstones. Well, the same thing happens in the SF National Cemetery but they put time and money into making sure everything is lined up and straightened with precision.

The current realignment project is ongoing. The plan is to remove all the headstones, install a permanent beam system that will keep the headstones in proper alignment and at the proper height, replace the headstones, verify their position is correct (using GPS and maps), and re-sod the area.

This is why parts of the cemetery are currently (summer 2014) under construction and missing sod. 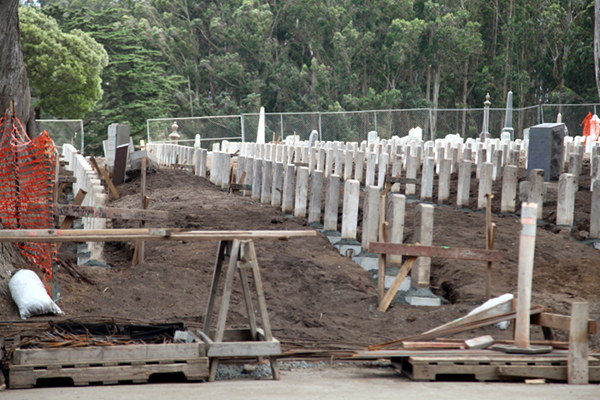