A week ago (Oct 19), the theme for my commute was Ebola. The U.S. was reeling because a nurse from Texas got on a flight to Cleveland and potentially exposed herself to a whole thwack of people.

On that same day, when I arrived in Vancouver, Canadian border patrol was aggressively questioning people about their travel history.

“Have you been to Africa in the last month?”, the nice border agent asked me as I passed through the Nexus line (normally I talk to no one).

“No. Who goes to Africa?” The who does that is my typical response to everything while in travel mode. I find it diffuses a lot of bureaucracy and makes people friendlier.

Not perceived as a threat, I went along my merry way and wondered what it would be like to arrive on a flight from Africa.

This week (Oct 23) ebola was old news and was already integrated into the questioning of the Nexus machines. “Have you been to Africa in the last month?”, the machine asked. “Have you been around anyone who is known to have been exposed to Ebola?” How do you even know the answer to the second question in this world full of strangers?

The polite lady asking questions was replaced by two burly looking men carrying guns and wearing body armour. It took me a moment to realize what was happening as they asked to see the form spit out by the Nexus machine. I thought they were taking the ebola thing to the next level until I exited out into the main airport.

There were soldiers everywhere carrying guns and periodically stopping people to ask questions. I had to pass through three fully armed men to get to the entrance of security screening for my next flight.

It was here that I realized that this was all because of the attacks on soldiers in Ottawa. Vancouver is one of the most international of airports in Canada and it’s no surprise that they’re taking extra security measures. This is in stark contrast to Calgary where CBP walked off the job because they had security fears.

Speaking of Nexus, by November all the buggy machines in Canada will be replaced. During most of my flights into Vancouver, few machines have ever worked. They were so problematic for U.S. Customs that all Nexus machines were replaced by Global Entry.

But that’s not my hack. This hack is very specific to frequent travellers who fly out of the International Terminal at SFO.

If you have Nexus, you have access to TSA Pre. TSA Pre means you can pass through security without having to remove items from your bag or undress. Shoes stay on. Belts stay on. Computers stay in your bag. It saves time, effort, and stress.

The hack is: the International Terminal TSA Pre line is rarely open (I have actually never seen it open). So, on the G side of the International Terminal, instead of going to security, veer right head down the escalator towards the United Terminal. At the bottom of the escalator is a moving walkway, at the end of this is one of the TSA Pre lines for United flights; it’s open all the time.

Go through security here (few people use it) and on the other side veer left through a doorway, walk down a short hallway, and head up the escalator. Voilà! You’re through security and by the United lounge in International G.

Commuting Photo of the Week 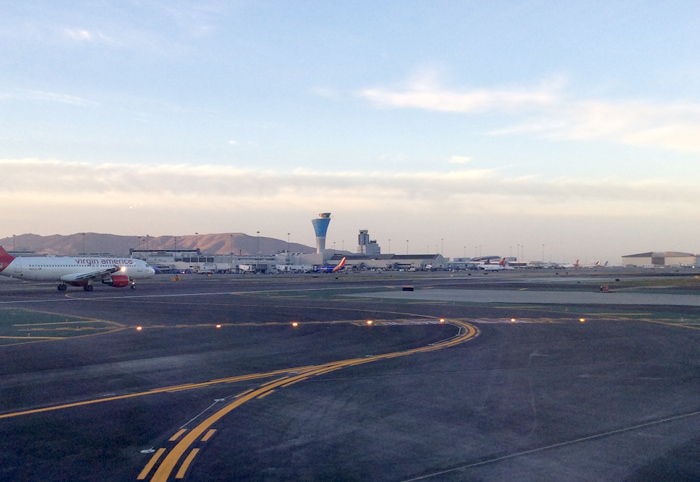 Normally only one runway can be used in SF because of Karl (the fog).

0 comments on “Ebola and Soldiers”Add yours →