If you meander between Stanford University and the Stanford Shopping Centre, you’ll find a large tract of land that remains largely forgotten and untouched. It has been left to nature and is overrun by plants, gophers, birds, and ghosts of the past. To locals, this is known as the arboretum.

Carriage roads cut through it, there are the remnants of a large cactus garden, a few monuments, and a large mausoleum protected by four sphinx guardians at each of the crypt’s four corners.

This is the final resting place of the Stanford family: Leland, Leland Jr, and Jane. About a hundred metres away is the grave of Jane’s brother, Henry Clay Lathrop. It’s highly unusual to have graves in the middle of land owned by a University, especially in a place where bodies are frequently exhumed and relocated (in fact, the arboretum once did house a cemetery that was moved to Arastradero Road).

In this case, the tragedy surrounding this family warrants keeping the mausoleum exactly where it is. 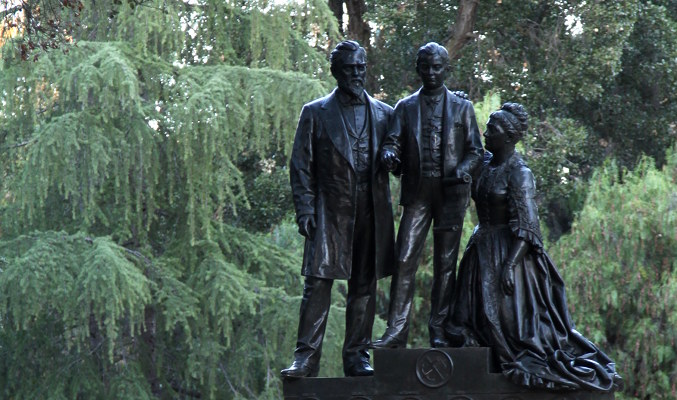 Bronze statue titled “Leland Stanford and Family” and created by Larkin Mead in 1899.

The land under the mausoleum was originally planned to be the location of a new home for Leland and Jane Stanford: a couple from New York who headed West with the Gold Rush. Leland first made his fortune selling shovels to miners and later became one of the Big Four who built the Central Pacific Railroad. At the time of this death, he was one of the largest landholders in California.

Leland and Jane had one son: Leland Jr. who was quite bright and in his early teens was a collector of historical artifacts. At 15-years old, while on a tour of Europe in 1884, he contracted typhoid fever and died in Florence, Italy. His parents were devastated by the death of their only child and rather than continue to build their planned house, they built a mausoleum for their son.

And, they didn’t stop with the mausoleum. Using their own land and personal finances, in 1885 they founded a university where the “children of California” could study: and thus began Stanford University (officially known as Leland Stanford Junior University).

In those early years, tuition was free and there were no restrictions on who could attend. The university was non-partisan, non-denominational, and it freely admitted women. Some say the policies of the university, lenient business practices, and freedom of thought are what inspired and allowed Silicon Valley to grow.

When Leland Sr. passed away less than a decade later (1893), Jane took over as sole trustee of Stanford. Her strong personality and need to control the daily running of the university angered a lot of people including the President at that time, David Starr Jordan. In 1905, Jane was in the process of lobbying to have him removed from his position when she died suddenly in Hawaii of what was believed to be (for a century) a heart attack.

However, in 2003, in a book titled The Mysterious Death of Jane Stanford, Robert Cutler M.D. presented compelling evidence that Jane Stanford died of strychnine poisoning and that the “heart attack” diagnosis was a cover-up fabricated by David Starr Jordan. The poisoning was a second attempt at Stanford’s life. A month earlier, she also suspected that she was being poisoned when water she was drinking tasted bitter. She had the water sent to a chemist to determine the contents and it was confirmed that it contained strychnine.

Regardless of how she died, on February 28, 1905, Jane Lathrop Stanford passed away and joined her husband and son inside the Stanford Mausoleum. During the October Founder’s Day celebrations the university opens the crypt to give people a glimpse of the tombs inside and lays a wreath in honour of the family.

A week after the Founder’s Celebration is Halloween and the university hosts it’s annual Mausoleum Party. Typically managed by the university’s Junior class, the idea behind the event is to spend an evening “partying with Leland Jr.” His death is certainly a tragedy, but without it, there would be no Stanford University. And, I would also argue that without many of the brainy Stanford alumni, our world (and definitely Silicon Valley) would be a very different place.

Finally, as mentioned above, about a hundred metres away from the mausoleum is another memorial known as the Angel of Grief. In the base of the memorial lay the ashes of Henry Clay Lathrop, Jane’s beloved brother who died on Apr. 3, 1899. The memorial is a re-creation of William Wetmore Story’s Angel of Grief which is found on the artist’s own grave in Rome… this statue was replicated in honour of Henry… twice.

The original memorial was carved in Italy using one slab of marble. The sculpture was then shipped to the United States and placed in the arboretum (then a cemetery) with Henry’s ashes. To top it all off, the memorial was covered by a large marble cupola. During the San Francisco earthquake in 1906, the legs holding the cupola crumbled and the structure fell and crushed the angel below.

In 1908, after promising his sister that he would take care of the memorials, Charles Lathrop (Jane’s younger brother) arranged to have another replica of the Angel of Grief made and brought from Italy. This is what now sits in the arboretum.

0 comments on “A Crypt, Death, Murder, and a Party”Add yours →