Most of the street art in Bogotá is bright, beautiful, and certainly prolific… Bogotá could easily be considered the graffiti capital of the world. A large chunk of the art has some sort of political or social slant; and, in some cases, it is used by the government or other organizations as a means of propaganda. Think of them as billboards without the board… and without a product.

I’m referring to street art and not tags. Tags are everywhere too… while taking a photo of one of the churches in La Candelaria, I had to pause for a moment as a couple walked into my photo, pulled out spray paint cans, tagged the side of the church, and then moved inside for the service. This type of tagging is incredibly common in Bogotá but has less perceived value.

Recently, the graffiti laws in Bogotá were relaxed to allow art (with permission from a building owner) everywhere but on historical landmarks, public structures (e.g. bridges), and on government buildings… the catalyst for the change was Canada’s very own Justin Bieber, who, under the watchful eye of city police, painted a maple leaf overtop a marijuana leaf on a public structure.

This drew the ire of local artists and with it came a lot of attention and public scrutiny… especially since the Biebergate happened on the heels of an incident in 2011 when police shot 16-year-old graffiti artist Felipe Diego Becerra in the back while he was painting under a bridge and sparked a new graffiti fervour in the city that featured murals condoning the shooting; but, the eventual outcome in 2013 was relaxed graffiti laws.

As such, the city now draws a lot of street artists from around the world to Colombia to strut their stuff.

No place is more prolific in terms of political messaging than Bogotá’s National University. The campus is one big canvas for students looking to find their voice. While there we saw students painting a new mural.

Below is one criticism of American businesses found on campus. Según el menu tengo derecho al postre roughly translated means According to the menu I have the right to dessert. The man on the left is an American businessman and he is being served by a Colombian official. The menu contains items like education, oil, health, and industry. 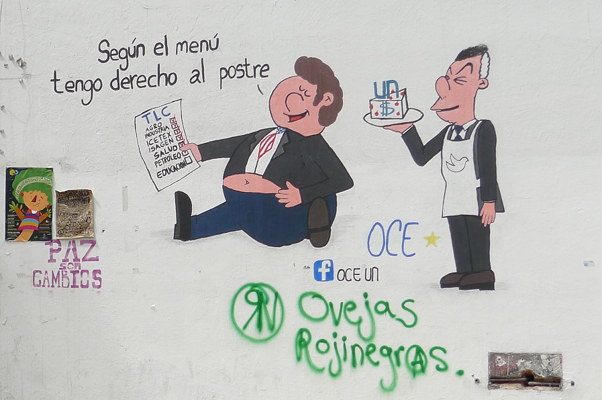 In the next example, found in graffiti alley, is a play on J. Howard Miller’s American wartime propaganda poster called We can do it. In this case, the artist says, No pongas las otra mejilla, which means we won’t turn the other cheek. I’m not sure the name or gender of the artist of this piece, but there are a few women graffiti artists in Colombia. #14 in the gallery was created by a female artist named Zas. 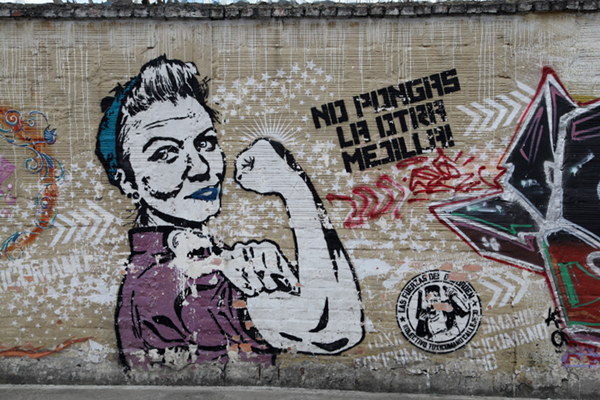 This next example is a stab at Monsanto and Exxon Mobile. There is a fair bit of back and forth in street art between mining organizations and critics. The circle says Comprender el mundo para transformarlo, which says Understand the world to transform it. Besides the right scale it says, Podran cortar todas las flores pero nunca de tendran la primavera, which roughly translates to if we cut all the flowers then there will never be spring. 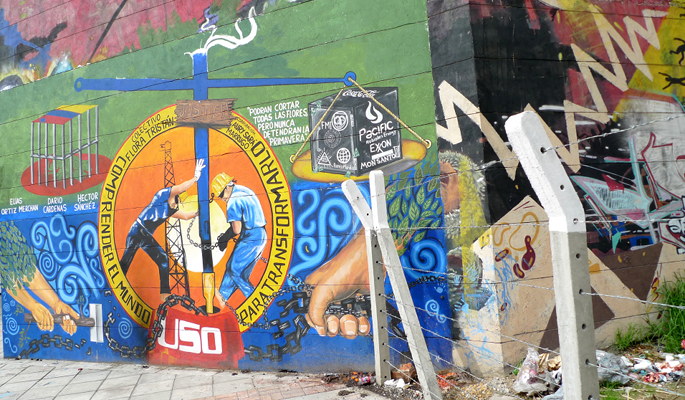 After Afghanistan, Colombia is the worst country in the world for land mine victims. And, the people who are usually victims are not the soldiers, police, and terrorists; it’s women, toddlers, boys, girls, farmers, and unsuspecting civilians. Most land mines are put into the ground by FARC in an attempt to protect their bases and drug crops. But, when they abandon a location, they don’t remove the mines… leaving them for innocents to accidentally find. The graffiti below says, no mas guerras, which means no more wars. 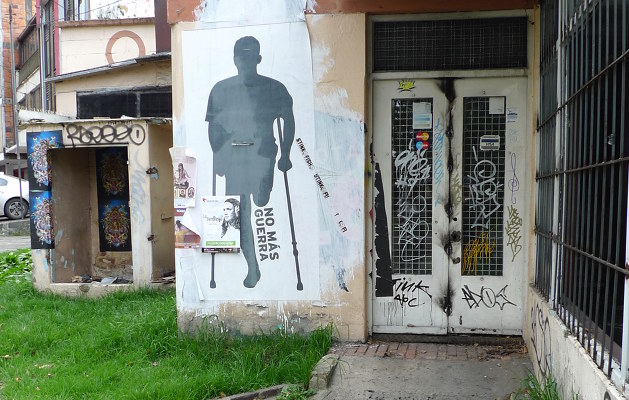 Another political message from outside the entrance to the National University: La lucha social no es un delito, es un paso a la libertad from the Coalicion Larga Vida a las Mariposas; The social flight/struggle is not a crime, it is a step to freedom from Long Live the Butterflies who are an organization who fight against human rights violations. 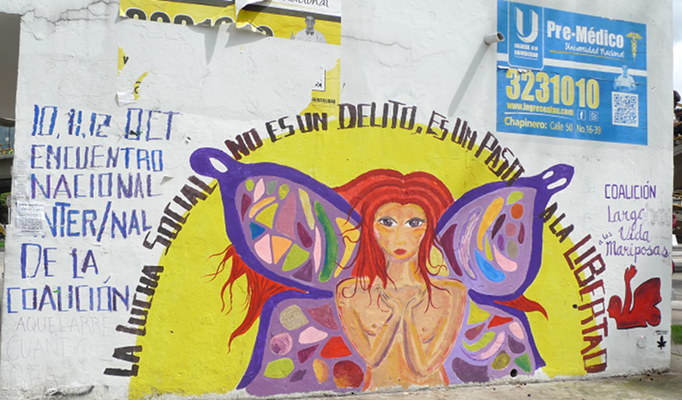 Finally, the assassination of Jaime Garzón shocked Colombia. He was a comedian, peace activist, and radio personality — and not a politician, fighter, soldier, or person involved in crime. His death triggered anger and protests in Bogotá because it made no sense. An extreme-right paramilitary organization was blamed for the crime (but it still remains unsolved). The art says, …hasta aquí las sonrisas país de mierda… which translates to There’s smiles up here, fucking country,” which is a play on one of his popular radio skits. 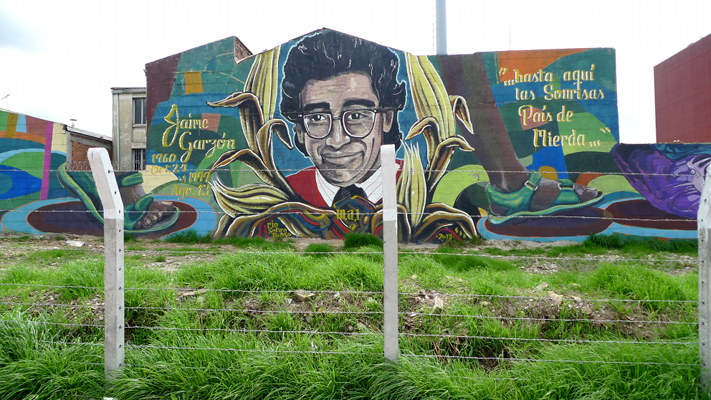 0 comments on “Bogota’s Street Art”Add yours →