Over the decades, Plaza de Bolívar has seen more than its share of blood, tears, and political violence. And, it’s in this square that you’ll find Bogotá’s historic seat of the Archbishop of Bogotá: La Catedral Primada. Most days, on the steps of the Cathedral, scores of people sit peacefully and watch tourists, pigeons, llamas, vendors, and performers who move about in the square.

Compared to other churches in the vicinity, the Catedral Primada is not that old. It was built between 1807 and 1823 and in its short history has faced adversity from nature, insurgents, and political opponents. I call this the cathedral of stories because so many stories surround the construction, destruction, and subsequent reconstruction of the building.

As mentioned in a previous post, the first Spanish missionaries who arrived in Bogotá built a temporary straw and mud church at the site of the city’s founding. There’s some argument between historians over the exact location of this first service. Some say it was in the Plazoleta del Chorro de Quevedo and this is where the Spanish built their first church. Others say it was at the current location of La Catedral Primada that the first church was constructed. Whichever rendition of history you believe determines how many versions of La Catedral Primada were constructed. If you believe that the first church was built at the founding place of Bogotá, then there are only three versions of the cathedral… and this is the route that I will take.

In 1538, as Bogotá grew in importance as a city, the current Archbishop of Bogotá — Fray Juan de los Barrios — wanted a building more elaborate than the small and unassuming church that was built in the Plazoleta del Chorro de Quevedo. As such, Barrios began construction of a church at the site of the current cathedral in 1553: his goal was to build a cathedral worthy of an archbishop from Spain.

The cathedral was an epic failure. The original quote came in at 1,000 pesos… but the actual cost was 6,000 pesos. And, throughout the construction, the building was constantly plagued with structural issues due to limited resources. On the day of Barrios’ inauguration as Archbishop of the cathedral (1565), the building collapsed.

But if anything, Barrios was determined and local folklore says that on the day the building collapsed, the archbishop went to the quarry himself and carried back the founding stone for the next cathedral on his own shoulders. It’s unknown exactly when the construction or the next rendition of the cathedral finished, but by 1678… over a century later and long after Barrios’ death… the second version of the cathedral was fully completed. This cathedral stood for another century until July 1785 when an earthquake partially demolished the building. It was torn down in 1805 and construction on the third and current cathedral began in 1807. 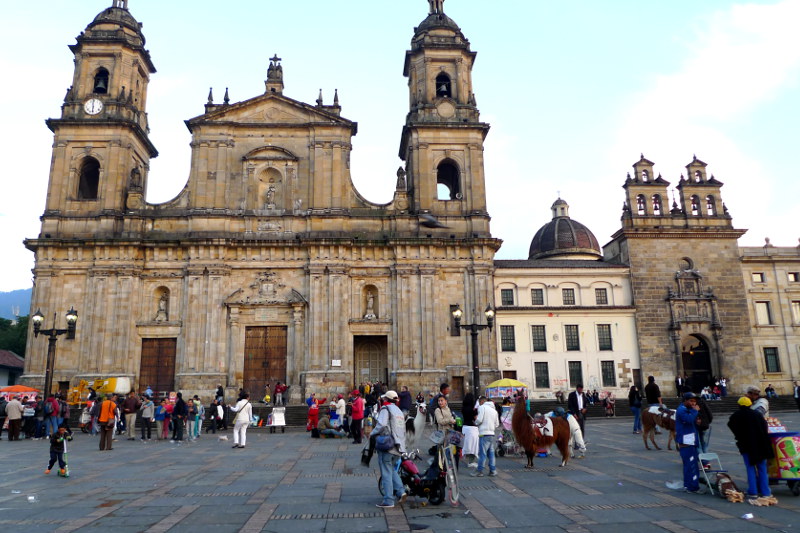 The latest rendition of the Cathedral has been damaged by nature over the years, particularly between 1826-1827 when Bogotá was hit hard by earthquakes. During this time the belltower was severely damaged and needed rebuilding.

Comparatively, the Cathedral figures prominently in photographs from el Bogotazo and Toma del Palacio de Justicia but it seems the Cathedral sustained little damage, unlike the rest of the city in both cases.

Inside, the cathedral contains the bodies of many of Bogotá’s historical figures: Gonzalo Jiménez de Quesada, founder of Bogotá… Antonio Nariño, one of Colombia’s first independence leaders… Pedro Gual, who wrote Colombia’s foreign policy… and Policarpa Salavarrieta, a spy and Martyr of the 1817 Colombian Revolution (she also appears on the 10,000 peso bill). There’s also many of Colombia’s Archbiships and Cardinals: Aníbal Muñoz Duque, Aquinao Camacho, Juan Bautista Agnozzi, Luis Concha Córdoba, Mario Revollo Bravo, Crisanto Luque Sánchez, and Bernardo Herrera Restrepo. Some say that Gregorio Vázquez is buried here and others say he is buried in Nuestra Señora de la Candelaria. Regardless, his paintings figure prominently in the side chapels of the Cathedral.

My favourite feature of the building is the painting around the central dome. It took me a while to notice… but once I did… I couldn’t stop looking at “the foot.”

0 comments on “La Catedral Primada”Add yours →