We partook in a boat tour on our last day, which in hindsight would have been better suited for the first day so we had a good foundation from which to explore the city. But, we were looking for a rainy day (yes a rainy day) so the crowds were smaller and the tour less squishy.

We lucked out with a “misting day” and asked for a tour without a rain tarp. And, since no one else wanted to go in a boat without a top, ours was very personalized so we could ask a ton of questions.

At the medieval edge of the city, the only remnant of the old medieval wall still exists, the waterway gates to the city (because travelling by boat was the main means of transportation).

There is a joke amongst locals about the name. Locals insist on calling the gate the “Three Towers,” but in actuality, there are actually only two towers on the gate. And, because Belgians are very stubborn, the “Three Towers” name still persists. 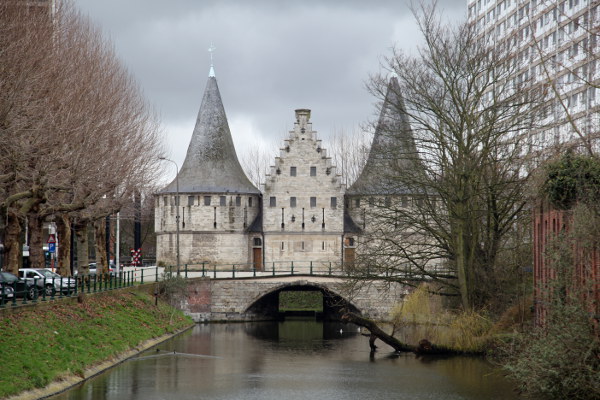 As we were listening to descriptions of where the wine boats/barrels floated, and the fishing boats, and the textile barges, the experience made me think of Lake-town from the Hobbit. I could almost see wine barrels floating down the river to a calm place where they could be gathered… and boats pulling up to people’s houses so their cargo could be unloaded… and the shouts of children running beside the boats and they entered into the city. 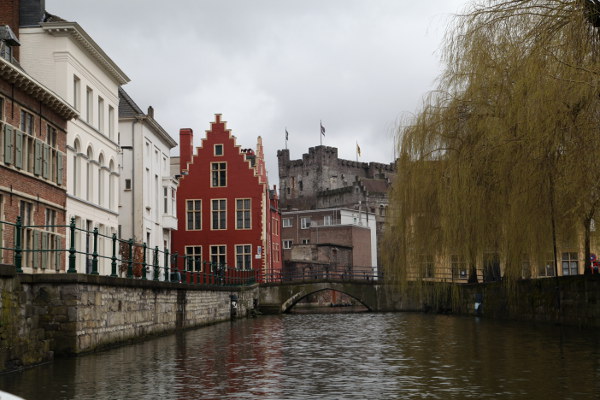 There are many folk stories and tales that involve the rivers in Belgium. The most commonly known is of the Antwerpen, from which Antwerp gets its name. In Dutch, Antwerpen means hand throwing, and in mythology there once was a giant who guarded the river (in Antwerp it is the Scheldt) who demands that all travellers pay money to pass. If you refused to pay, then the giant would cut off your hand and throw it into the river. As the story goes, in Antwerp, a young hero named Brabo slew the giant and threw his hand into the river and freed Belgians from the giant’s tyranny.

I couldn’t help but wonder if this relates to a popular student tradition in Ghent.

Every year in spring, Ghent has a river clean-up. Our guide told us that the city brings in a boat with a magnet every year and they dredge the river for bikes. It is apparently a tradition amongst the students in the city to throw bikes into the river. And, during the river dredging, they pull out over 10-tonnes of metal.

This made sense to me… in lieu of a hand, to throw a bike into the river… the thing you are most dependent on for getting around… ?!

3 comments on “The River Leie”Add yours →