We’d only been in Ghent for half an hour, with no knowledge of what to see or do, when we saw Castle Gravensteen poking up above the buildings in Graslei and Korenlei. And, because I’m not able to resist a medieval castle or church or house, the first thing out of my mouth was: Oooohhhh, it’s a medieval castle. Let’s go there!

So, through the buildings, we wove towards our destination as it played hide and seek behind the buildings of Ghent. And, when we came upon its medieval brick delightfulness, it was grander, taller, and more intact than expected. We would use this as our directional pointer for the rest of the trip.

Locals say that the Counts of Flanders built the Castle as a means of intimidating and controlling the people. From the donjon or keep, the counts could keep watch of the people of Ghent. Most towns in Belgium had a castle of sorts, and the Counts would move around to each of them collecting taxes and making laws as they went. 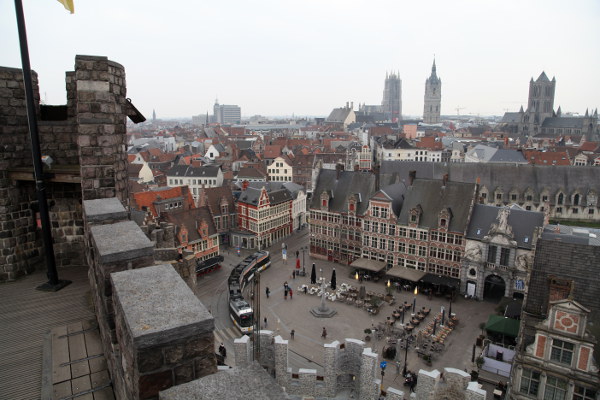 This particular rendition was built by Philip of Alsace in 1180 and is designed after the Crusades castles he saw during the second crusade. It’s not the first castle to be built on the Lieve in Ghent; Archaeologists have found evidence of at least three other wooden castles under the foundation of the castle.

The cross (crux) window that appears at the front of the building (and at the end of the chapel) gives away Philip’s crusader history. When joining the Crusades, each crusader swears a vow and officially “take the cross” and become a part of the peregrinate (self-imposed exile) or armed pilgrimage. This cross became so important to each crusader that it became a symbol for those who fought and because of this appeared all over Europe in architecture, clothing, and art. 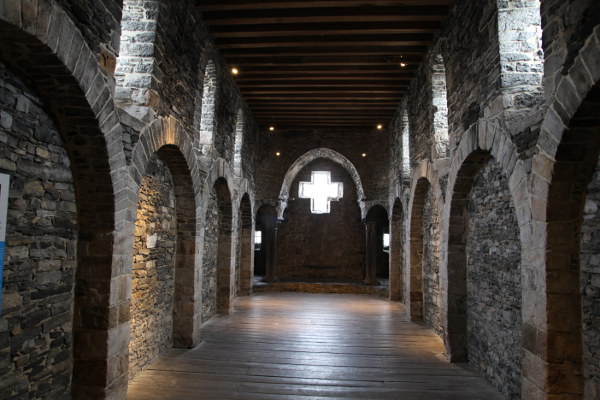 The building is beautifully preserved (and still undergoing repairs) considering it was once used as a cotton spinning mill, a prison, and a mint. Little houses were built against the walls of the castle courtyard for the cotton mill workers. These were torn down in the 1880s when the city of Ghent bought the castle and worked to bring the building back to its original state.

Booby traps, dungeons, and sugar drawers (the torture chamber and not the kitchen feature) are all very much intact and explorable. Areas that deserve a stop-and-read include a room dedicated to medieval weapons (how on earth could a person wield 6-foot claymore or greatsword) and a room that gives a detailed history of medieval torture (complete with blood-covered devices).

0 comments on “Gravensteen Castle”Add yours →