There are two buildings that make up the Belfort. Firstly, there is the old Belfry Tower. Construction started on this structure in 1314 and continued through many community upsets (war, plague, politics) to be completed in 1380. From the Belfry, soldiers were able to see the surrounding city and alert townsfolk to impending danger. Fire was the biggest threat to the city and not approaching armies (like one would assume).

Because of its height, the views from the spire are spectacular. To get to the top you can either take an elevator from the second level to the bell room (some climbing is involved) or walk the 250-ish steps to get to the top. We opted for the climb, which isn’t too bad as long as you hold onto a rope that runs down the spiral stairs; without the rope, it’s an extremely tricky climb given that the stone stairs were hand-carved in the Middle Ages. Honestly, I found the looking-down-from-the-top part much more difficult. There is little space between the structural wall and the edge overlooking the city so you have to squish your way along the outside area and hope that a sudden gust of wind doesn’t blow something off your body or out of your hands (like a camera).

The second building that makes up the Belfort is the Cloth Hall, which served as the headquarters for the cloth trade in Ghent during the Middle Ages (1425).

The people of Ghent don’t employ or use traditional campanologists for musical bell ringing at the Belfry. Some of the music is produced by a giant rolling music box and on special occasions played by a Stadsbeiaardier using a keyboard like a carillon built in the 1600s by bell founders Pieter and François Hemony. There are 54 bells used to make the Belfry’s music. 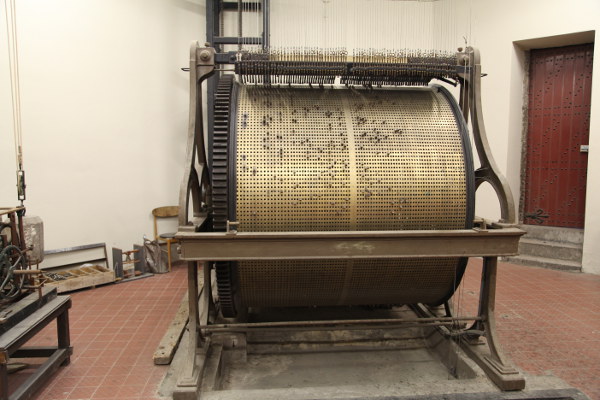 The most famous bell from the Belfry is named Roeland, an alarm bell used to alert the citizens of Ghent of approaching fire or enemies and as an hourly chime (since 1378). There are three dates listed on the side of Roeland: 1314, 1659, and 1948.

1314 is when the Belfry began construction and the original “Roeland” was cast; it weighed in at a whopping 11,023 lbs when it was complete (umm…how’d they get it into the tower?).

In 1540, the warning bell was removed (but not destroyed) by Charles V during a fit of rage over the insubordination and uprising of the people of Ghent (from which they earned the name of the noose bearers). Roeland was broken down in 1659 (the second date) and recast using the same metal in 1660.

The bell was badly cracked in 1914 when an electric hammer was used at the start of the Ghent Festival. Can you imagine being the person who made the decision to use an electric hammer (or the person to push the button to start the hammer) and realize that their mistake caused damage to a 600-year-old artifact? This bell was fixed in 2003, but no longer hangs in the Belfry. Instead, it sits silently in the Emile Braunplein public square between the Belfort and Sint Nicolas.

The third date on the bell refers to a replacement for Roeland, which was cast in 1948 (the bell says, in het jaar onzes heren 1948; in the year of our men in 1948). This replacement is what sits in the tower.

Finally, on the side of the recast bell, you’ll find the words, Mijn Gent, mijn volk, zo trots, zo trouw. Uw taal en tolk bij vreugd of rouw, which means, My Ghent, my people, so proud, so faithfully. Your language and interpreter in joy or grief.

In medieval times, towns, municipal areas, and even people were granted “privileges” by the ruling powers. In some cases, these were land-titles granted by the king or counts for services rendered. In other cases, these were laws written for a town or borough that gave them the right to control a certain trade (in Ghent: cloth). And, in some cases, these could be special laws that granted “immunity” or separate laws to a certain social class (e.g. nobility or clergy).

For Ghent, the “privileges” or laws were kept in a locked truck that was chained to the floor in the “secrecy room” of the Belfort where they sat until the concept of “privileges” was banned by the government. Atop the tower of the Belfry is the Ghent dragon, a small copper dragon on the pinnacle (1378) of the spire, which was placed there as a symbolic guardian of the privileges.

This dragon has since become a symbol of freedom and individuality for Ghent. The original medieval dragon is displayed on the first floor as you make your way up to the tower.