In Patershol, an area in Ghent known for its tiny streets, old buildings, and great restaurants, you’ll find two buildings that the people of Ghent call “heaven and hell.”

I’m not sure the reasoning behind the naming, they were pointed out to me by a local with the following description: hell is on the right and is a Thai restaurant, while heaven is on the left, and it’s heaven because it is a candy shop.

The two buildings are linked and the date on one is 1669, which was right smack in the middle of a volatile period for Ghent.

From Spain, 1669 was after the conclusion of the Eighty Years’ War (1568–1648), after which regions of Flanders formed a part of the independent Dutch Republic (independent from Spain); but, not Ghent, Brugge, and Antwerp, which were still under Spanish control.

From France, 1669 was a year after the War of Devolution where the French gained control of Belgium but had to return it to Spain with the forming of the Triple Alliance (1668) between Sweden, England, and the Dutch Republic (which was an alliance meant to slow the expansion of France). A few years later, the Franco Dutch War began (1672–78), and eventually put Flanders under French rule.

From England, 1669 was after the Second Anglo-Dutch War (1665-1667) where England tried to end Belgium’s domination of world trade, but before the Third Anglo-Dutch War (1672-1674) when England broke from the Triple Alliance and aided Louis XIV with the Franco-Dutch War.

All these wars were fought to determine who controlled the trade ports of Ghent, Brugges, and Antwerp, which were European economic powerhouses thanks to trade and geographical location.

And, back to the buildings…

I assume the “heaven/hell” naming is because one of the buildings is white and depicts scenes of everyday Ghent life, law, order, and government. While the other building is red and shows scenes of foreigners, people playing music, and other things I couldn’t quite make out. 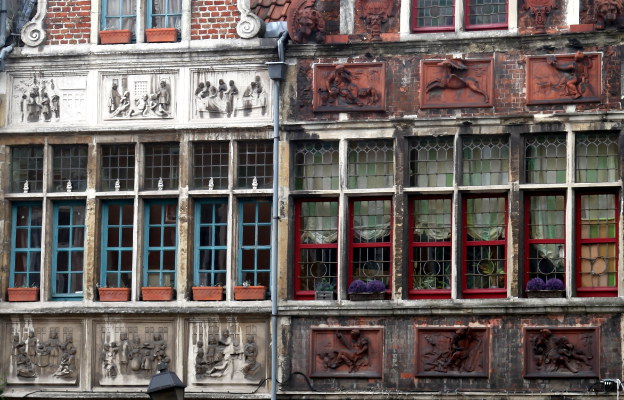 This seems a bit strange to me and perhaps it is a message. Usually when people depict “heaven/hell” it’s religious scenes with religious connotations. But in this case, the “good/bad” seem to revolve around ruling and government. Perhaps the “heaven” is self-government and autonomy. And, the “hell” is the disruptive influence that comes from outsiders.

Regardless, we visited the candy shop, which is a traditional little sweet shop where the proprietor scoops out handmade candies from little class jars and measures the portions on an ancient scale. In the shop are candies that are specific to and made only in Ghent: like Katrienspeks or Gentse trientjes. It’s worth a stop if you are meandering through the area.

0 comments on “Heaven and Hell, Ghent”Add yours →