The world beneath Paris is layered like a cake; and, this layered world under the city has evolved to match the world above in both complexity and in mystery.

First, way way down, are the catacombs, the caverns that house the ossuaries that we explored one rainy afternoon. The catacombs are comprised of 7-levels and 400-miles of unmapped, partially explored tunnels.

But the underground complexity doesn’t end with these limestone tunnels. Just under the surface, there is the sewer system: des Egouts. The first inkling of a sewage system in Paris was built in 1370 and gradually expanded over time. But this was a crude, inadequate system that was not fully “modernized” until the age of Napoleon. It was during Napoleon’s reign that Pierre Emmanuel Bruneseau constructed the 360-mile “modern marvel,” which was later enhanced by Baron Haussmann during his overhaul of the city. It’s this underground system that dignitaries and tourists flock to… and the one that Victor Hugo wrote about in Les Misérables.

But the sewers and catacombs are not the topics of this post; layered between these two is the city’s Métro and RER (Réseau Express Régional) train systems.

Unlike places like Chicago, Glasgow, Budapest, and London, Paris was late in developing its subway system. During the 1889 World Exposition, people rode by horse and buggy to sites (e.g. the newly built Eiffel Tower) and Parisians considered this a travesty for an “enlightened” city; so, by the World’s Fair in 1900, Paris had their first line of the Métro, designed to connect all of the city’s main attractions.

The entrances to these older stations are marked by gigantic wrought-iron snakes that swoop up and mark each side of the stairs that lead down into the tunnels. These were designed by architect Hector Guimard and have become his defining feature (bringing Art Nouveau to the Paris underground). 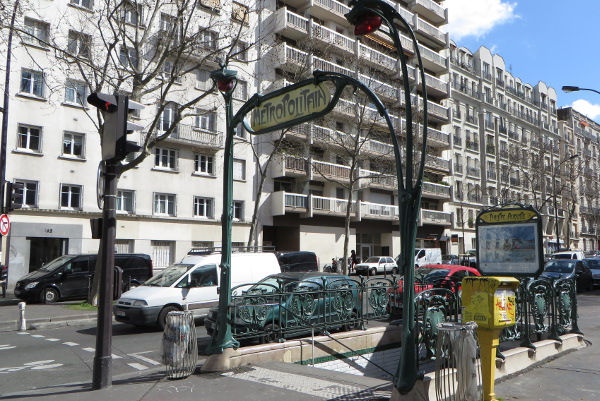 And, over the last 115-years, the city’s underground has evolved into a mass of stations, lines, and tunnels that look like a gigantic ball of yarn. The statistics are scary: there are 16 lines (numbered), there are 50 miles of corridors, 133 miles of tracks, and 303 stations (constantly changing). Even as a worldly train traveller I had some difficulty planning our trips and needed to write details down. 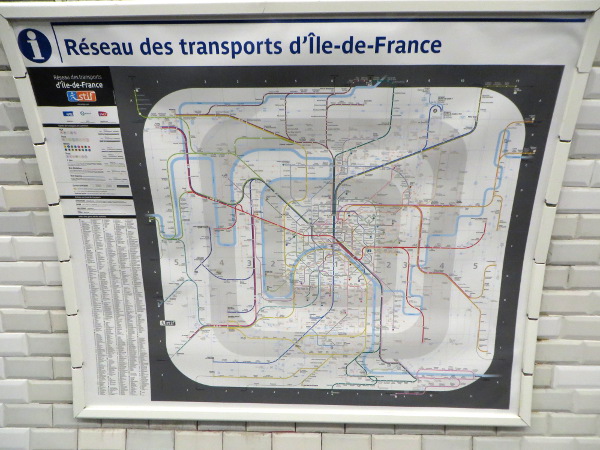 The city’s ghost stations add an even deeper level of complexity to the system. There are closed stations (Saint-Martin), hidden stations, stations that were built but never used (Porte Molitor and Haxo), faulty stations (the original Victor Hugo), stations that were shut down during WW2 and not re-opened until many decades later (Cluny), and stations that the trains whip through without stopping. We saw some of these during our brief time on the underground.

And, just when you think it couldn’t get any more complex, it does. Under all of this is the RER system: a high-speed train system that links central Paris to the suburbs. The RER contains five lines (lettered), 257 stations, and 365 mi of dedicated track.

We explored both the Métro and RER systems. The easiest (and hardest) part is buying a ticket. It took us a few times to figure out which option to choose on the machines and I’m positive we overpaid more than once. At some point, a very nice Parisian lady explained how the payment system works. The easiest thing to do is plan out and then purchase individual trips in one go. In other words, buy 10 one way tickets rather than try and plug in your destination on the machine each time. One ticket is good in any direction on any line.

0 comments on “Paris Underground”Add yours →