Most people come to Cimetière du Père Lachaise looking for Jim Morrison’s grave. Say what you will, but this small and a rather unassuming headstone (#8) gets a lot of attention and draws crowds. It’s not hard to find, just follow the people… and look for a security guard. There’s been periodic mischief in and around the grave so the family hired a guard to watch over the marker.

It all started a few days earlier at the Cimetière de Montmartre. It was here that we discovered that cats are an attraction at the cemeteries in Paris. At Montmartre, we found a rather large pack of aloof and snooty felines while exploring the graves around Adolphe Sax’s mausoleum. These cats don’t like people and will disappear rather quickly through a labyrinth of tiny but interconnected tunnels when you get too close. Imagine watching a cat disappear into a crack a few feet away… only to appear again from a hole in the distance.

This was extremely frustrating to La Niña who REALLY wanted to become friends with a cemetery cat and used every sneak trick in the kid handbook to try and get close to one. But they just simply disappeared here and quickly re-appeared over there.

So, after our cemetery visit, the kidlet spent the rest of the day in a snit because for the first time EVER her animal whispering superpower didn’t work.

Later in the day, I discovered rather accidentally that there are also cats that guard Jim Morrison’s grave. Up to this point, we had absolutely no plans to visit Père Lachaise… it was too far away and I thought the fanaticism surrounding Morrison’s grave not a good enough reason to make the journey.

But after a day of experiencing the snit, we made the trip in hopes of finding more cemetery cats. In hindsight, this was a good decision because there is so much to see at Père Lachaise: amazing views, wonderful works of tomb art, heart/gut-wrenching memorials for Holocaust victims, the graves of notable writers, artists and musicians, and pieces of Paris history that make the trip worthwhile.

Don’t believe me, look in the gallery to see what I mean. Some sections of the cemetery are simply breathtaking. And, Oscar Wilde’s grave draws more than its share of devotion. 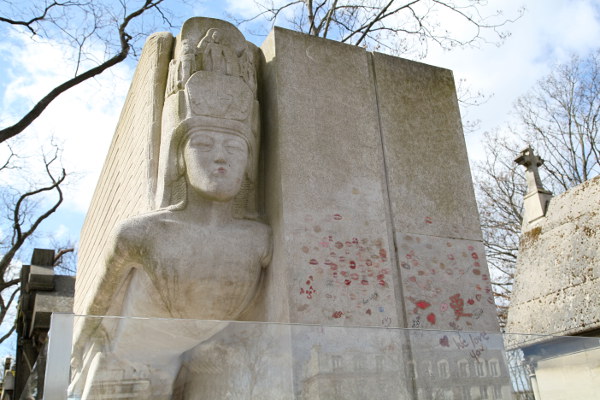 But, there was one cat who changed the Paris cemetery experience for La Niña: a cat that we named Angel. 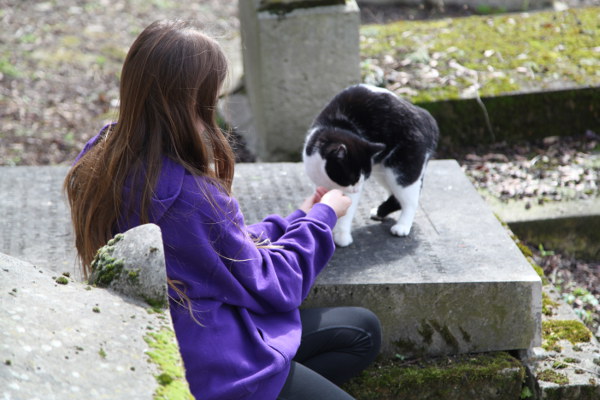 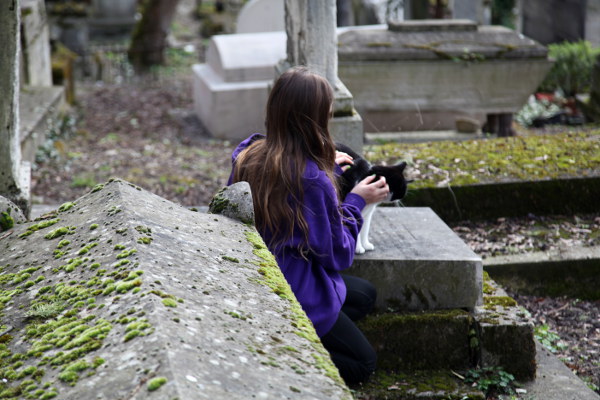 Angel (pronounced in the French way) came bounding by us rather suddenly as he/she was trying to half-heartedly catch a bird… and then decided to stick around and smother La Niña with undivided attention… all of which was reciprocated. It was a match made in heaven. 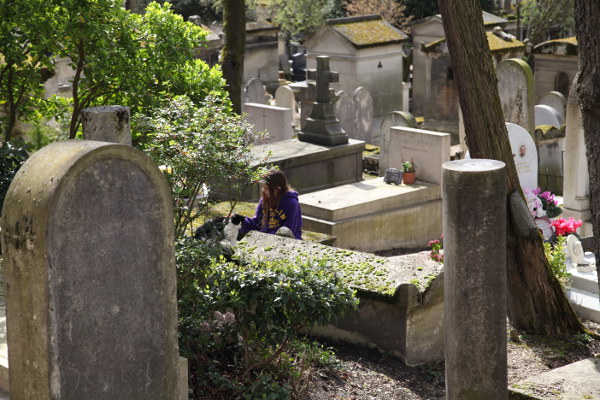 And, via all this attention and playful antics, Angel inadvertently took us on a tour of Père Lachaise and shared some of its secrets. In the end, all I can say is, Merci beaucoup, Angel. À la prochaine! We’re glad to have met you.