The Grévin is France’s equivalent to London’s Madame Tussauds… which is rather ironic if you think about it; not only was Madam Tussaud French, but she also created both wax sculptures and death masks for many of the figures now depicted in historical scenes in The Grévin (Louis XVI, Marie Antoinette, Marat, and Robespierre). But, there are no Tussauds in France.

While on a self-imposed exile in the UK, Tussaud opened her first museum in London in 1836. The Grévin came much later in 1882, opened by Arthur Meyer in the Passage Jouffroy and named after caricaturist Alfred Grévin. Rather recently, the museum expanded its brand and now has one location in Montreal (2013) and another in Praha (2014).

As mentioned above, the Paris location focuses on French personalities and history. The grand finale is a “rockified” gallery full of historical wax figures displayed in modern scenes… Paris style. 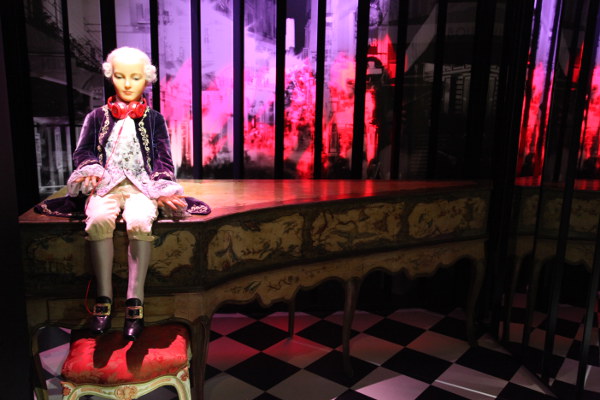 However, the pièce de résistance in the musée is not the hall of mirrors you have to pass through to get to the museum (built for the Exposition Universelle in 1900), or the expansive and detailed Grévin Theatre in the heart of the building (which held magic shows in the late 1800s and showed Émile Reynaud’s first cartoons in the 1890s), nor the extremely large wax collection of French personalities.

Rather, it is a nondescript piece of history hidden in plain sight with the wax figure of Jean-Paul Marat. Marat was one of the fiercest defenders of the poor during the French Revolution. His articles, newspapers, writings, pamphlets, and posters lambasted the most influential and powerful in Paris; and, the backlash from this drove him into hiding. Even after the dust settled, Marat stayed in hiding because of a debilitating skin disease that forced him to spend most of his time in a bathtub, the only place where he could find relief.

While sitting in a regular medicinal bath, Marat agreed to talk to a young woman Charlotte Corday who claimed to have important information about fugitive Girondins. But instead of sharing vital information, Corday stabbed Marat in the chest with a kitchen knife. He died almost immediately.

The original shoe-shaped tub that Marat used for his medicinal baths and the knife used in his murder are both in the museum and are a part of the Marat display. 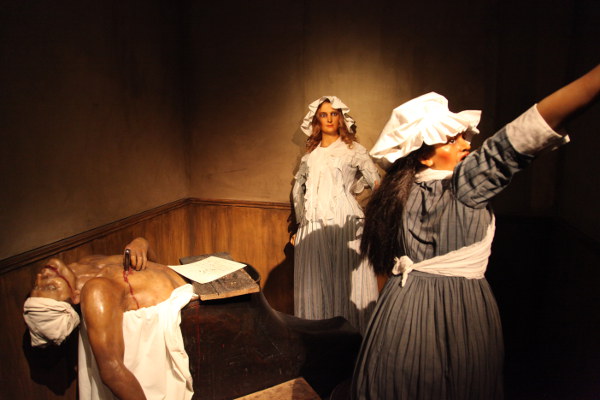 However, in the end, the best part of the museum experience is how thoroughly La Niña enjoyed embedding herself into the various scenes. Enjoy the photos!