Arrrr… and welcome to the Ventura Aarghbor Village, and with that, we were warmly welcomed to the area. It was early in the morning and the droves of people still had not arrived. This is what we were told, and that on the previous day there were so many pirates out and about that it was standing room only along the pier.

After the warm welcome, we were promptly given a smoking grenade… and told to quickly do something with it… so we took a picture, handed it back, took another picture, and we moved deeper into the pirate village… after learning a bit about flintlocks and swords. 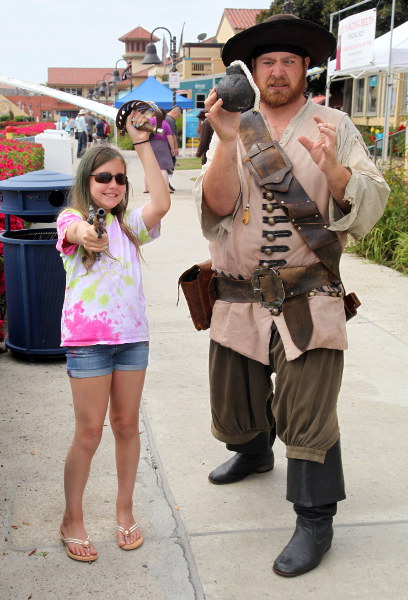 Our goal was twofold, to enjoy the morning with a walk along the pier. And, to see a few pirates. Seems like the later goal wouldn’t be much of a problem but the first one, perhaps. I knew we’d get stuck right away at the village because this seemed to be where all the action was… because Captain Jack Sparrow was there… and Will Turner and Captain Hook… and Tinker Bell.

How could we move on?

If Ventura has a pirating history, I could only find smatterings of detail about it. There’s the story of Hippolyte Bouchard, the Argentinian who worked his way up the pacific coast, looting and raiding along the way. In California, he attacked Monterey and Santa Barbara and when the Fathers heard word that he was going to attack the San Buenaventura Mission after a raid on Rancho Nuestra Señora del Refugio (1818), they gathered their valuables and headed into the hills.

But, the attack never came because Bouchard arranged a deal with officials in Santa Barbara… in exchange for the release of his men taken at Rancho Nuestra Señora del Refugio, Bouchard would leave the area. But, he didn’t go far. After leaving, he attacked San Juan Capistrano.

Beyond Bouchard, I’m not sure there are any other “pirates” (Bouchard was also known during his lifetime as California’s only pirate) but there was plenty of territory marking and land grabbing from the fur traders.

Anyhow… we found out about the pirate festival the previous day when we heard one of the harbour’s tallships firing a canon. 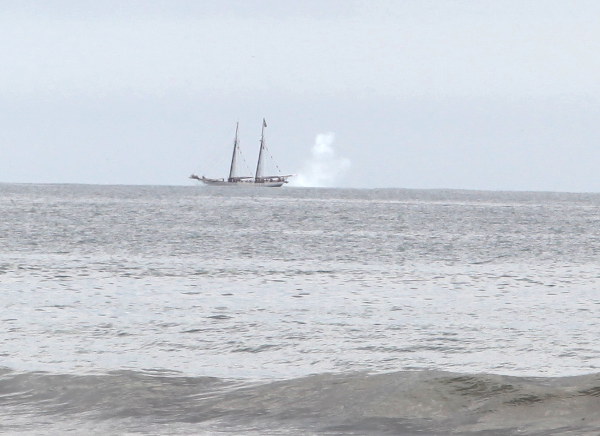 Wondering what this was about we did a bit of asking around and were told about the Pirate Days Festival. This is the 10th year of the event and it draws lots of people to Ventura who dress up and play the part. Seems like a perfect event for all the “Jack Sparrows” that work Hollywood Boulevard… but in this case, all the events, photos, and play-acting is free and done in good old fashioned fun.