As you meander down Route 66 towards Arizona from California, you’ll inevitably stumble upon a little place called Ludlow. There are so many small abandoned towns in this area but the thing that makes this one stand out is its position at the crossroads of the I-30 and Route 66… and also its natural location for a gas/coffee/food/bathroom break.

People get confused when they see Ludlow. Even while buying gas I heard the that’s it?‘s and the what’s next?‘s. The interwebs scream out: there’s nothing there. It’s really boring. What people don’t realize is that there are three faces to Ludlow, all layered one on top of each other.

The first face is the railway town that is slowly being absorbed by the desert. The interwebs refer to this little town as “a water stop for the Santa Fe Railroad” that cropped up after the railway construction in 1882. But here is where the real history is. This little stop was really so much more.

In 1900, when gold was discovered at the Bagdad-Chase Mine 10-miles away from Ludlow, the “water stop” suddenly became an important junction as ore was sent to Ludlow on a newly constructed Ludlow-Southern Railroad… to be shipped off to Barstow for milling. Milling couldn’t be done in Bagdad because there was no water.

Further to this, Bagdad-Chase was declared a “closed camp” meaning no alcohol, no girls, no gambling, no dancing, no fun. And, for those miners looking to blow off a little steam on the weekends, the next best choice was Ludlow where numerous entertainment businesses saw investment “potential” and set-up shop.

Not long after, Francis Marion Smith (of 20 Mule Team Borax fame… mentioned in the Calico post) had grand dreams of building a railway line that he could use to ship borax from California to Nevada, but these dreams were dashed when backers failed to support him. Instead, he opted to connect his Tonopah-Tidewater Railway to the Santa Fe Railway system and put the headquarters in Ludlow. Construction finished in 1907 and this is when things got really crazy for the town.

The ever-growing area now had a school, a church, a business district with stores, hotels, cafes, a post office, a bathhouse, tennis courts, pool halls, bars, and more than 500 people. The town thrived until the 1920s when mining and shipping declined. The Great Depression signalled the end of the Tonopah-Tidewater Railway, but by this time many residents had already moved on to the town’s second phase.

In 2015, there is not much left of this rendition of Ludlow beyond a tiny little graveyard, burned down structures, a building or two destroyed by a 2008 earthquake, an old dump, and abandoned cars. This seems like the kind of place where people would go to shoot guns and blow things up; it made me wary. A train line still runs through this long-abandoned Ludlow but doesn’t stop. 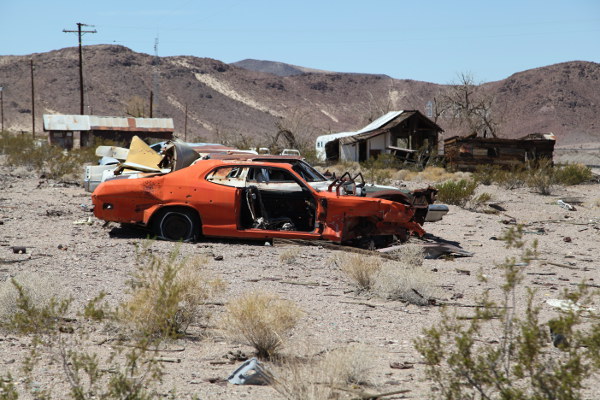 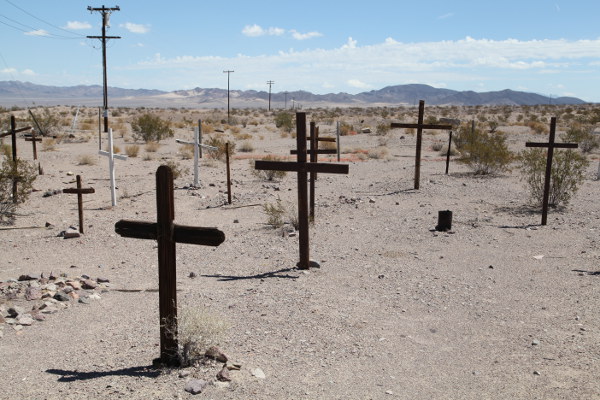 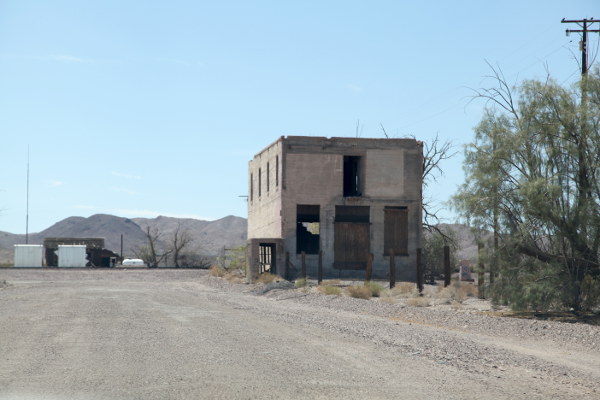 The second face of Ludlow appeared when Route 66 was established in 1926. Townies from the original Ludlow packed up their stuff and moved a few hundred feet to the Mother Road and made their living by providing gas, food, lodging, and automotive services to weary travellers.

Route 66 saw a “travel boom” following World War II when more people could afford automobiles and could travel outside of their communities. Population numbers in this revised town peaked at 150. The impact and value that Route 66 had on communities are evident when in 1962, locals fought proposed changes to the road.

Victorville and Barstow, out on the Mojave Desert are up in arms. It seems the state is toying with the idea of taking U.S. Highway 66, famed in story, song and TV’, away from them. The California Highway Commission has plans, it is reported, to route 66 through San Gorgonio Pass as far as the Twenty-nine Palms Road and thence northeasterly through the Little San Bernardino range, to Twentynine Palms and on to Topeck on the Colorado River in Arizona.

You can’t blame Victorville and Barstow for protesting. Highway 66 has a certain glamour which they share. It was one of the first transcontinental highways and has been glorified in stories, music and on a TV series. If they want to shorten 66 why don’t they also eliminate that back-tracking stretch into San Bernardino and cut across from Etiwanda to Devore In Cajon Pass?

What locals should have been more upset about was the proposed Operation Plowshare, a plan that would detonate 22 nuclear devices in the Bristol Mountains to cut a roadway and straighten the I-40. In the end, the plan was scrapped due to logistics and not protests.

Fighting changes to Highway 66 was all for naught. By the 60s, the I-40 had all but killed the road. This is rather ironic to me since the two routes run literally side by side. The only difference between the two is there are tons of cracks and potholes in R-66 but lots of opportunities places to stop and explore.

In Ludlow #2 in 2015, all that remains are a few crumbling houses, a vandalized garage, and empty buildings. In all the images of Ludlow on the internet, there is always at least one photo of the iconic Ludlow Cafe. Strangely, I don’t remember seeing this cafe. I photographed all the buildings in the area but I seemed to have missed this one, which makes me wonder if it was still there in a state that could be photographed. It’s possible that I missed it. 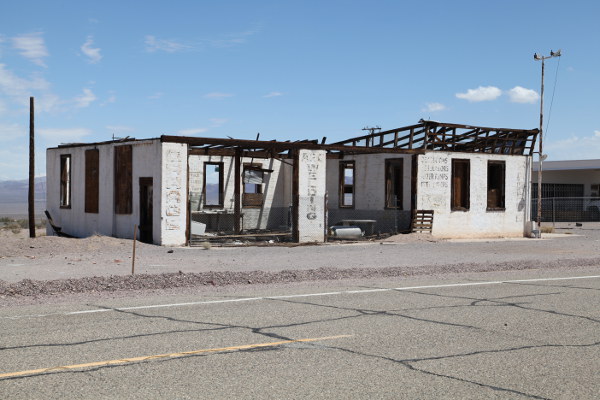 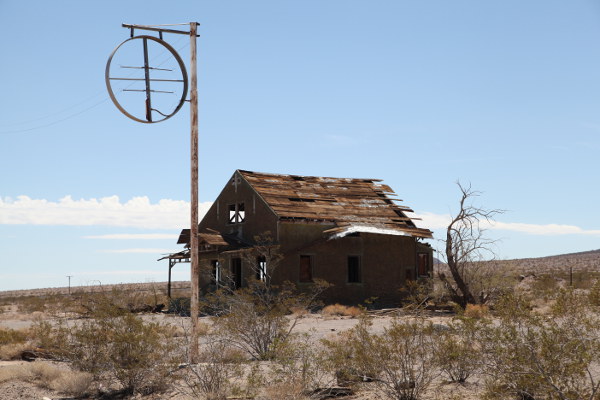 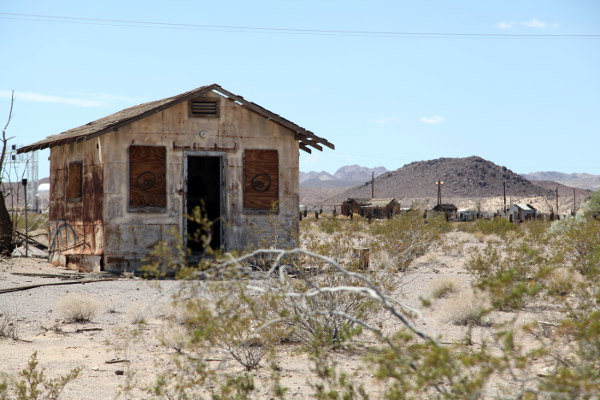 The “current” face of Ludlow houses a “Ludlow Cafe,” hotel, and a Chevron gas station… and if you are on the other side of the Needles Freeway (I-40), you’ll find a 76 gas station with a Dairy Queen inside.

It’s rather ironic that this busy little place is a stop along the I-40, the road that killed the original Route 66 and subsequently the town… and is less than a mile away from Ludlow #2.

The “Ludlow Cafe” here looked like a promising place to stop for food; it has the potential to be very busy given its proximity to gas and the Interstate. It also happens to serve all-day breakfast, which I am a sucker for.

When I walked in there were only four tables occupied. After waiting for 10-minutes, a harried waitress came over and out of the blue said, “You might as well leave, I won’t even be able to talk to you for another 45-minutes we are so busy.” I looked at the 4 occupied tables (with 2-3 people at each) and could almost hear crickets in the background. It was like something out of a cartoon and I’m pretty sure my stunned silence was telling (considering I hadn’t even spoken yet).

It’s clear that this place does not see a lot of people. This is when my spidey senses started to go off and after years of travel, I’ve learned to trust my spidey senses. So, I opted to leave and head to the next town with a diner along Route 66. 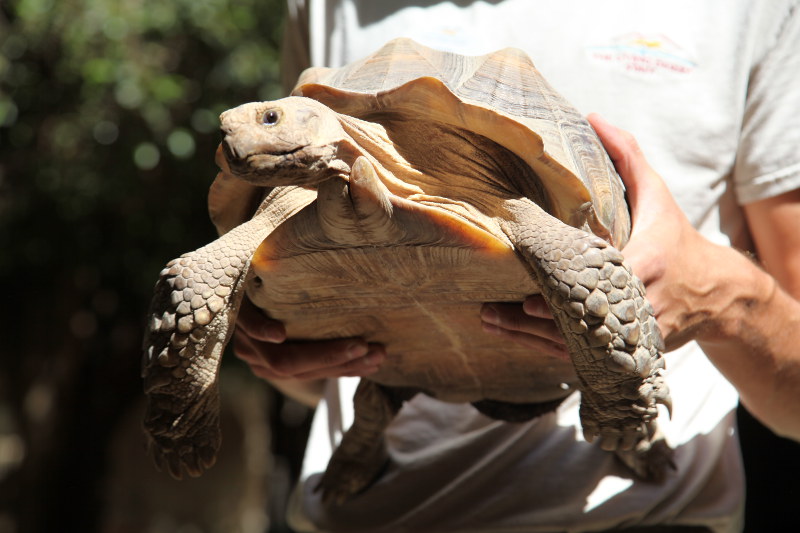 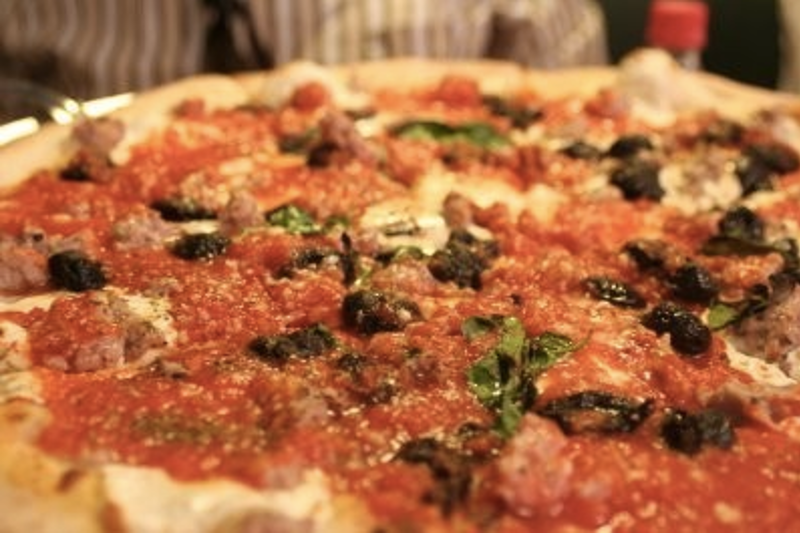 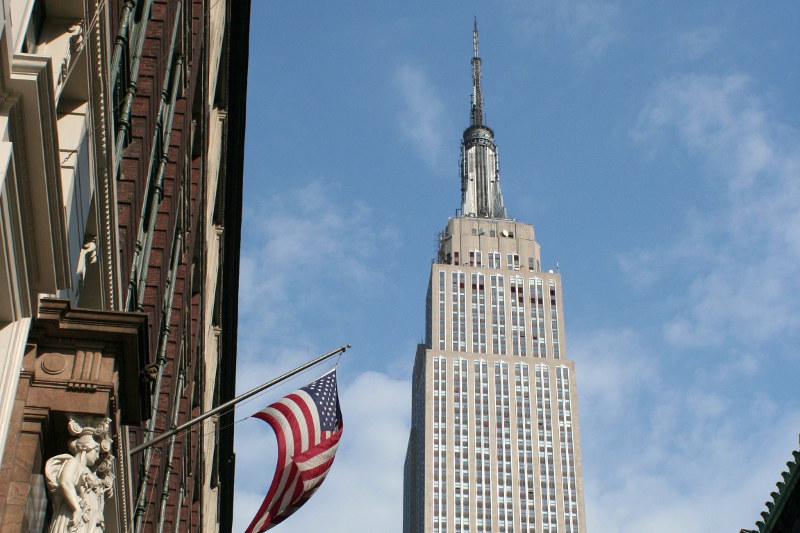