The Calico Ghost Town by itself told me very little about the silver mining community that once existed there. The history was pretty typical and vanilla and exactly what I’d expect for a pay-to-enter family park. There’s tons of information about Walter Knott, dogs, doctors, school teachers, and hotels but not really a lot of the stories you’d find if you were exploring the social history of a mining town.

But… the graveyard told me a whole heck of a lot more about the people and their lives in Calico. When names like “Death Valley Helen,” “Calico Kate,” “Jeremiah Mountain Man,” and “Tumbleweed Harris” appear on the headstones, I know there are some good stories lurking out there waiting to be told, but I’d probably also have to do a lot of digging through archives, death records, and printed history books to find these stories.

The truth surprised me. What I discovered is that the people I just listed were people associated with the park and who were buried under tombstones showing their “street” character names. They are legitimate graves and their burial in the cemetery doesn’t devalue their love and commitment to Calico or the good work they’ve done at resurrecting this little mining town; what it does show is that I really had to dig through historical documents to find the truth.

The miners, prostitutes, school teachers, and families who were a part of the silver/borax mining community of Calico in the 19th century (and buried in the cemetery) were long forgotten by the 1950s. So, in an attempt to improve low tourist numbers, Park Rangers created fake grave markers with stories and randomly placed these throughout the cemetery. It was only in 1981 when the park decided to find out who was really buried under the piles of rocks scattered over the hill, that they took on the daunting task of trying to identify people in the cemetery. Rangers were partially successful and at the end of their endeavour in 1981, only 49 of 160 graves were identified. I don’t know what this number sits at today. There aren’t a lot of markers in the cemetery.

Most of the wooden recreated “historic” headstones you see now are unreadable because they have either been ground down by blowing sand or have completely deteriorated (most were wood). But stories of the miners, children, women, and people buried in the cemetery are littered throughout newspaper clippings, coroner reports, and oral histories. The stories are there… but where the bodies lay is a mystery.

Information was received yesterday from Calico, San Bernardino County, to the effect that Anastacio Rubio, the eldest son of Don Jose Rubio, one of tho oldest residents of Southern California, had been killed at that place on the 25th of May. A man by the name of Ygnacio Moreno brought the news to Los Angeles at noon on Thursday. Moreno is a man about fifty years of age and thoroughly reliable. He says that on Friday of last week, Mr. Rubio came back to Calico after hauling a load of ore, as was his custom, to the quartz mill. He had six dollars in silver and eighty dollars in gold in his pocket, and began treating his friends. After the silver was exhausted, he displayed the gold, which excited the cupidity of an American present, who followed him out of the saloon and killed and robbed him, one shot entering his right temple, and the other in the center of the heart, killing him instantly. A coroner’s inquest was held, but it appeared that all of the company present had their backs turned at the time of the shooting, the murderer was discharged, as also by the Justice of the Peace, on the same ground… Don Anastacio was buried three days after his death, by some of the miners.

The grave for Anastacio Rubio is somewhere in the cemetery, but no one knows where. Here are other stories… 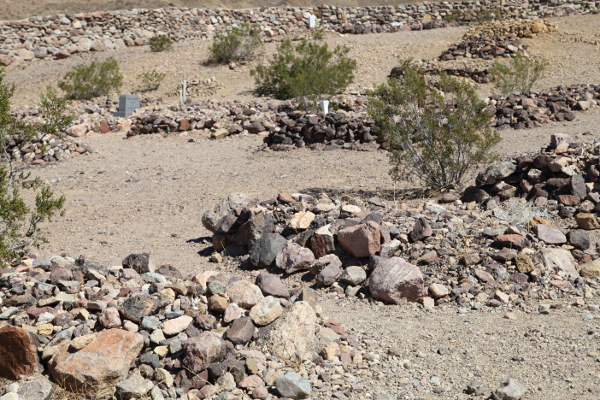 1889 was a bad year at Calico for fires, robberies, assault, murder, and gunfights. In September of that year, Harry Dodson robbed the Runover Mine Superintendent James Patterson and took off with the payroll ($4,395 which is the equivalent of $112,692.31 in today’s dollars).

When the law didn’t respond quickly enough, Parker formed a “posse” that included himself, an aboriginal tracker, and the Saloon owner. They found 22-year old Dodson the next day and killed him in a “gunfight.” His body was brought back and buried in the cemetery.

The coroner’s inquest lists his death as a justifiable homicide at the hands of J.L. Patterson and John Ackerman (the saloon owner). 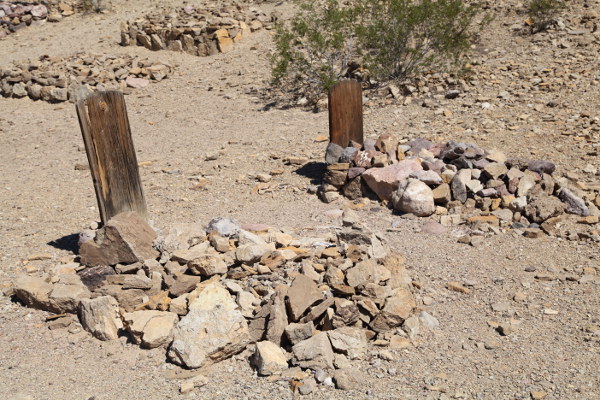 The children listed above illustrate how difficult life was in a mining community in the middle of the desert. Not only was there a constant risk of death through exposure, fire, cave-ins, insect/animal bites, and accidents, but the disease was deadly to children in a world where vaccinations did not exist.

In 1888 a diphtheria epidemic swept through the mining community and killed several of the town’s children. Among them were Bruce and Eva Cochran who were the children of Emma and William Cochran who ran the boarding house. The location of their graves is unknown, but some of the piles of rocks are significantly smaller than others.

I couldn’t find any historical documentation on Robert Stevens or Ernest Rowe, but those are two known families who lived in Calico at the time of their death. Also, one grave, that of Bruce Wallin, was originally thought to be that of an 8-year-old boy who also died in the diphtheria epidemic. However, researchers later discovered that “Bruce” was a family dog and that many of the graves in the cemetery hold family pets as well as humans. 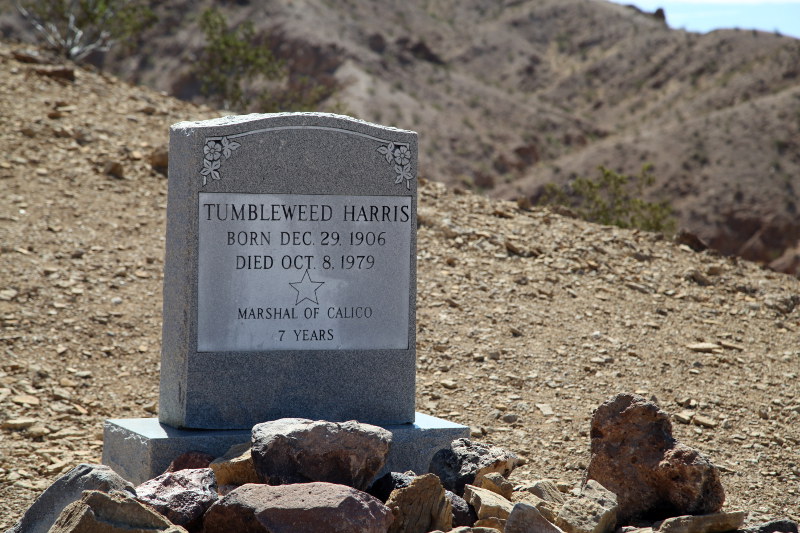 Donald Willard “Tumbleweed Harris” was the law in Calico… for 7-years, according to his headstone. I’m not sure when in his life he would have taken on this role but in the 1950s he worked in both Calico and Knott’s Berry Farm as a street character and several other odd jobs. This is how he got his name, he wandered over the desert like a tumbleweed.

Born in New Jersey in 1906, locals describe Harris as being a big man with a white beard and a large personality. He loved Calico and the wild west so much that he requested that people attend his funeral in period costumes. His is the first of the burials showing “street” character names and is likely where the tradition started. 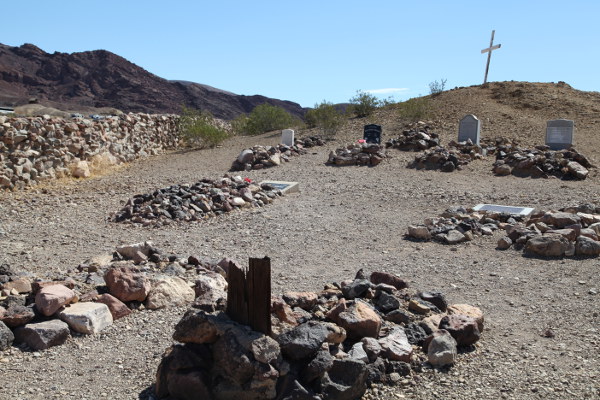 Daisy Dooley 1887. Came to town one day and wasn’t long before she was led astray. She’s in a better place today we pray.

Referred to as a “soiled dove” this tombstone eludes to one of the necessary traditions that come with mining towns: prostitution. And, even though there have been numerous attempts to study Calico’s prostitution history, these women lived in the shadows and not much is known.

What is known is that Daisy’s tombstone is fake. There never was a Daisy Dooley at Calico. She was created in the 1950s by rangers to try and attract tourists to the area. And, while the legend of Daisy Dooley has persisted in books and on websites, she was not a real person… beyond being a fictional face/voice/story for the real women who lived in the shadows. 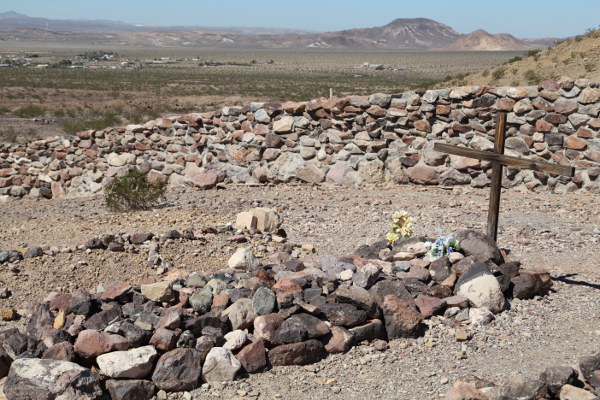 One story that I did run into numerous times in historical records is that of Albert Roland, a mining broker from Los Angeles who was in Calico on business. In what is reported as the last gunfight in Calico, Roland was involved in a card dispute at the Dickerson and Mosely Saloon early in the morning on May 17, 1896. During the dispute, he was shot and killed by Edward Scollard who was later sentenced to 7-years at San Quentin.

The coroners report on May 27, 1896, lists the cause of death as Homicide- gunshot wound at the hands of Ed Scollard during fight. He was buried in the cemetery.

I’m going to take away a bit of the Wild West shoot-it-out romanticism of this story and give it a twist to show the human impact that this murder had on the community: this article comes from the San Francisco Call, Volume 79, Number 172, 20 May 1896:

A Coroner’s Jury Decides That the Murder of Albert P. Roland Was Unjustifiable. SAN BERNARDINO, Cal.

Roland by E. P. Scollard at Calico on Sunday were brought to this city today. It was a gambling and saloon row. Scollard was a recent arrival at Calico and claimed to be a mining man, but spent most of his time at the gambling table and the bar of the saloon. All of Saturday night was passed in the saloon by a party of six men, including the principals of the tragedy. There was a preliminary row which was quelled by the saloon-keeper and others. At a later hour the quarrel was renewed. Scollard drew a revolver and struck Roland in the face with the butt, and Roland finally drew a small pocket knife, but did not open it. Scollard fired at Roland. The bullet took effect in Roland’s breast, and death ensued in thirty minutes. The murderer did not attempt to escape and was taken in charge by a constable. Coroner Keating was notified and held an inquest. The jury found the Killing to have been unjustifiable and charged Scollard with murder. Roland was only 25 years of age and leaves a widow and two children, who reside in Los Angeles. Mrs. Roland was telegraphed for and arrived in Calico after the inquest, she had been left destitute and a purse was at once taken up among the men of Calico to defray the funeral expenses. They also gave the widow $100.

Sentenced for a Calico Killing

BAN BERNARDINO, Cal., July 24.— A deputy Sheriff today took E. P. Scollard north to serve his sentence of seven years’ imprisonment in San Quentin. On May 17 Scollard killed Albert P. Roland in a saloon fight at Calico, in this county. At the time of the tragedy two men were fighting over a game of cards, and Scollard attempted to separate them. One of the men then attacked Scollard, who drew a revolver and fatally shot Roland.