Fall in Southern Alberta can be rather unpredictable. For example, in September the city sees rain, heat, intense wind, and snow. But, this year the unpredictability is rather off the charts and all the wet weather and bursts of freezing has made it really hard to keep up and determine what to do with the vegetation around the house.

The flip side to this is that all this rain means that on the other side of the mountains (Vancouver) they are likely getting lots and lots of sun, and Vancouver… damp, musky, mildewy, perpetually wet, rainforest Vancouver… is in the midst of a drought.

In Calgary, all this rain also means that when the sun comes out, everyone rushes outside to partake in as many mountainy, outdoorsy, nature-loving activities as they can before the warmth and sun disappear. Mid-September we opted to go sailing with Kevin the Neighbour and Linda the Neighbour during one such sunny weekend. (Update: Rob the Neighbour has left Canada and has taken his crazy antics with him; don’t feel too bad for the now-much-older Stryder because Kevin has taken on the role of tormentor when Stryder can handle it.)

While on the water, we used the opportunity to try a new wine from the Okanagan: Red Rebel. 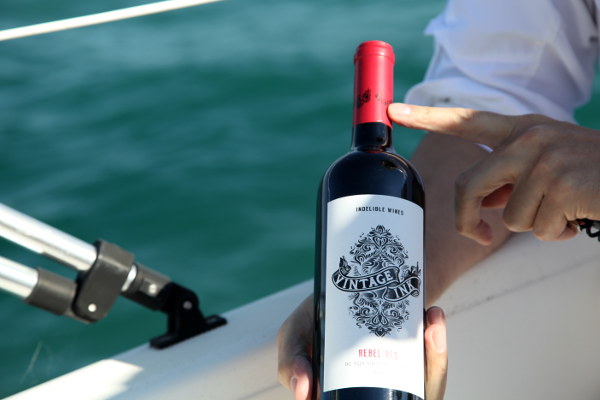 Trying to find out which vineyard in B.C. produces this wine was a bit like looking for a needle in a haystack, which in my mind means the wine is probably from the U.S… but produced in the Okanagan. Seems it is a New York Company that owns the brand. Vintage Ink was first introduced by Constellation Brands in California in 2003, then to Ontario in 2009 (under the Vincor subsidiary), and has now popped up in the Okanagan (2014).

As such, the first thing that stood out was how young the wine was; everyone completely nailed that. No older than a year, was the resounding comment. It’s likely we were drinking one of the first batches to come out of the Okanagan.

The wine advertises itself as full-bodied, intense cherry, spice soft tannins. The word cherry did come up multiple times while we were drinking so it is noticeable, but not too overpowering. I found this medium-bodied rather than full.

Also in the advertising, there is a comment that says this wine will go well with steaks, but I’m going to disagree. I’m thinking this is more of a cheese wine. Sweet and meat don’t make a great combination… perhaps sweetened pork, but not good Albertan, grass-fed, beef.

0 comments on “Sailing and Okanagan Wine”Add yours →