Before even hitting the ground in Omaha, I’d been told repeatedly that the city has one of the best foodie scenes in North America. The internet writes about it. Yelp talks about it. People are constantly telling me that the food here is unparalleled.

I will point out that there is no shortage of coffee shops in Omaha. Below is a one-week sampling. 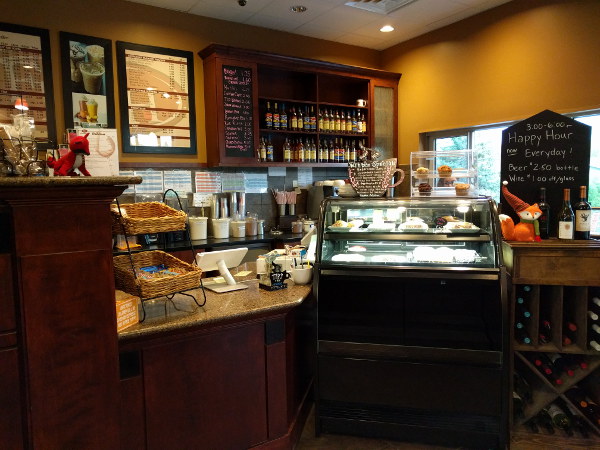 The first stop on the coffee tour: Fox Hollow. It’s located in West Omaha and was really convenient to get to (off Blondo). It shares a building with a donut shop.

I will say that the fake stone, dark brown, earthy look of the 2010s is starting to wear me down (every house we looked at in Montreal has this look). This place has it in spades. Dark, gloomy, yet cold at the same time. Not only does this place offer caffeine, but it has a large collection of craft beers and wine.

The verdict: Overall, my coffee tasted like a Starbucks coffee: overly sweetened, on the edge of bitter, and the portions are larger than you can drink before the coffee gets cold.

I did like the little monkey sticker that they put over the lid hole (could be a fox but it looks like a monkey). However, it wasn’t enough to redeem the coffee so we scratched this one off the “we will return” list.

Just like in every city in America, Omaha has a Starbucks on every city block. And, just like every other American city, Omaha has countered with their own local chain: Scooters.

I had to try Scooters. Everyone in the office carries their signature brown cup and I will admit that local chain coffees have made me really happy in the past: Peet’s (San Francisco), Tully’s (Seattle), Stumptown Coffee (Portland), and Jittery Joe’s (Atlanta/Athens).

This case: not so much. I think the focus here is on getting coffee out fast to people on their way to work. We looked for a “cafe” but only found drive-by kiosks. I can’t even remember how the coffee tasted so it ranked in the meh category. It’s off the “we will return” list. 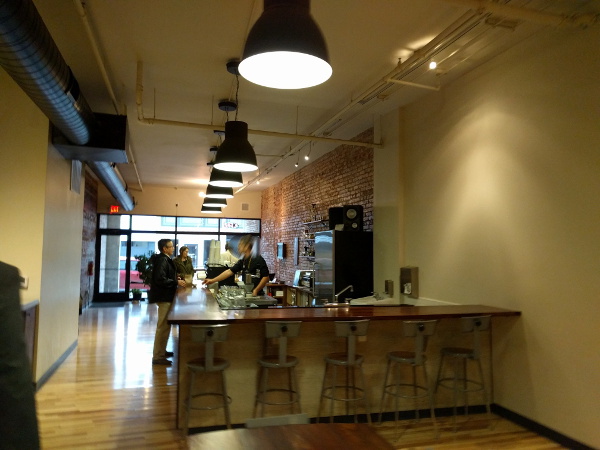 Archetype is close to the University of Nebraska Omaha. It is a massive, massive space with very little in the way of seating. So this could be because they’re new and just not set-up, or because it’s a stand-up coffee shop that frequently hosts events and live musicians.

Either way, it has all the makings of a university haunt. The one thing that did irritate me is the lack of soy milk. A lot of the “hipster/high end” type places get rid of soy in lieu of almond milk (which becomes the only alternative for those of us who are lactose intolerant).

That’s great, but if you’re going to do this, make sure you know how to heat almond milk. Because if heated improperly, almond milk gets incredibly bitter. In this case, the coffee tasted like I was licking the bottom of a leather boot after someone’d used it to walk through a pit of lemons. It was pretty f**king terrible and as an added bonus it was served with attitude.

Archetype is definitely off the “we will return list.” 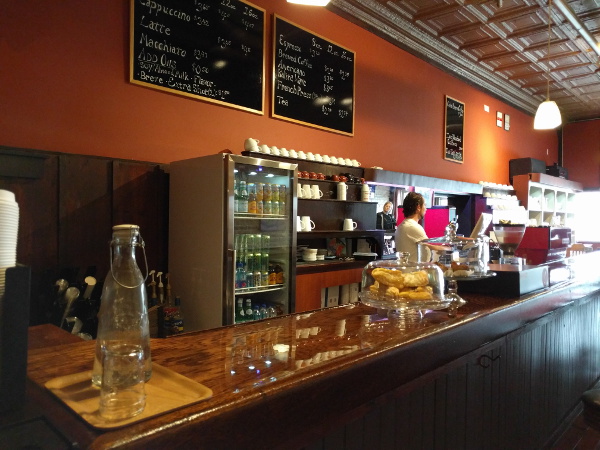 By the time we got to Howlin’ Hounds, we began to think that everyone is right: there is no good coffee in Omaha. Granted there are tons more places to try (see the “to be continued” list below). In order to be sure, we drove a lot further to a place that has a 5-star rating on Yelp (with over 60 reviews). I’ve never seen this before and the quality of coffee here will determine (for me) if the bar in Omaha should be set low.

Howlin’ Hounds is a great little space run by a dynamic, chatty, eclectic guy. He is the secret sauce for this coffee shop and the love and personalty he’s poured into the establishment is apparent. This is definitely a quality university haunt. The front contains a coffee bar with wall/bar seating; the back is a library with plenty of space for tables, bands, and events. I’d come back for the vibe alone.

The coffee was good. It wasn’t off the charts delicious but it was the best in the city (so far). The soy used was organic, earthy soy that adds it’s own flavour to the drink. It wasn’t bad but my preference is always to taste good espresso over good soy; and, there are soys out there that taste just like milk (if not for lactose intolerance I would never touch soy). T’s Americano was perfect.

Howlin’ Hounds is on the “we will return” list.

I’m not done yet. I only had 4-days of exploratory coffee goodness in the city. But, I’m heading back and for the next visit, these shops are one the list: A Hill of Beans, Mug Life Coffee Lab & Roastery, Omaha Bicycle, and Crane Coffee.

0 comments on “I Will Find Good Coffee in Omaha!”Add yours →